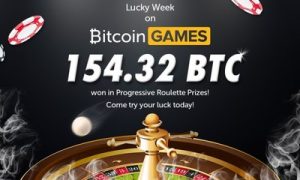 The online casino Bitcoin Games has recently announced that 11 players have split 154.32 BTC in prizes in a single week during play of its Progressive Roulette game. This was the payout from one single game of chance hosted by one single online Bitcoin casino in one week, so Bitcoin gaming can be big business with big payouts, if the gamer is willing to accept that the house will always have the edge even when it claims to be “provably fair”.

Bitcoin Games likes to brag that it’s one of the fastest growing Bitcoin casinos with a streamlined back end, which is probably not surprising considering that it’s a subdomain of Bitcoin.com. It also doesn’t require user registration or login, although you could use Authy or Google Authenticator if you wanted to. Just a quick visit will give you a completely anonymous user “account” that has been randomly generated.

It’s notable that Bitcoin Games will not pay out in Bitcoin to players living in nations like the U.S. due to regulations that put playing online games for actual money in a legal gray area at best. This may disappoint anyone who likes a good game of blackjack. This could be gotten around with a good VPN but is something to think about if you live in a nation with federal regulators that seem to have a pickle up their bums when it comes to gambling. (Think of it as being similar to Prohibition, if you like. It didn’t stop people from brewing moonshine. They just learned how to keep an eye peeled for federal enforcers.)

While I might agree that regulators need to realize that this is the 21st century and people are doing just about everything, including playing games, online these days, this is usually about where advertisements for casinos are required to tell you that you should contact an organization like Gamblers Anonymous if you have a gambling problem. A newcomer could join Bitcointalk right now because he or she wants to find out more about Bitcoin, and then get discouraged because so many members are joining signature campaigns for casinos and other shady ventures. While I might like the occasional card game as much as the next person, we shouldn’t be scaring off the noobs by advertising mostly casinos and shady pyramid schemes.

I get it. Gambling is where the money is. However, one thing that should be pushed more on site like Bitcointalk is that you could use Bitcoin to pay for web hosting or register that domain you always wanted at NameCheap, buy high-end luxury items on BitPremier, find somebody who can whip up a quick logo design on Fiverr, or even buy a Tesla with Bitcoin in some cases. (Keep in mind that some of these ecommerce sites do have an affiliate program. Basically, they’re promotable to anyone who might not go in for gambling but might be willing to buy a vacation home with Bitcoin.)

So it’s an image thing. Bitcoin gaming sites could come off looking like the Las Vegas of the online world – and some Las Vegas casinos are notorious for historical connections with the mob. Newcomers might be encouraged to try a few hands of Blackjack or some spins at the roulette table, but they’ll walk away if they’re not all that impressed or have moral, ethical or religious objections to gambling. They’ll also walk away if gambling sites add to the impression that they could lose their shirts with Bitcoin (That happens too.) So Bitcoin Games can brag about its increasing large progressive prizes, minimal house advantage, and lack of registration requirements while the rest of us bang it into the thick skulls over on Bitcointalk that they might not be making a good first impression with their grumpiness and their signature campaigns that push shady casinos.