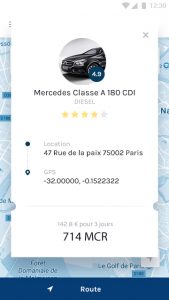 What do you dislike most about hiring a vehicle when you go on holiday? Perhaps you dislike wasting your time at an agency that requires you to fill out paperwork before you can drive the vehicle, and they may not even have the model you requested when you booked it online. You may have just gotten into Paris dead tired because your airline rescheduled your flight at the last minute and you don’t feel like messing with the car rental agency. MiCars aims to solve that problem with a smartphone app that saves you time and makes it easier to just get in the vehicle and go.

The app makes it easy to book your vehicle, pay for it with MiCars tokens or bank card, and receive an NFC virtual key that can be used to unlock the car on your smartphone. That means nobody’s going to drive off with the vehicle that you booked unless you lose the smartphone you used to book the car. It also means that you no longer have a big hassle if you have to book a vehicle at the last minute and there’s a MiCars station near you.

When you’re done with the car, just drop it off at any MiCar station and use the smartphone to conduct an inspection and take pictures. This saves the worry of having any nasty surprises on your bank card if the agency finds one small problem with the vehicle.

MiCars Has Plans to Operate in Several Countries

According to the roadmap, MiCars should have already formed agreements to open stations in ten cities around the world. After the Pre-ICO (currently ongoing) and ICO (set for launch in January 2018), MiCars will develop the app and deliver vehicles to cities in France, Germany, England, Belgium, Canada, and Switzerland in early 2018, with plans for expansion into the U.S. and Russia in 2019. A long-term hire proposal is also slated for 2018.

I know, right? Apparently MiCars is so new that I could only find an actual rating on ICOBench, where it rates 3.0 stars out of a possible 5. ICOBazaar had a “TBD” on the listing and there was nothing on TrackICO. I might wait and see if ICOBazaar and TrackICO give5 them a better rating than ICOBench before I decide to throw a little money into the pot.

Slightly less encouraging is the idea that I often have to jump through hoops just to find information outside of MiCar’s official website, WhitePaper that has been written in plain English for non-techies, and Twitter feed. Three of the four staff members listed on the website’s front page do not have actual links to their LinkedIn, though I was able to find them with a LinkedIn search. There’s not much news on the usual cryptocurrency and blockchain news sites. On the one hand, lack of news could be taken as a good thing because it could just mean that MiCars lacks drama and it hasn’t been aggressively pursuing a media presence. On the other, it would have been interesting to see what my fellow technobloggers think of it.

On the plus side, the communications team does seem to be responsive about answering questions on the Bounty post and ANN post on Bitcointalk. Good communication is key to building a business that investors and potential future customers can trust.

The good part is that, if you invest and MiCars launches successfully, then you can redeem your tokens for a rental car the next time you go on holiday in one of the countries that MiCars operates in. The unfortunate part is that one has to jump through hoops to find information about MiCars outside of the official website and documentation. So I’d call this one an “invest with caution” ICO that I’ll be watching, simply because I like the idea of making it easy to rent a vehicle.