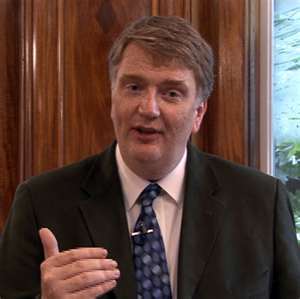 David Wilkinson is a theologian and currently the president of St. John’s College at Durham University. Recently I caught up with him for his viewpoints on space exploration and related issues.

Heidi: What’s your opinion of space exploration and is settlement desirable from your point of view?

David: I think it’s very desirable. I mean, I’m a great fan. Remember, I’m of the generation where one of my first memories is Neil Armstrong stepping onto the surface of the moon and therefore, I’ve always been inspired by that human curiosity. Not only just to find out about space, but also to experience a different type of living and different type of environment.

Now, I mean, I thought a little bit about it because a dear old friend of mine, one of my mentors in science, was Sir Robert Boyd, one of the founders of the British Space Program. He was an expert in remote sensing of the atmosphere and he argued very strongly that it was far too expensive and far too risky to send human beings into space. It was much easier, and he argued that most of the science that we wanted to do could be done simply by satellites and robots.

But I think there’s something about experiencing as a human being, something very different. I think for me, as I watched the Apollo landings, even as a six-year-old child, my imagination was gripped, my world view was expanded, and indeed, I think there is some science that only human beings actually will be able to do. Therefore, to have bases either on the moon or on Mars, maybe even on the moons of Jupiter or Saturn, I think is desirable.

Now, of course in all of this, there’s always the financial question: Who pays and is it worth it? I think that’s always a balance for big science against some of the humanitarian needs that we have in the world. But for me, big science is worth investing in because it’s not only good science, but it gives us the next generation of scientists.

Heidi: Awesome. What do you think people can and should do to prepare themselves for a universe in which interested groups are attempting to colonize other planets like Mars?

David: Sure. That’s a very good question and I think there’s a number of things. The first is that we need a whole generation of people committed to the science of how this is going to be worked. I think we’re just seeing some of the early stages of this in terms of thinking of, for instance, how you land a rocket on the surface of Mars, how you establish a colony, and of course, it’s not just physics here, it’s psychology, it’s how a group would work together, how you understand isolation or delay in communication.

I think there’s a lot of science still to do.

David: There’s some fundraising to do. I don’t think this will ever be fully covered by public money. I think some of it will have to come from the private sector and so I think how we talk about the benefits of this for humanity or for what minerals we might be able to mine or what new science we might be able to do is important for us to do.

Then I think there’s some work to be done in terms of ethics and justice. There’s questions about what right we have to take over people’s planets, particularly with terraforming, that is we’re transforming the environment.

When I say people’s planets, I mean, it might be that there are microbes on the surface of Mars or deep down in the permafrost. What’s the ethical question? The justice question about taking over a planet?

Heidi: What do you think people should do if they want to participate but worry that they might not be taken seriously by other future colonists who believe differently or might not accept them for some reason?

David: Well, I think science is one of those wonderful things that actually lots of people can get involved in. Of course, you do have to have a degree of mathematics to think about these things at the highest level.

One of the things about education is the wonderful way that we can use the resources of the web or the resources of scientists that we know to take an interest in these things, to understand a little more about what’s involved.

Heidi: Awesome. How would you answer some claims that when certain groups of people should be barred from space colonization or have only a limited beliefs because some people believe that their beliefs might be harmful?

David: Well, I’ve not thought very much about that, I have to say. I mean, it’s interesting, I speak as a Christian. As a Christian theologian, I don’t find in any way the possibility of space travel or indeed of discovery of life elsewhere in the universe as harmful to my beliefs as a Christian. To me, they’d simply be expanding my understanding and of the nature of God and the greatness of his creation.

I think one would always have to ask practical important questions about some of the types of people that you might want to send into very difficult environments.

For example, it would be an important part of the selection process in the early days of astronauts to have people who are psychologically robust, for example, to face the psychological challenges of isolation from the earth and community. You’d have to have people who worked well within a community. You’re going to be in a very small space with lots of other people for quite a long time. That’s going to be important as well.

But I don’t think we should bar people on the grounds of our own prejudice. I think often people will say, “Oh, you religious people, you won’t be able to cope with this type of thing.” I don’t think that’s the case. In fact, what’s interesting is that in the history of speculation about other worlds, it’s often been Christian theologians in the past who are at the forefront of thinking about these things. Often, we have our own prejudices and we shouldn’t impose those upon who goes.

I think diversity is the key to what it means to be human and therefore, I think in future colonies, diversity is going to be key to their health and fruitfulness.

Heidi: That’s all the questions I’ve got. Anything you’d like to add?