I would say it’s becoming fairly widespread that various organizations are becoming increasingly serious about colonizing Mars. This is becoming so well-known, in fact, that the People for the Ethical Treatment of Animals (PETA) recently sought to attract attention by saying that Martian colonists should be vegans. For some reason, I thought that was pretty funny. By this point, we Aspiring Martians have gotten pretty used to the idea that Martian colonists are probably going to be vegetarian at first. However, a lot of us don’t have much patience for people who try to tell us what we can or can’t eat when our lives are going to be regimented enough just from the daily work needed to survive on Mars already.

Very few of us are against someone coming up with a viable alternative to meat that comes from animals. Some have suggested that we could get our meat from vats where it doesn’t grow into the full organism. Just a steak maybe. Eventually, we might even use the same technology that is being developed to grow or “print” full organs for implants. We might have some fish in a tank or some rabbits that we can feed the waste plant products from our greenhouses to. While it might be unfeasible to have large farm animals on Mars for quite a long time, that doesn’t mean that people who settle on Mars will automatically be giving up meat altogether for the rest of their lives.

Really, just because we take rabbits doesn’t necessarily mean we’re going to keep them cooped up in too-small cages for the rest of their lives. Eventually, when we’re established, I could see having one module as a kind of open-space run for rabbits with us tossing foliage from harvested crops to them. We won’t even let the population get out of control. Once a week, we’ll probably select one or two rabbits to eat and we likely aren’t going to be skinning them alive for their fur first. (It’s called hemp, people.) Seriously, folks, rabbits are actually quite easy to take care of. At the worst, we might get sentimentally attached to an individual rabbit and turn it into a pet.

I’m delighted that PETA spoke up, really I am. It’s a sign that we’re getting noticed by people who maybe haven’t thought much about spaceflight lately. Really, the PETA crowd has to know that not everybody who dreams about going to Mars is going to agree with them. Maybe they decided to ride our coattails in the hopes of getting some free publicity. I would be more impressed if they offered to donate some non-GMO, heirloom seeds to take with us or, better yet, ponied up the cash for a couple of extra greenhouse facilities so that we can grow replacements for the nutrients that meat provides. When it comes down to it, I enjoy the occasional grilled steak, but I like grilled mushrooms just as much. However, I consider what PETA said to have about as much import as somebody who suggests that we land near that “face” on Mars so we can see if it’s really the product of whatever civilization ever theoretically existed on the Red Planet. They mean well and, in real terms, we can give them the illusion of getting what they want until we have the capacity to decide whether we want to continue being vegetarian, find a way to 3D-print or otherwise manufacture faux-meat products, or bring in animals to raise as food. Until then, I say that PETA can go eat a steak.

The FBI’s Take on PETA 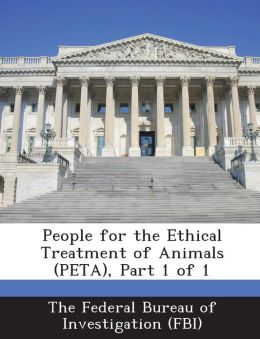