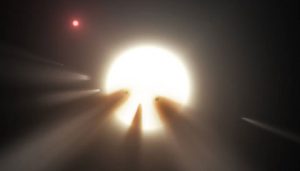 Tabby’s Star shows an unusual dimming pattern that can’t be explained by the presence of an exoplanet. What is it, then? Image credit Sky And Telescope

Scientists detect most exoplanets by detecting the slight dips in their host stars’ light when the planet passes in front of the star as seen from Earth. Most known exoplanets are so close to their host star and orbit so quickly that their transit lasts only a few hours or days. Scientists can confirm these superhot, superfast exoplanets faster because they can pick up the multiple transits of a genuine planet in a relatively short amount of time.

Most of the difficulty of detecting exoplanets comes from the very slight dip in light that a planetary transit causes in stars that might be thousands of light-years away. It takes a very sensitive instrument like the Kepler telescope to pick one up. So you can imagine astronomers’ surprise when they noticed that a star formally known as KIC 8462852, and informally dubbed Tabby’s Star, could dim for up to 20% for as long as 80 days and did that at irregular intervals. This is not something that would be caused by an exoplanet transiting its star.

Of course, astronomers got curious about what might be causing this. They even searched through the archives at the Digital Access to a Sky Century at Harvard (DASCH) to see what past observations that included Tabby’s Star could tell them. It turns out that KIC 8462852 has dimmed by 0.165 magnitude between 1890 and 1989. This is unusual behavior for an F-type main sequence star and not an error caused by degrading data, as other stars in the same area of the sky have shown very little change in magnitude over the same period of time.

This has caused some controversy, the least dramatic of which is a rebuttal that independent scientist Michael Hippke published on Arxiv.org, raising the possibility of systemic errors in the data. Speculation that the star could be surrounded by a debris disk most commonly seen around young stars was summarily dismissed because Tabby’s Star isn’t exactly a newborn and scientific instruments haven’t detected any extra infrared radiation that would have been associated with it. The idea that the star could have pulled extra comets away from another star system was considered, as Berkeley SETI Center scientist Andrew Siemion told Popular Science, “a bit of a stretch.”

Could It Be A Dyson Sphere Under Construction? 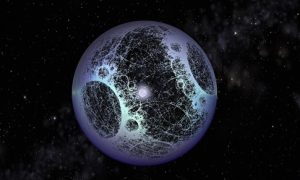 A variation on a Dyson sphere similar to this one could cause a star to dim but not entirely disappear. Image credit Outer Places

Science fiction fans may remember Dyson spheres from one Star Trek: The Next Generation episode in which the concept was used as the MacGuffin that made it possible for Scotty to visit the Enterprise-D. This fictional Dyson sphere was presented as a solid shell that completely encased its star. Theoretically, a Dyson sphere would be an earmark of a Kardashev Type II civilization that is capable of using all the energy of an entire solar system: Before you can use it, you have to be able to capture it and a Dyson sphere would be a way to capture the entire energy output of a star.

However, because a solar system may not include the amount of material that would be necessary to build a solid Dyson sphere, more reasonable alternatives might include a “Dyson ring” of the sort seen in Larry Niven’s Ringworld novels, a “Dyson bubble” consisting of a complex network of independent constructs that use solar sails to remain in place, and a “Dyson net” consisting of a network of interconnected cables and energy collection devices. These alternatives would allow enough light to escape for a distant civilization like the humans of Earth to detect it and wonder what might be causing these strange dips in the starlight when components of the Dyson device transiting its home star.

The gradual dimming over the course of a century could indicate that this theoretical Dyson sphere around Tabby’s Star is a work in progress. It would certainly be intriguing to watch a star gradually disappear as a new Type II civilization builds the structure necessary to capture their host star’s energy.

What Else Could Cause A Star To Dim That Much?

The unseen companion star may have used gravitational forces to boot a terrestrial “rocky” planet into Tabby’s Star. As the planet’s surface was vaporized in the process, it could have shed enough material to create a chaotic cloud that causes the dimming effect by absorbing light. A large and dense enough cloud of debris could cause the star to dim in an “irregular” way similar to the behavior displayed by Tabby’s Star.

In fact, scientists such as Columbia university astrophysicist Brian Metzger believe that similar dimming effects caused by stars swallowing planets that have been kicked out of their orbits by a game of gravitational billiards might not be as unusual as initially believed. Kepler has only looked at about 100,000 stars in its search for exoplanets and Tabby’s Star is merely the first in which this apparently excessive dimming effect was observed. If the capacity to watch for exoplanets using the “dimming caused by planetary transits” method were boosted by the launch of 10 or 20 telescopes with capacities similar to Kepler, scientists could have spotted this effect in many more stars by now.

“You would have to believe that there are a million other alien civilizations assembling Dyson spheres right now,” Metzger said of the Type II Civilization theory.

When Can We Tell For Sure?

One of the biggest problems of telling what might be causing KIC 8462852’s strange dimming pattern is that Tabby’s Star is 1,480 light-years away and we don’t have any spacecraft technology that is capable of traversing that distance in a reasonable amount of time yet. So it’s not like we can simply travel there and ask any theoretical Type II civilization how the deuce they were capable of building a variant on a Dyson sphere that is capable of blocking up to 20% of its light. At most, we could send an easily decoded radio signal toward Tabby’s Star and then wait 2960 years for a reply if there’s a civilization that’s capable of receiving and responding to our signal at all. Essentially, we’re stuck with cooling our heels on Earth and speculating about what it could be until we can get our rears in gear and develop meaningful interstellar travel.

Alternatively, some theoretical spacecraft could get the job done, although it could take centuries or millennia to get anywhere. One proposal could accelerate small spacecraft using a solar sail the size of Texas to a significant percentage of the speed of light though, naturally, some experts were skeptical. Organizations like 100 Year Starship push for developing the capacity to send humans on interstellar journeys within the next 100 years. So it’s possible that our descendants might develop the capacity to have face-to-face conversations with extraterrestrial civilizations like the one that could be building the theoretical Dyson sphere around Tabby’s Star.

So, right now, we’re stuck with speculation about what could be causing Tabby’s Star to dim by 20% on an irregular basis. Could it be natural or artificial? Could aliens really be in the process of building a Dyson sphere, or is this just so much dust and gas? It may be impossible to tell without actually going there for sure, but it sure is fun to speculate if one goes by the reaction of science writers everywhere.

Some Good Stuff To Read