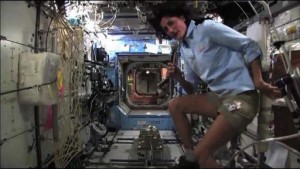 Sunita Williams demonstrates how to use the bicycle on the International Space Station. Image credit: Yahoo

So you want to participate in a triathlon but that’s a little hard to do when you’re orbiting at an altitude of 370 kilometers. It’s not like the International Space Station has a swimming pool and your favorite athletic activities become a little challenging when you and everything around you are weightless. What should you do? Well, you can just do what Sunita Williams (pictured here) did and get a little creative. On September 16, 2012, she participated in the Nautica Malibu Triathlon while serving on the International Space Station by running on the treadmill, bicycling on the stationary bike and doing a series of bench presses that were the equivalent of swimming half a mile. By doing so, she became the first astronaut to actually compete in a triathlon during a mission. She finished with a time of one hour, 48 minutes and 33 seconds. Of course, other astronauts have had fun with sports and athletic activities during missions. Take a look for yourself and see how astronauts can enjoy some out-of-this-world fun and games.

Sunita Williams Talks About Her Triathlon

WCIA Radio and CNN interview Sunita Williams about her triathlon and she discusses what it’s like to train in space.

Alan Shepard hits a golf ball on the moon at the end of the second moonwalk. Later estimates show that the last ball actually went about 500 yards.

Some Skylab astronauts have some fun with zero-g acrobatics and demonstrate Newtonian physics.

Those Japanese astronauts love baseball as much as Americans do. Here’s Expedition 28/29’s Satoshi Furukawa playing a one-man game of baseball on the International Space Station. “Where no man has gone before?” More like where no baseball has gone before.

So, What Do It Take To Play Sports In Space?

A good question. Things don’t quite behave in orbit the way they do on Earth’s surface. They are strongly influenced by Newton’s Three Laws of Physics. These laws include:

So basically, playing sports in space is a matter of retraining yourself to account for these three laws. That means pushing rather than throwing any object in the direction you want it to go and learning how to think in three dimensions. It can be done, and maybe you or your children will be the first to play competitive sports on a microgravity athletic field.

Because the International Space Station crew members aren’t fighting the gravity on Earth’s surface, their muscles can atrophy in a dangerous way if they don’t exercise frequently. That means providing some specialized exercise equipment. In this video, Dr. Lori Ploutz-Snyder is interviewed about the “SPRINT” exercise program for the ISS crew.