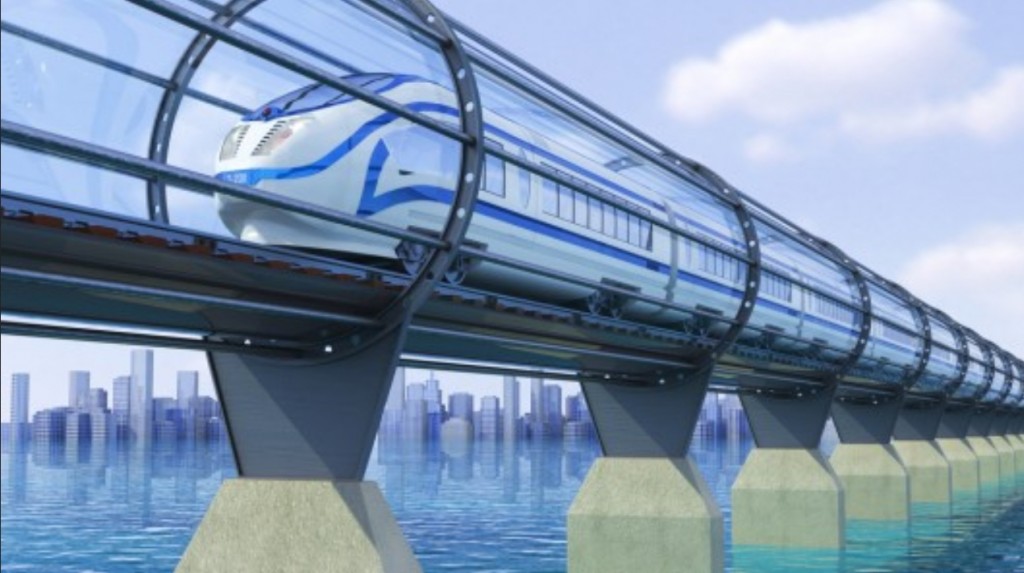 Anybody remember when Elon Musk proposed the Hyperloop as a nice idea that anybody could pick up the ball on if they were less busy than him? It’s moving a little closer to reality with a new deal that Hyperloop Transportation Technologies has just pinned down with Oerlikon Leybold Vacuum, a company that is best known for its work on projects like the Large Hadron Collider at CERN, and Aecom, a global design engineering firm whose role will be to build the planned prototype. Oelikon and Aecom join engineers from NASA, Boeing and SpaceX who are already volunteering their spare time to the project in exchange for stock options.

“It’s a validation of the fact that our model works,” said Hyperloop Transportation Technologies CEO Dirk Ahlborn, possibly an indirect reference to critics who say the Hyperloop won’t ever get off the ground.

The Hyperloop was introduced in a white paper written by Elon Musk as a series of nearly airless tunnels that could be used to transport people at near-supersonic speeds. Construction on a prototype is set to begin next year in an area halfway between San Francisco and Los Angeles known as Quay Valley. For all the skepticism, experts like Carl Brockmeyer, Oerlikon’s head of business development, think it’s doable.

“I don’t think the construction hurdles are significant compared to other technologies that are already out there. From a technical point of view, it’s not a challenge. We are used to much higher and harsher applications,” he told Wired’s writers.

Given the conditions proposed for the Hyperloop that include a vacuum chamber that the transports would move through, hypersonic speed may not be as far-fetched as it sounds. Existing high-speed trains like Shanghai’s Maglev train can already reach speeds of nearly 300 miles per hour even though they have to deal with factors like air drag. Studies indicate that the energy needed to get air pressure in the tubes down to near-vacuum is lower than one might think at first. In fact, plans for the prototype include powering it with solar panels and wind turbines to be erected in Quay Valley.

Is The Criticism Warranted?

Brockmeyer isn’t giving away how much the Hyperloop prototype will cost even though many of the skeptics say it’ll be expensive. Even so, the companies involved are trading stock options for labor in an obvious attempt to keep upfront costs low. It’s a complicated engineering project, so of course it’s going to be expensive. Does that mean it’s not worth doing? Maybe in the sense that the national highway system was considered “not worth doing” until it became a matter of national defense. Now everybody uses it for transportation and we only complain about it when we hear that a poorly maintained bridge collapsed.

An idea that amounts to a supersonic public transportation system sure sounds convenient, but how much are you willing to pay for that convenience? There have been complaints that the Hyperloop will mostly benefit the rich and, in fact, Quay Valley is going to be developed as a planned community. However, the only real difference between paying extra for the convenience of faster transportation and paying extra to have prepackaged meals delivered to your door is one of scale – maybe a few cents extra for each prepackaged meal as opposed to a few dollars extra for a ticket on the faster transportation system. It’s paying somebody else to do the work so you can save some time (read: more jobs). Anyway, early adopters of any new technology are usually the ones who cover the costs of the initial development, so don’t be too surprised if the costs come down when they’ve ironed out the kinks with the prototype and the Hyperloop becomes more widely adopted as a means of public transportation.

There are pros in this idea, though.

It will be interesting to see the Hyperloop in action regardless of the criticism. The prototype is going to cover a five-mile track and, at its most effective, the full-fledged version could seriously compete with public transportation routes in cases where the starting point and the destination are several miles apart. Consider the fact that it currently takes about 40 minutes to drive from Chicago’s O’Hare Airport to Downtown Chicago. That’s a long way to go just to catch a Chicago Bears game. However, the Hyperloop could get you there in five minutes tops while helping you avoid the risk of being involved in a car crash.

Could it compete with Amtrak? Possibly, though the distances that Amtrak routinely covers could be a challenge for a system designed to operate with vacuum tubes. That’s something that the engineers will have to figure out if they want to compete with services that provide transportation between cities.

This is getting into the territory that author and entrepreneur Seth Godin called “The Purple Cow” – the thing that makes you different from everything that might be kinda similar. The Hyperloop may end up being something that is seen as being sort of like Amtrak or the New York City subway system, but it’s a premium service that will get you to your destination faster and rarely be late by more than a few seconds regardless of the distance. Its “Purple Cow” is speed.

The Bottom Line For You

Even if you’re not a card-carrying member of the Elon Musk Fan Club, you might see that the Hyperloop is a lot like most of his projects: complex, kinda far-out science-fiction sounding, will take years to see real results, and capable of producing both high highs and low lows. However, keep your eyes peeled for the construction of the Hyperloop next year. If Hyperloop Transportation Technologies can pull this off, this could mean the next big thing in public transportation.