If you’re an employer, you probably know how difficult it is to find a truly good employee. You might have learned from the last time you hired a complete jerk that somebody who can present himself well in an interview is not necessarily going to be your best pick. Once they’re hired, they can be notoriously difficult to get rid of without lots of documentation, too. This is why Human Resources sometimes gets a bad reputation. Either HR departments just don’t like to admit that they’re capable of making a mistake, or they just hate all the paperwork that goes into getting rid of a bad employee.

It’s worse when race and gender become factors. Anytime you make a hiring decision, you’re risking a lawsuit when the obviously unqualified candidate with black skin was passed up for the qualified person with white skin. On the one hand, there are still employers who won’t hire a black man under any circumstances even though they won’t admit it. On the other, people forget that “equal opportunity” should strictly mean that race and gender won’t be factors if you’re willing to put the work in and become the candidate who is perfectly suited for the job. This becomes a case where a basic tenant of capitalism should ideally come in — namely, you want the best employees you can get for the money you spend on salaries and fringe benefits. And that’s going to fly out the window when accidents of birth become a major factor in hiring practices.

One thing that many Americans forget is that “The right to equal opportunity regardless of race or sex” is not the same thing as affirmative action. Equal opportunity only means that people have the right to be judged strictly on their ability to do the job regardless of factors that they have no control over. Affirmative action is all about filling an artificial quota of minorities in a way that drags down the idea that, in America, you can make it purely on merit. I know certain elements will probably howl about racism when they see this, but consider the fact that at least one Supreme Court judge who happens to be African-American went on record with a complaint that he had sometimes been perceived as less qualified than his peers on several occasions because he studied law at a university that uses affirmative action. Basically, it’s one thing to legitimately prove you’re just plain good and quite another to be perceived as the guy who coasted through because a school didn’t want to be perceived as racist.

We should eliminate three factors from the system, then. Obviously, all forms of bigotry need to go, as it holds down some highly qualified people — and, yes, it is possible to be a member of a minority and still be a bigot. Affirmative action should not even be a factor in recruiting. If you attract enough qualified minorities without it, you’re obviously running a good school or a business that is not unfriendly towards the idea of hiring minorities. And useless lawsuits from the prospective employees who were obviously not qualified need to go. There is such a thing as extortionist lawsuits. That kind of thing is why liability insurance exists and why HR departments are afraid to hire the absolute best candidates they can regardless of race or gender.

In fact, holding people back strictly because of race or gender could well strike the first few generations of future Martians as insane. It’s a world where everybody will have to actually do something useful for the colony regardless of who they are. The Darwin Awards will exist on steroids on Mars and very likely weed out the ones who never belonged in the first place even if their backers refused to. Even when travel between Earth and Mars becomes more routine and we start seeing the lazy bum who thought Mars would be easy, it’s likely that he will end up in Loser’s Row without the rest of us really having to do anything with him. When somebody else decides to plant another colony, I hope they land far enough away that they won’t give us problems over the fact that we’re the natives. (But don’t worry. By that time, we’ll all be so used to surviving in the harsh Martian landscape that we can take them just by being more clever than they are.) Eventually when their colony and ours get big enough to grow together like every “Twin Cities” arrangement you’ve ever seen, we might as well make it one city where everybody works together without worrying about who’s a native and who isn’t — though we will respect you more if you’ve already proven that you have what it takes to live on Mars.

Instead of whining that “Life is not fair,” we should instead be saying that nothing in life is free. Equal opportunity should mean exactly that. As many obstacles are removed as possible until there is nothing between you and the finish line except maybe some hurdles. You might win if you can run the race without creaming yourself on one of the hurdles, and, yes, it is possible to jump over them. It becomes your job to figure out how to do that and simply walking the entire course and then waggling your finger and saying, “I won!” will probably just annoy the real winners.

The main problem is that artificial obstacles get erected and becomes institutionalized. Suddenly there’s a wall you need to scale and no drop-down on the other side, so you’ll never reach the finish line. You judge people by their appearance whether you realize it or not. What’s up with that chick with pink hair, right? Maybe she’s just going through an adolescent phase where she thinks her funky hair color is cool. At least it’ll grow out when she gets sick of it. In some places, she would be judged a lot more harshly than that. These are the places where women risk all kinds of atrocities if they so much as set foot outside the home. It’s one of those situations where you almost want to reach into the Deep Space Nine files and unleash Quark’s “Moogie,” Ishka, on them so she can charm the socks of the leadership and help them realize what a powerful economic force women can be. As even Quark put it in his capitalist-centric attitude, “Earning money, and spending money!”

It’s why I admire the women in poor countries who can keep a fruit stand open and why equal opportunity can help bootstrap an economy that could use a boost. You’re boosting productivity when you bring in the people who aren’t afraid of hard work and are willing to do what it takes to succeed, regardless of race or gender.

Some Readings on Equal Opportunity 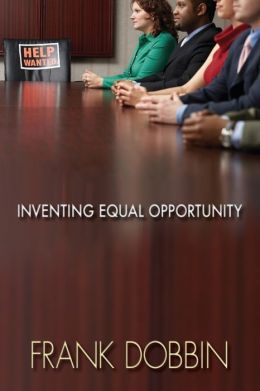 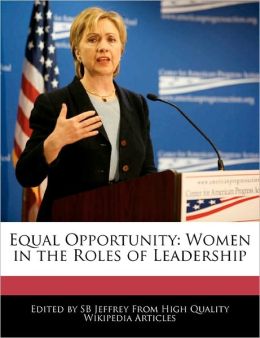