So here’s a tricky case for you. You’re serving on a jury and some black teenager is brought in, wearing the usual orange jumpsuit. He looks like an arrogant little punk. This is the third time he’s been caught snatching purses and he might have gotten off too lightly the first couple of times. Maybe he expects to get off lightly this time, too. The case doesn’t go too well for him. Who’s going to believe somebody who’s already been caught twice before? When he takes the witness stand in his own defense, he whines about racism. Little twerp, right? If you’re not one of those people who buys it when the punk knows he has it coming, you might as well do what his parents obviously failed to do and teach him that his choices have consequences.

Really, a truly fair justice system isn’t going to care about your race or where you came from. “Equal protection under the law” doesn’t mean you aren’t going to pay for it if you commit a crime. It does mean that you should ideally be judged by the facts presented in court. It would be convenient to have one of those black curtains hanging around the defendant’s box so nobody really seas what the defendant looks like because, even when you don’t think of yourself as racist, it’s easy to think that somebody looks like a lost cause. It won’t do much about to hide their accent or their lack of fluency in English except maybe by having a stand-in speaking for them. It’s about balancing the punk’s right to a fair trial and fair sentence (Remember, he’s already been convicted twice) against the white grandmother’s right to expect that he won’t be trying to steal her purse anymore. In fact, the right to fairness regardless of an accident of birth has been enshrined in the 14th Amendment to the U.S. Constitution, a rather long one which says in its first section:

Perhaps it would be easier to leave behind distinctions of race, creed, color and national origin. With Mars One, we will pretty much have to. Occasionally, one Aspiring Martian or another will get accused of trying to turn Mars One into a one-person show simply because she implied that she wants to turn it into a platform for people like her who get treated like second-class citizens. If you become an inspiration to others simply by being yourself, fine, but remember that your teammates are your equals and won’t be very impressed if you treat them like they’re just supporting cast members because they don’t share your agenda. Honestly, you might find yourself without a team real fast if you’re going to act like a jerk about it and you could be eliminated in an individual competition when the rest of us who are used to teamwork help one another and leave you behind. It’ll be more about the fact that you’ve annoyed the rest of us than about your race when we know that we’re all going to be Martians.

On the flip side, with about one thousand Round 2 candidates still in the running, there may still be a few who look good on paper but won’t be able to handle the diversified bunch that we are. Culture shock will be part of this. International travelers often run into trouble because they ignorantly violated some local custom or law. Flirting can take different forms in different parts of the world. The way I heard it, that might have been part of the problem with at least one international study involving a few people in a small habitat. Several people, including the crew members, may have forgotten that something that’s normal in one society might not be in another. We’re going to get the cultural differences. It’ll be a matter of recognizing and dealing with them as they come up. Eventually, we’ll just have one culture – a Martian one.

However, there will be the individuals who deliberately keep the blinders on and refuse to adapt to the fact that they’re going to be on an international crew no matter what they do. It’s like that one person on a jury who takes one look at the black kid and decides that there’s no way that little punk can be innocent even though the prosecution team never nailed down their case and proved that he was guilty. It ends up being a hung jury because of this one guy, basically wasting a week out of everybody’s lives. I certainly hope that our theoretical Aspiring Martian who maybe didn’t know what he was getting into and might not have been all that great to begin with doesn’t end up dragging down three very qualified people just because he can’t cope. Maybe that was the point behind the “What sort of person would you rather not work with” question on the original Mars One application: to weed out the obvious problems. When race becomes a factor in any kind of decision making on a Martian colony, you might as well give it up because anyone who can’t come up with a better argument than what amounts to a personal attack shouldn’t even be there. We call that “trolling” on the Internet. Keep in mind that we won’t be Irish, Egyptian, American and Russian anymore. We’ll be Martian and we should be able to leave behind the baggage by this point.

I might have mentioned that video evidence should count for a lot in a Martian colony in which video cameras are everywhere. Our two rascals, George and Fred who have feuded so much that we’ve all been tempted to confine them to opposite sides of the colony, have proven that the other one started it several times just by showing us the video. While they might not necessarily be twins, the idea that they might be different races simply should not matter when you can get a tamper-proof video camera. On a world where everybody is theoretically equal, you won’t get much respect if you try to play the race card, either. If the prosecution team actually comes out and calls the defendant a little black punk, they probably won’t score many points with any reasonable modern-American jury. That should go double if a Martian defendant is facing a crowd of his peers

Anyway, we all know that those crazy Earthers can’t seem to get their act together, but that shouldn’t mean that a fourth-generation Martian society should automatically peg the newcomer who just rode in from Earth the next time there’s a burglary because maybe he came to Mars to get away from all that and he was clumsily trying to flirt with a sexy skinsuit model when it happened. It could’ve been George again, so be sure to do a proper investigation before you call out the lynch mob.

It sure would seem easier to just avoid denoting certain classes of people, wouldn’t it? Unfortunately, that’s what happens when history is littered with about a bazillion religious sects that have all claimed to follow the “one true way” and more races than anybody except maybe some scholars and U.N. officials with time on their hands have ever bothered to count. Blending all that together into one human race might make “equal protection under the law” a whole lot easier, but that will mean leaving behind a lot of multi-generational baggage and that’s not an easy concept for so many billions of human beings who are used to squabbling over the one-tenth of a percent of us that is different. And of course some classes of humans wind up on the bottom of the heap where “equal protection” becomes a pipe dream when true justice should ideally just pay attention to the facts of a case rather than where somebody’s ancestors might have come from.

More About the 14th Amendment 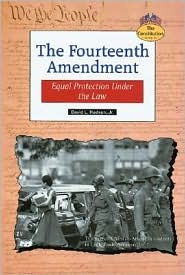 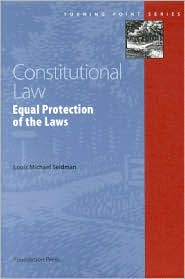