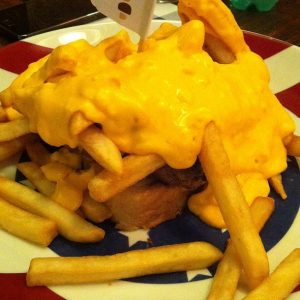 The “Horseshoe” is a dish that is apparently unique to Illinois and can be best described as an open-faced sandwich that starts with a piece of Texas toast. For maximum authenticity, the Texas toast is placed on a sizzling plate known as the “Anvil” and topped with ham cut in the general shape of a horseshoe. The ham is drenched with Welsh rarebit cheese made with white sharp cheddar. Just before serving, the horseshoe is topped with potato wedges sometimes called “nails”.

According to the most widely accepted origin story for the Horseshoe, a chef named Joe Schweska needed a new lunch item for the menu at the restaurant in Springfield’s Leland Hotel. His wife suggested that he create a sandwich using Welsh Rarebit sauce. He experimented with ingredients, including his own version of the sauce. The original Horseshoe was introduced in the 1920s and the story only survives because of recorded recollections from people who knew the family and had dined at the Leland Hotel. Variations on the story had the dishwasher at the Leland inventing the Horseshoe, but the reaction from his ailing widow decades later — “Oh, let it go” — seems to indicate that this is false.

More recent versions include hamburgers, pork tenderloin and fish filets in the place of the ham. Some restaurants even offer a “breakfast” version with eggs and hash browns. The cheese sauce is now usually added on top of the French fries and every chef has a unique recipe for the sauce. It’s hard to find an authentic version of the Horseshoe in restaurants outside of Illinois and it seems to be most popular around Springfield. If you describe it to the staff in any restaurant, though, they may find that they have all the ingredients on hand.

Free meal if you can eat this in under an hour at the Carlinville Plaza Cafe in Carlinville, Illinois!

Make Your Own Horseshoe 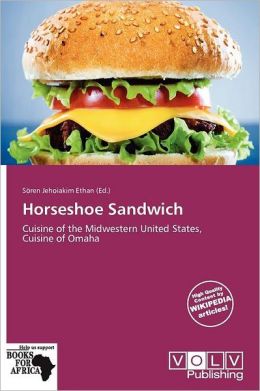