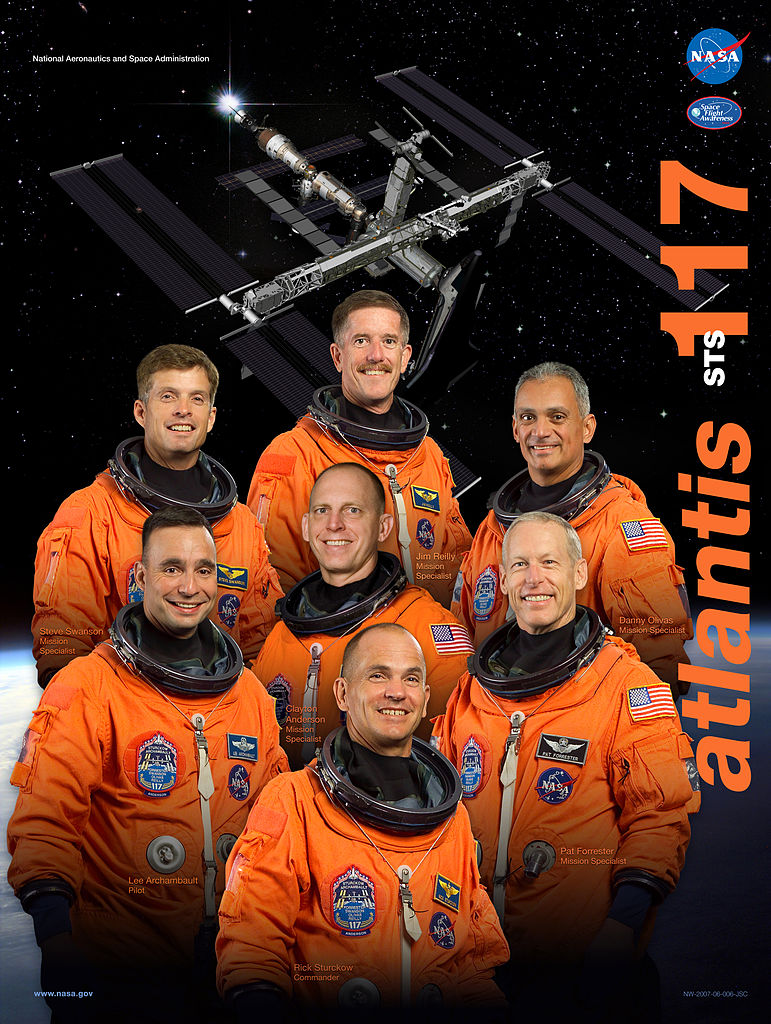 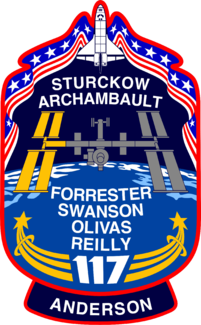 The launch of STS-117 was delayed due to weather, hailstone damage and a thorough check of the External Tank. This was expected to push back the schedule for future Space Shuttle launches but NASA was confident that they could get back on track by the end of the year. STS-117 Atlantis finally launched on June 8 with Expedition 15/16 crew member Clayton Anderson and the Starboard-3/4 Truss segment on board. The S-3/4 Truss contained a Solar Array Wing that would provide additional power for the space station in anticipation of delivery of more science modules over the next couple of years.

The crew included Shuttle Commander Rick Sturckow, Pilot Lee Archambault, and Mission Specialists Patrick Forrester, Steven Swanson, John Olivas and James Reilly. Sturckow had studied some of the work done by previous Shuttle crews who had delivered truss segments and was confident that they could learn from previous difficulties. The EVA astronauts of STS-115 had wrestled with a stubborn bolt and the Atlantis had a torque multiplier that would hopefully prevent similar problems. They also streamlined the procedure of using the Shuttle’s robotic arm to inspect the shuttle exterior for damage.

Once Atlantis reached orbit, the crew began preparations for orbital operations and rendezvous with the space station. Forrester and Swanson activated the Atlantis’ robotic arm (RMS) and noticed that part of the insulation blanket on the port OAMS pod had pulled away from the thermal tiles and folded back on itself. It could have been caused by airflow during launch, bad installation or impact damage. The Shuttle management team was confident that they would be able to solve the problem.

Archambault and Forrester used the RMS to lift the new truss segment out of the Atlantis’ payload bay and perform a handover to Canadarm2, operated by Sunita Williams. It was left in place over the crew’s sleep period to let it warm up in the sunlight. The two EVA astronauts, Reilly and Olivas, slept in the Quest airlock to purge nitrogen from their systems as part of preparations for the mission’s first spacewalk.

Atlantis’ point of view during STS-117’s docking with the International Space Station.

Archambault and Forrester began June 11 by using Canadarm2 to move the new truss segment to its permanent place at the end of the S-1 Truss segment. This change caused the Control Moment Gyroscopes controlling the space station’s attitude to overload and shut down. To compensate, Atlantis took over the job of attitude control and Archambault, Forrester and Kotov sent a command that closed the bolts holding the S-3/4 Truss segment in place.

Reilly and Olivas began their EVA by exiting through Quest and proceeded to the joint between the S-1 and S-3/4 Truss segments. They connected power cables, released the launch constraints on the S-3/4 Solar Array Wing blanket boxes and the radiator. They also opened the blanket boxes on the Solar Array Wing. They moved on to the Alpha Joint Interface Structure that rotated the Solar Array Wing to keep it in line with the sun and made its struts rigid. They also installed a Drive Lock Assembly and released the launch locks on SARJ. The EVA ended with a duration of 6 hours and 15 minutes.

Meanwhile, Williams and Anderson continued handover tasks. Controllers on the ground decided to extend the flight by two days and tentatively added a fourth spacewalk to the schedule to deal with the thermal blanket issue. Engineers and astronauts on the ground were studying the problem and possible solutions. Even if the separated blanket didn’t cause the loss of another shuttle, it would certainly cause major damage that could play havoc with the launch schedule

Houston began the task of deploying the new SAWs in stages while the two crews slept. When they woke on June 12th, Sturckow, Archambault, Forrester, Swanson, Olivas, Reilly and Williams took over the task of deploying the new solar arrays in stages and observing the process from different angles. By 14:00, both SAWs were successfully extended. With the SAWs now capable of producing power for future laboratory modules, control of the station’s attitude was transferred from Atlantis back to the station. Six computers in Zvezda crashed at the same time, including ones responsible for assisting the Control Moment Gyroscopes in major attitude corrections. Until the problem was solved, controllers decided to have the Atlantis use its thrusters to compensate.

Ever wonder what would have happened if there was any kind of chance that astronauts in trouble could be rescued? The Space Shuttle Rescue Team would have sprung into action. 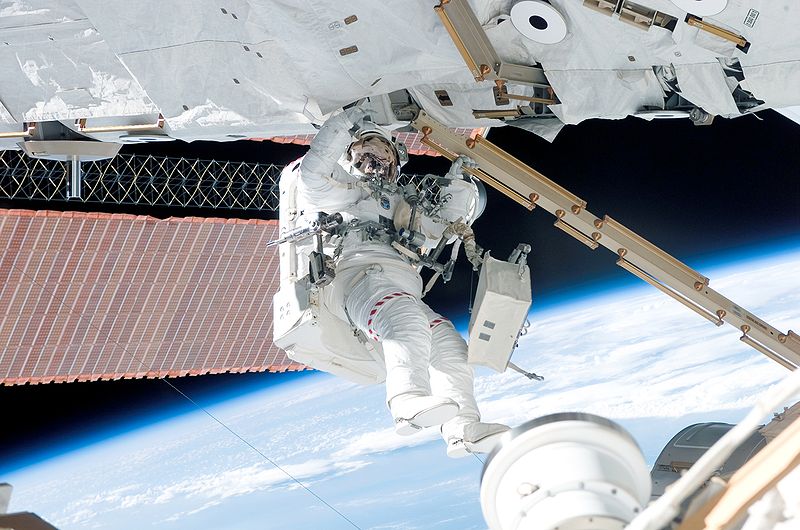 Pat Forrester and Steve Swanson exited through Quest and began the second EVA of STS-117 at 14:03 on June 13. Forrester rode the Atlantis’s robotic arm out to the P-6 ITS while Swanson made his own way out to the same location. Inside the station, Lee Archambault and Jim Reilly sent commands to the P-6 SAW to retract it in stages while the two EVA astronauts monitored the progress and prodded another five and a half bays into place. Then, Forrester and Swanson proceeded to the P3/P4 Truss segment and removed the launch locks holding the Solar Alpha Rotary Joint (SARJ) in place. Tests revealed that the SARJ motor control circuits had been wired in reverse, so one launch lock was left in place to prevent the SARJ from rotating incorrectly. Forrester and Swanson returned to Quest with an EVA duration of 7 hours and 16 minutes.

Meanwhile, engineers on the ground continued troubleshooting on the failed computers. They were disconnected from the U.S. power supply in case the circuitry was producing electronic noise that interfered with their function. Four of the six computers were finally reactivated after Fyodor Yurchikhin and Oleg Kotov installed a jumper cable to bypass a secondary power switch. The remaining two computers were booted up after some rewiring to bypass the faulty power supply.

Preparations for the Third EVA

Jim Reilly and Danny Olivas began the third EVA on June 16 and collected their tools. Olivas rode the shuttle’s RMS to the errant thermal blanket on Atlantis, unfolded it and stapled it back into place. He finished by driving a metal pin through the blanket and into adjacent thermal tiles to hold it in place. Meanwhile, Reilly installed a hydrogen vent that would be used for the American oxygen generation system to the International Space Station’s exterior.

Early the next morning, Sunita Williams set a new womens’ space flight duration record. She said of it, “I feel like a lot of this was just sort of being in the right place at the right time.” She enjoyed her time on the space station but was looking forward to a chance to walk on the beach.

Meanwhile, Anderson was adjusting to life on the station. During a press conference, he commented, “I hope I can carry on and do half as well as she did.” He credited Sunita Williams for providing experienced assistance during their handover period.

Forrester and Swanson began the fourth and final EVA of STS-117 on June 17, 2007, exiting through Quest. Engineers had found a workaround for the reversed wiring problem, so the two EVA astronauts performed a visual inspection and removed the remaining restraints to permit free rotation. They also stowed a keel pin that had been used to hold the P3/P4 truss segment in place during launch and installed a safety stop on the end of the Mobile Transporter used by Canadarm2 to move along the truss. The two spacewalkers installed a node LAN cable that would permit hardware in the Russian modules to be controlled from the American side of the station and opened the hydrogen valve for the American oxygen generation system. An attempt to bolt down the micrometeoroid shield installed on a previous spacewalk failed, so Forrester and Swanson tethered it in place. With all the tasks completed, Forrester and Swanson returned to Quest with an EVA duration of 7 hours and 58 minutes.

The last full day of joint operations was an easy one while the combined crews made final equipment transfers. With the station computers back to normal, attitude control was transferred from Atlantis back to the station. Testing revealed no lingering anomalies with the computers.

The hatches were closed on June 18, 2007, with Sunita Williams on board. She played a recording of James Blunt’s “Goodbye My Lover” in commemoration of her time on the station, and then the Bee Gees’ “Stayin’ Alive” for Clayton Anderson. The Atlantis undocked on June 19. After a day’s delay due to weather, the STS-117 crew landed on June 22. 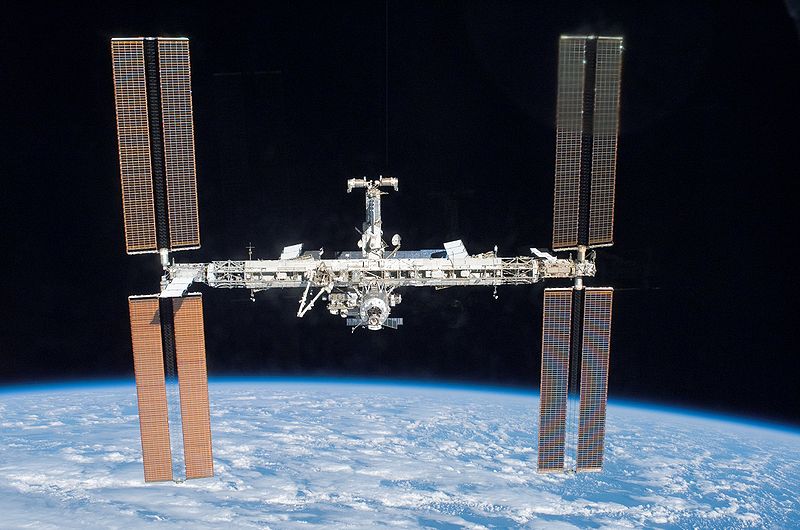