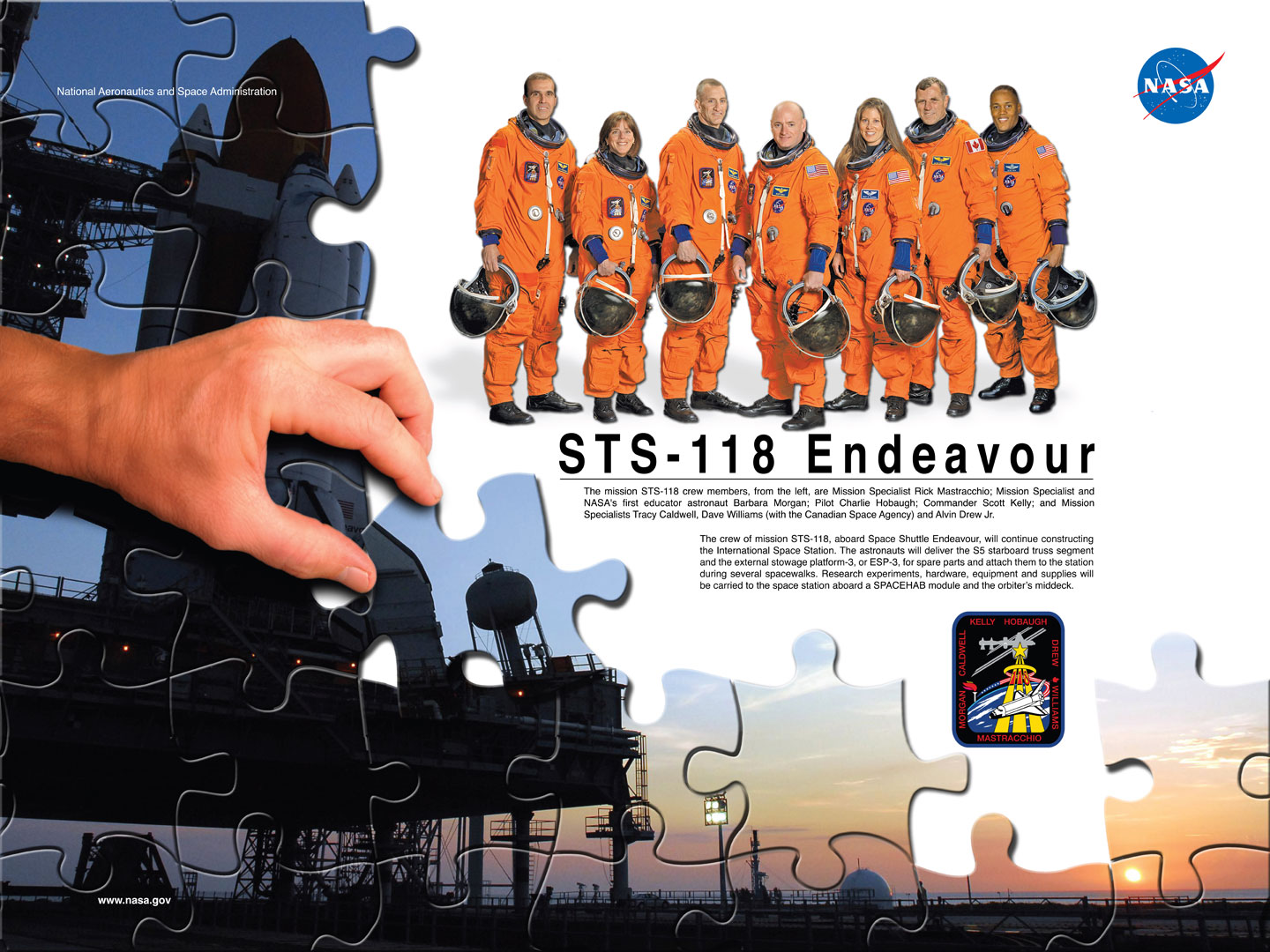 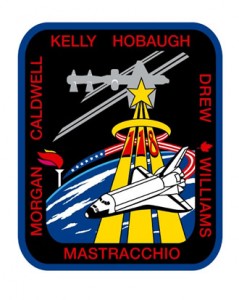 The Endeavour launched on its first mission in four and a half years on August 8, 2007. It had been heavily upgraded during the hiatus to allow for longer missions and now included the Station-to-Shuttle Power Transfer System (SSPTS), which would allow it to draw power from the station.

The crew included Shuttle Commander Scott Kelly, Pilot Charles Hobaugh, and Mission Specialists Tracy Caldwell, Rick Mastracchio, Benjamin Drew Dafydd Williams from Canada, and Barbara Morgan. Barbara Morgan had been part of Ronald Reagan’s “Teacher in Space” Program as Christa McCauliffe’s backup when the Space Shuttle Challenger disintegrated only a few seconds into the STS-51L mission. She was very well aware of the risks, but decided to apply as a professional astronaut anyway and was accepted in 1998. Because she had been McCauliffe’s “Teacher in Space” backup and she would be flying on Challenger’s replacement shuttle, she got a lot of media attention.

Though known as an “Educator Astronaut” and there was certainly plenty of educational and public affairs events planned for the flight, her “Educator” duties took a back seat to her duties as a Mission Specialist. Those duties included using the Endeavour’s RMS to capture photographs of the installation of the S5 Truss Segment. The crew had nicknamed it “Stubby” because it was basically a comparatively short place-holder that provided room for the S6 SAWs to operate, with electrical and plumbing lines added to let it function smoothly with the space station.

The Endeavour also featured the last visit of SpaceHab to the station. SpaceHab was a logistics module that had seen use since STS-76 in 1996 and was still useful when the Shuttle didn’t have room for one of the Multi-Purpose Logistics Modules.

Ninety minutes after launch, Endeavour had a close encounter with a piece of space junk, part of an old Delta rocket that had been launched during the 1970s and passed within 2.4 kilometers of the Shuttle. Other than that near miss, Day 1 was relatively peaceful. During Day 2, the four Mission Specialists took turns using the RMS to retrieve the Orbiter Boom Sensor Array and inspect areas that had been hit with foam for damage. They also prepped for rendezvous. Morgan told a television audience, “We’ve been working really hard, but it’s a really good fun kind of work.”

On August 10, Endeavour rendezvoused with the International Space Station and performed the R-bar pitch maneuver so the Expedition 15 crew could take pictures to be reviewed for damage. Engineers on the ground discovered a square hole on the underside of Endeavour’s starboard wing.

Handoff Between RMS and SSRMS

The Endeavour robotic arm hands the S5 Truss to Canadarm2.

After the hatch opening and initial safety briefings, the Endeavour crew activated the SSPTS for the first time. This allowed the Shuttle’s fuel cells to cool more than usual, setting off an alarm several hours later. The alarm was adjusted to allow for the cooler temperatures. In the meantime, Mastracchio used the RMS to lift the S5 Truss segment out of the payload bay and hand it over to Canadarm2, operated by Hobaugh and Anderson. The combined crews began unloading SpaceHab.

The S5 truss segment had been left on Canadarm2 overnight to let it adapt to the space environment.. Mastracchio and Benjamin Williams began their first EVA on August 11 and got into position on the S4 Truss segment. With the two EVA astronauts providing visual cues, Hobaugh maneuvered Canadarm2 to place S5 in its final location on the space station. Once it was in position, Williams and Mastracchio bolted it in place and connected electrical and plumbing lines between S4 and S5. They proceeded to the P6 Truss segment and retracted its forward radiator in preparation for moving P6 to its final location on a future Shuttle mission. The EVA ended with a duration of 6 hours and 17 minutes.

On August 12, Hobaugh and Anderson used the OBSS to get a closer look at the areas on the Space Shuttle that had been struck with foam. If the damage posed a danger to Endeavour, the astronauts would probably have to make an extra EVA to repair it. Mission managers didn’t think the gouge on the underside of Endeavour’s wing would cause Endeavour to break apart the way Columbia had during the last few minutes of STS-107, but cautiously continued to explore options. Most of the day was used to transfer cargo from SpaceHab to the International Space Station with an extra EVA to install a berth for the OBSS.

Mastracchio and Williams began their second EVA on August 13, exiting through Quest. Hobaugh and Anderson used the Canadarm2 controls to transfer them to the Z1 Truss. The two EVA astronauts removed a malfunctioning CMG and replaced it with a new one brought up by the Endeavour. The failed CMG was stowed on External Stowage Platform 2 to be brought back to Earth on a later Shuttle mission. The two astronauts returned to Quest with an EVA duration of 6 hours and 28 minutes.

August 14 marked the Zarya module’s 50,000th orbit. Caldwell and Morgan used Endeavour’s robotic arm to lift External Stowage Platform 3 from the payload bay and hand it off to Canadarm2. The new platform contained another CMG that could be used as backup, a nitrogen tank assembly and a battery charger/discharger unit. The External Stowage Platform was attached to the P3 Truss segment. The day also featured interviews and live events. 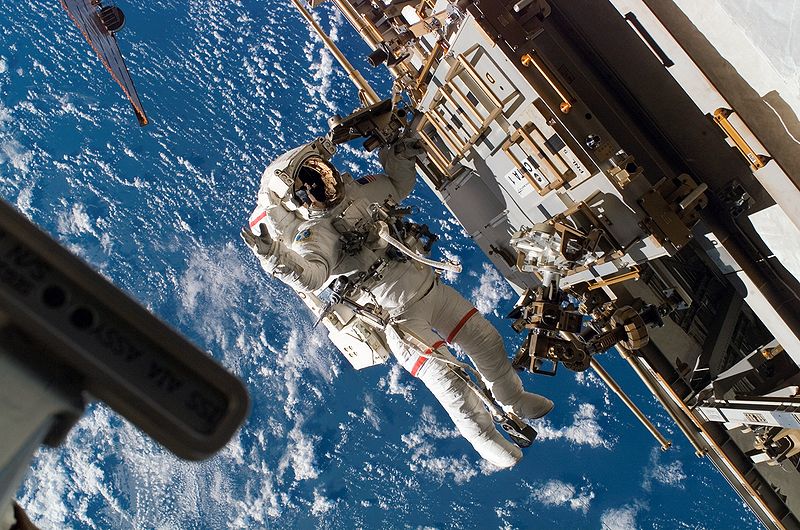 On August 15, Mastracchio and Anderson again exited through Quest. They moved an S-band Antenna Sub-Assembly from the P6 truss segment to P1 and installed a transponder on P1. Inside the space station, Hobaugh and Kotov used Canadarm2 to relocate two CETA carts from from the port side of the Mobile Base Station to the starboard side to make way for the transfer of the P6 Truss to its permanent location.

The gloves on EVA suits used on previous shuttle missions to the station had developed small tears while in use, so both men now had to periodically check for damage to their gloves. Mastracchio developed one on his left thumb. It hadn’t been punctured deeply enough to pose a threat, but Mastracchio had to return to the airlock anyway. Anderson finished his work before returning to Quest himself. The recovery of the MISSE-3 and MISSE-4 packages, two material exposure experiments, were rescheduled and the EVA ended with a duration of 5 hours and 28 minutes.

On August 16, Barbara Morgan talked to some of the children at the Challenger Center for Space Science Education in Virginia. The widow of STS-51L Mission Commander Richard Scobee helped manage the session at the Space Center. When asked if she had any special teachers in her life, Morgan answered that the crew of Challenger’s last flight had been mentors. “They were my teachers and I believe they are teaching us today, still.” She showed the students the STS-51L patch that she had brought on Endeavour.

Most of the remaining day was spent on equipment transfers. The Mission Management Team sent word through Houston controllers that they had decided against an EVA to repair the damaged section of Endeavour’s wing.

August 17 was spent preparing for the next day’s EVA and making equipment transfers. On the ground, Hurricane Dean was approaching Houston, causing concern that the control center would be threatened. Because of this, the EVA was shortened by two hours and Endeavour was to return home a day earlier than planned. As a last resort, Mission Control could be transferred to a facility in Florida.

On August 18, Williams and Expedition 15 crew member Clayton Anderson began the fourth EVA of the STS-118 mission, meant to take care of some “get-ahead” tasks. They installed an antenna for the External Wireless Instrumentation System, meant to measure stress on the ISS structure, and a stand for the OBSS. They also retrieved the two material exposure experiments that were left behind when the third EVA ended early. During the EVA, the two astronauts got a view of the hurricane that was causing so much trouble in Houston. The EVA ended with a duration of 5 hours and 2 minutes.

Later that day, the two crews said their goodbyes and closed the hatches for the final time. The Endeavour undocked the next day and landed at the Kennedy Space Center on August 21. Hurricane Dean was downgraded from a Category 5 hurricane to a Category 1 tropical storm before it ever hit the American mainland. 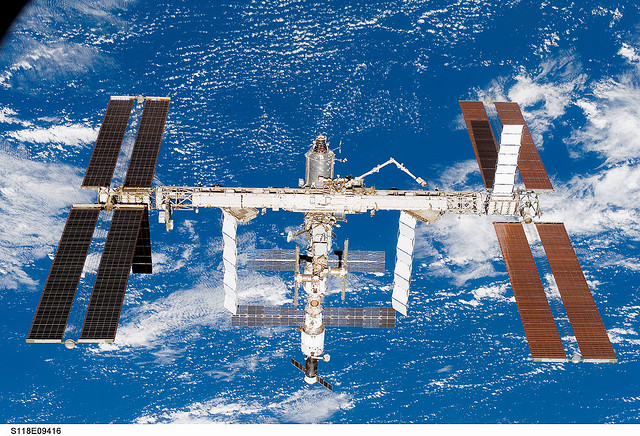