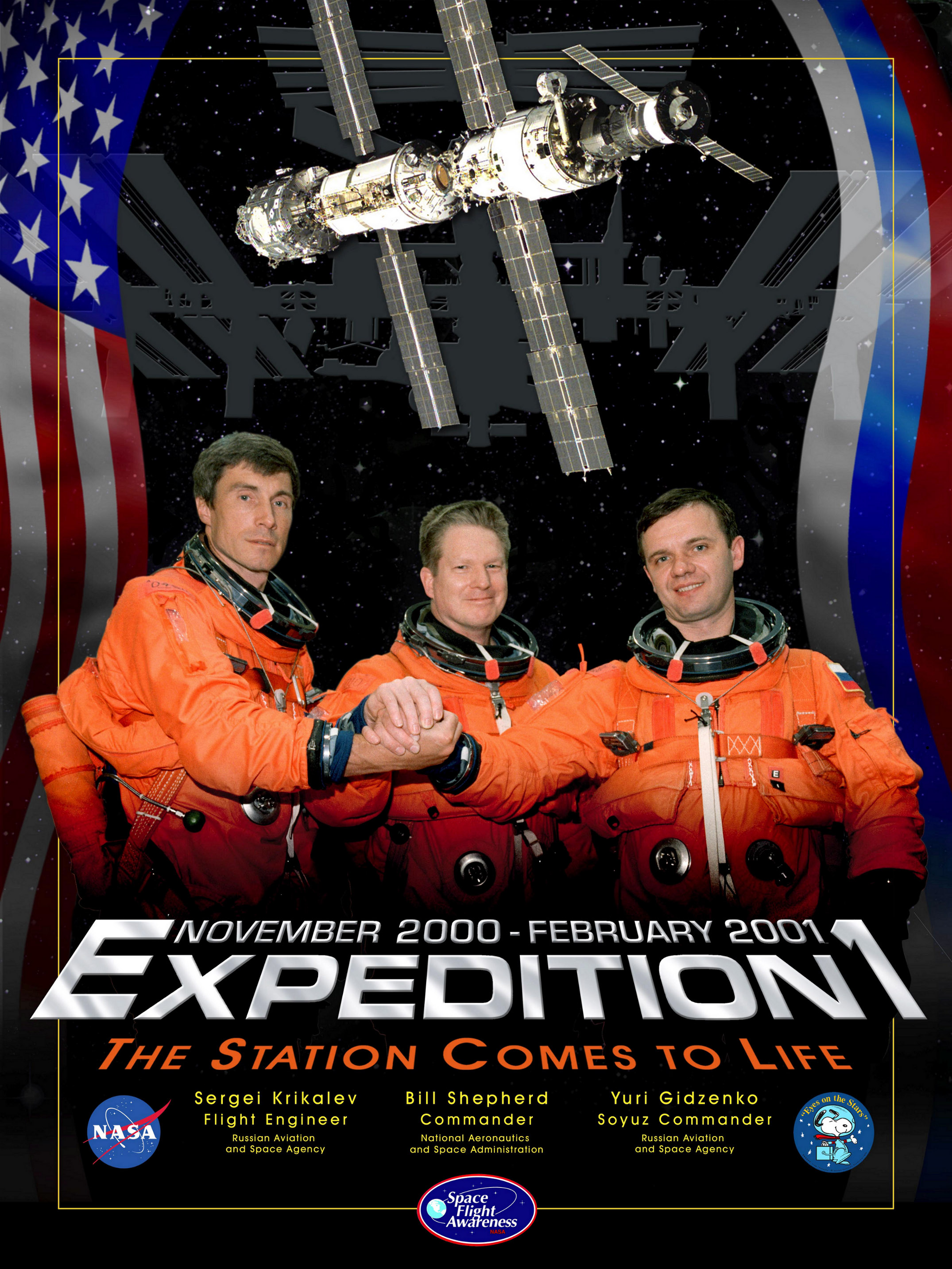 While maintaining the SAFER units used to supply emergency oxygen during EVAs, a NASA contractor discovered a dangerous oil slick in the units. The SAFER units were modified to fix the problems in time for STS-106 but it was proof of how vulnerable the space shuttle was to seemingly minor oversights. Russia was also making noise about needing more funding for its hardware. It looked to America for more money, something which Goldin and Congress were reluctant to provide beyond the $14 million that NASA had already provided for Russian subcontractors. The lack of funding on the Russian side caused delays and threats of work stoppages from Russian companies involved in constructing the hardware. When a cosmonaut was summarily yanked from the crew of STS-92, some speculated that the Russians’ apparent lack of commitment to the International Space Station was a factor. A restructuring of the schedule meant that the completion of the Baseline Configuration wouldn’t be completed until 2006. 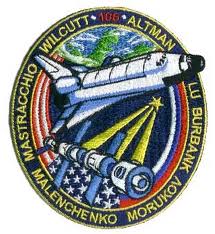 In the meantime, STS-106 flew as planned. The Space Shuttle Atlantis carried 2,723 kilograms of cargo including three new batteries, power cables, fiber-optic lines and power converters to help the American-standard electric systems on Unity work more smoothly with Russian-standard electric systems on Zarya and Zvezda. They also installed a new treadmill with a vibration-dampening mechanism. STS-106 also boosted the International Space Station to an orbit with a 388-kilometer apogee and 375-kilometer perigee. Atlantis left behind a Protein Crystal Growth experiment to be retrieved by STS-92. 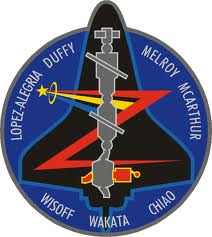 STS-92 delivered the Z-1 Truss, the first permanent lattice structure for the space station. It included components that would support large solar arrays, provide distribution of power, data and coolant throughout the completed space station, and control the space station’s attitude. The Discovery’s Ku-Band antenna failed, reducing communications and video feeds to Mission Control, and an electrical short circuit disabled mechanisms that allowed the shuttle computers to communicate with space station computers. The crew made repairs but the delays put them two hours behind schedule. They unloaded the truss and connected it to a CBM on Unity. A work platform was also installed and Mission Specialist William McArthur got the first chance to use it during an EVA. It was his first spacewalk and he was just a little nervous about working without a reassuring view of Discovery: “My toes are curling right up.” His toes curling up were a real reaction to being weightless. He connected six external cables between Z-1 and Unity, and then Mission Specialist Leroy Chaio took his place to maneuver an S-Band Antenna Subassembly from its launch position to a temporary mount for the next crew to deploy and activate. A few days later, they performed the first cleaning job on the ISS, collecting bacterial samples and wiping down surfaces with a fungicide. They retrieved the Protein Crystal Growth experiment, the first to take place on the International Space Station. After a two-day delay due to bad weather and winds at the Cape and Edwards Air Force Base and a total mission duration of almost 13 days, the Discovery touched down on a dry lake bed. 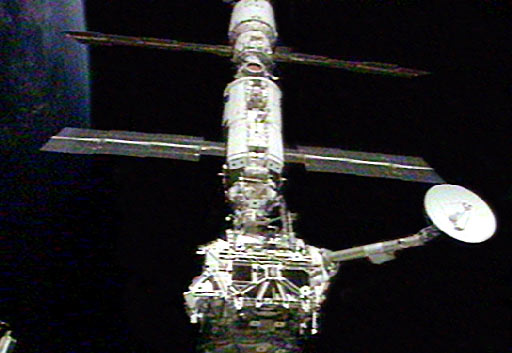 The space station with the Z1 Truss. Image Credit NASA

The station was now ready for the first Expedition missions. Expedition 1 was set to launch in a Soyuz from the same launchpad used to usher in the Space Age with Sputnik and the legendary Yuri Gagarin’s Vostok 1. The launch went off at 0253 on October 31, 2000.

10 years after their stay on the ISS, William Shepherd and Sergei Krikalev look back on their experiences. 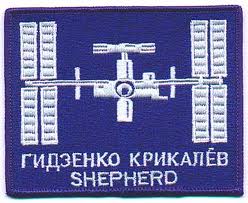 Station Commander William Shepherd, Soyuz Commander Yuri Gidzenko and Flight Engineer Sergei Krikalev had been training for three long years for this. In the week leading up to the countdown, controllers put the International Space Station through a dress rehearsal for the docking. One of the three onboard computers went down and the controllers in Korolev focused on troubleshooting the cause.

The Soyuz completed the rendezvous at 0415 on November 1, 2000, and docked six minutes later. The crew powered down the spacecraft, made pressure checks, and opened the hatches. Shepherd assumed command and requested that controllers use the call sign “Space Station Alpha.” They activated equipment to make the station more livable, charged power tools and checked communications. Some tasks proved more challenging in zero gravity than in training and installation of a regenerative air-scrubbing system in Zvezda took longer than expected. At first, Korolev controllers made the exact same mistake that Houston controllers had once made in Skylab and tried to insist that the crew get back on schedule. This proved impossible and the tempers of the crew suffered for it. Finally, they agreed to let the crew work at their own pace for the first few days.

Over the next days, the Expedition 1 crew made upgrades to the climate control system, hooked up an interface that would allow laptops to interact with the central computer system and set up a radiation monitor to keep track of their exposure to radiation from increased solar activity. On November 5, the ground also monitored the first recorded near-miss of orbital debris with a trajectory that took it within two kilometers of the station. During an ongoing inventory of items on the space station, Krikalev updated a program that could read barcodes and keep track of where items were at any given time. After a three-day break, the crew began wiring a “ham” radio that would allow them to talk to students and space fans and prepared for the arrival of Russia’s Progress-M1 4, which would deliver an additional 1,815 kilograms of supplies and logistics. 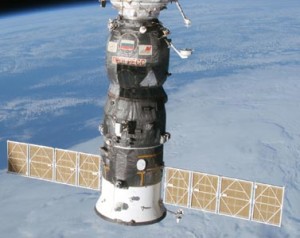 Progress-M1 4 was an automated spacecraft that launched at 2033 on November 15th. It spent two days catching up to the International Space Station. Everything seemed to be going smoothly until the Progress failed to lock onto Zarya’s radar transponder. That meant Gidzenko had to take control of the Progress using the TORU hand controllers. The Russians had practiced piloting automated spacecraft by remote control on Mir with mixed success and frightening near-misses on the first couple of tries. With degraded vision due to the glare from the sun and a lens that fogged up, Gidzenko had to wait until after sunset to finish bringing the Progress in. He brought it in successfully and the crew spent the next several hours powering down the Progress’s systems. After a weekend off, the crew unloaded and logged the inventory. In the meantime, engineers on the ground determined that the Progress’s computer hadn’t been able to distinguish between Zarya and Zvazda and updated the software. Testing of the new software was cut short by the planned visit by STS-97, only a few days away. 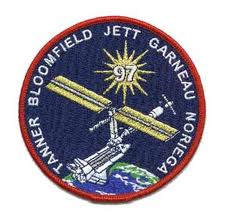 Over the next few days, Expedition 1 logged and stowed gear from Progress and Endeavour, replaced a part on the carbon dioxide scrubber, and took care of the handful of experiments on board. The press sensationalized the malfunction in the carbon dioxide scrubber and suggested that another malfunction could force the crew to evacuate. Shepherd was quick to assure the public that the International Space Station had sufficient backups that the crew would be all right if something happened to the main system. The Russians quietly added replacement parts for the scrubber to the cargo planned for the next Progress delivery.

NASA okayed plans to test the Progress-M1 4 docking mechanism on Zarya’s nadir port on the understanding that it would be called off at the first sign of trouble. On December 19, Gidzenko got more practice with the remote control TORU and docked it successfully at 0630. Some of the electronics were removed for analysis once they were returned to Earth.

During Christmas, the crew took a break to admire the view of Earth and talk to their families. Shepherd regretted that they hadn’t been able to bring along a Christmas tree. On January 1st, 2001, he wrote a nine-verse poem in honor of the first New Year’s Day aboard the International Space Station.

The first week of 2001 saw more experimental and maintenance work. Another battery on Zvezda went down, limiting the available power. They spent the next couple of weeks preparing for the arrival of STS-98, which would deliver the Destiny module. Tests of the hatches turned up a piece of air duct that was fouling a latch. Shepherd cleared the obstruction and more testing turned up no more problems. The launch of STS-98 ended up being pushed back to February. On the ground, NASA’s Marshall Space Flight Center was preparing to open the ISS Payload Operations Center (POC) to help coordinate activities related to scientific experiments, troubleshooting, scientific payload safety and activity planning. This was expected to help the International Space Station become more productive scientifically in future expeditions. 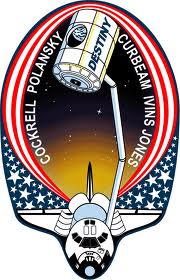 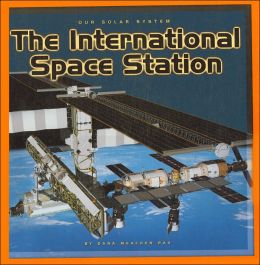 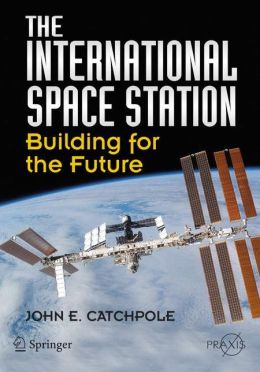