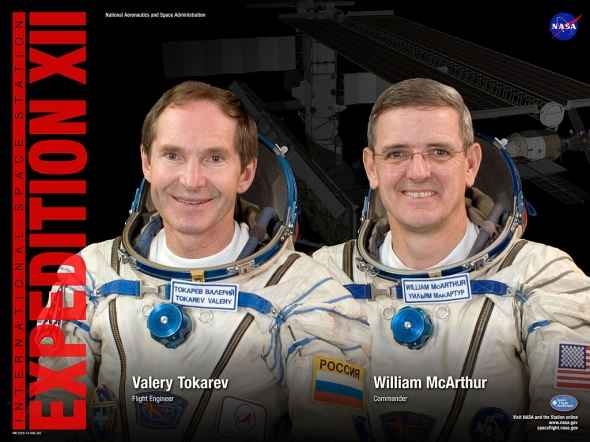 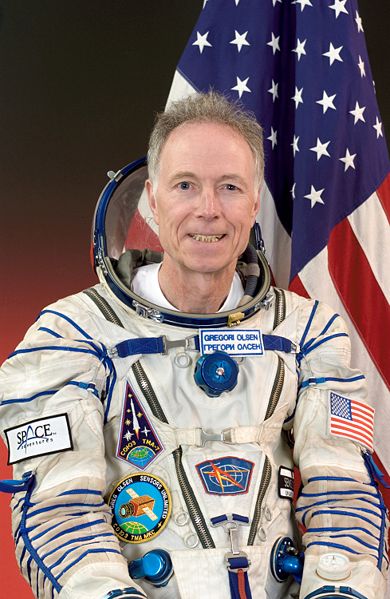 In interviews, Olsen went on record with his dislike of the term “space tourist,” saying that flying in space wasn’t just a matter of buying a ticket. He had devoted close to two years to preparations for this flight that included a temporary grounding due to a medical condition. He also performed a few experiments for the Russians and ESA that included growing crystals and testing a new camera. Some of his biomedical experiments led to the discovery of a new kind of harmless bacteria that apparently spawned on the International Space Station. He also tested new ways to prevent and treat Space Adaptation Syndrome, an infamous form of motion sickness that affects a large percentage of people traveling in space. 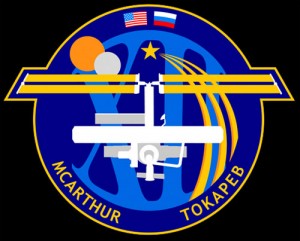 After several days’ worth of handover duties, the crew members of Expedition 11 and 12 held their official handover ceremony, and then Gregory Olsen returned home on Soyuz TMA-6 with the Expedition 11 crew. In pre-flight interviews, William McArthur and Valery Tokarev had reflected on their hopes for the return of the Space Shuttle, which would bring up elements for continuing the construction of the International Space Station. As a two-man “caretaker” crew, their main concern was keeping the Space Station in an operational condition and they also had a series of experiments that would hopefully improve the self-sufficiency of crews on long-duration missions.

The original arrangement between the USA and Russia to provide Soyuz spacecraft was due to end during Expedition 12. This meant Russia would have been under no legal obligation to return McArthur to Earth at the end of his stay and he could have been stuck on the Space Station until the next Shuttle visit. While NASA tried to find a way around the Iran Non-Proliferation Act, the Russians approved funding for their space program that hinged on partnership with the European Space Agency that included development of a “Kliper” spacecraft designed to replace the Soyuz and the development of a Multi-purpose Science Module.

Despite the international politics happening planetside, McArthur and Tokarev worked smoothly together on housekeeping, maintenance and experiments. They participated in an emergency evacuation drill, changed a battery in the Zvezda module and rearranged items in Unity. They kept logs of their food intake and donated urine samples for the Renal Stone Experiment. McArthur worked with the Pulmonary Function System, a collaborative effort between NASA and the ESA to improve monitoring of lung function on the International Space Station.

Tokarev continued efforts to keep the Elektron oxygen generator up and running by purging bubbles from its plumbing. Maintenance on the Russian side of the space station also included an attempt to repair the Trace Contaminant Control System, replace smoke detectors and replace a malfunctioning pump in a thermal control loop. After an abortive attempt to use Progress M-54’s engines to boost the space station’s orbit, Russian controllers went into troubleshooting mode and performed test firings of the Progress engines.

In preparation for the first EVA of Expedition 12, Tokarev and McArthur checked out their EMUs and rehearsed planned activities. On November 2, 2005, they marked the fifth anniversary of manned operations on the space station by sending messages of congratulations to astronauts and cosmonauts of past Expeditions and to the engineers and scientists who had worked to support the International Space Station. 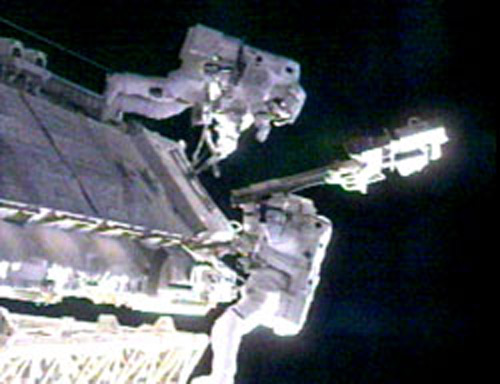 The first EVA of Expedition 12 began on the morning of November 7. Wearing the new American EMUs that had been brought up with STS-114, McArthur and Tokarev exited through the Quest module after a brief delay to reset a misaligned valve in the inner chamber of the airlock. They retrieved tools and parts, and then made their way along the ITS. They installed a television camera on the Port-1 ITS, which would help with adding new structures to the end of the ITS. They removed a Rotary Joint Motor Controller for return to Earth to determine why it had failed. Then, they made their way to the P-6 Truss. Images from STS-114’s photography of the station exterior had revealed that the Floating Potential Probe used to monitor the electrical environment around the station’s Solar Array Wings was falling apart. McArthur removed it and gave it a shove to turn it into an independent satellite that would eventually burn up in Earth’s atmosphere. The two spacewalkers replaced a faulty circuit breaker on the Mobile Transporter. McArthur and Tokarev then returned to the Quest module. The EVA had lasted 5 hours and 22 minutes. Over the next few days, McArthur and Tokarev performed some maintenance on the EMUs they had worn. 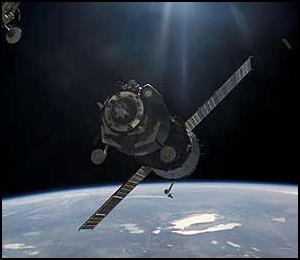 After the successful EVA, the Expedition 12 crew settled back into the routine of maintaining equipment and handling experiments. McArthur photographed the Binary Colloidal Alloy Test experiment designed to study the performance of solid nanoparticles suspended in liquids in microgravity.

On November 18, the crew put the space station in standby mode and moved the Soyuz TMA-7 from Pirs to Zarya’s nadir docking port. As a test, controllers on the ground used the newly installed camera on the Port-1 ITS to capture images of the Soyuz in transfer. This would free up Pirs for an EVA that was tentatively scheduled for December 7, though controllers on the ground decided to move the second EVA to February 2006 to give the Expedition 12 crew more time to prepare Progress M-54 for undocking. The first EVA had gone smoothly enough that a third planned EVA was canceled as unnecessary.

McArthur made a series of test maneuvers with Canadarm2 and left it in a position where its cameras could monitor activity for the February EVA. He also took care of some of the biomedical experiments in one of the Human Research Facilities, HRF-2. He also set up a refrigerated centrifuge, continued work with the Binary Colloidal Alloy Test and InSPACE experiments for studying colloidal substances, and replaced fuses in a Trace Contaminant Monitor.

Meanwhile, Tokarev was keeping busy with maintenance on the Russian side of the station. He transferred oxygen and fuel from Progress M-54 to the International Space Station, installed a muffled adjustable fan that would hopefully reduce the ambient decibel level in crew quarters, and made repairs to air ducts in the American part of the station. A cable on the Mobile Transporter was mistakingly cut due to a malfunction in the Disconnect Actuator System, leading to the loss of power and data delivery on the Mobile Transporter system. A second cable was still intact.

On Earth, the European Space Agency announced that the first planned Ariane V/ATV flight would be delayed until 2007 due to technical difficulties. With help from Congress, NASA was able to find a way around the Iran Non-Proliferation Act to continue flying American astronauts on Russian vehicles. Russia responded by agreeing to double the production of Soyuz spacecraft. That helped to improve the prospect of Expedition crews eventually being increased to six people. 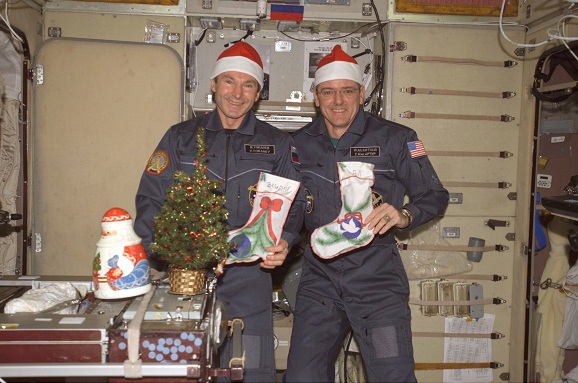 Progress M-55 replaced M-54, automatically docking on December 23. The crew spent the week before Christmas unpacking food that included 14 kilograms of fresh produce, consumables, spare parts and experiments, along with recording educational videos and checking the hatch seals in the American part of the station. On Christmas Day, the crew had a light day. They opened Christmas presents brought up on the Progress, spoke to their families and had a traditional Russian meal. December 26 and January 2 were also days off in keeping with U.S. rules that gave government employees Monday off if a national holiday fell on a Sunday. January 9 was also a day off as the final day of the Russian holiday.

In between holidays, activities included placing a “phantom Torso” equipped with radiation detectors in Pirs, more work with the Binary Colloidal Alloy Test (BCAT-3) and placing EarthKam in one of the station’s windows for more Earth photography by students. They also installed the Recharge Oxygen Orifice Bypass Assembly (ROOBA) that would allow astronauts handling EVAs during a Shuttle visit to use oxygen from the Shuttle. McArthur used Canadarm2 to capture images of the damaged cable on the Mobile Transporter and the Common Berthing Mechanism (CBM) on Unity’s nadir, and then moved it back to a position where it could capture images for the EVA scheduled for February. 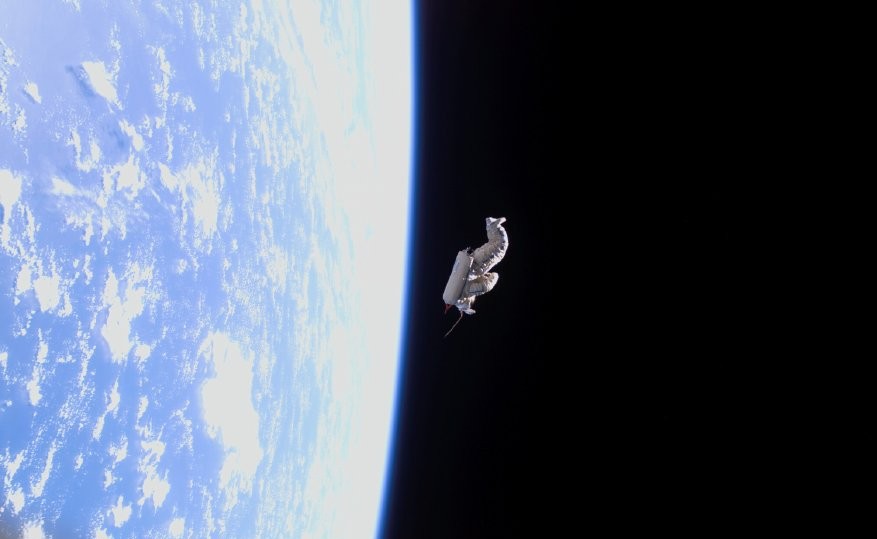 days later, McArthur and Tokarev began preparations for their EVA. They equipped an Orlan suit that had outlived its useful life with a radio and television transmitter and then stuffed it full of garbage. It would be pushed into its own orbit, transmitting messages of greetings in six languages. It became known as “RadioSkaf” and “Radiosputnik” though the Earthside news services insisted on calling it “Suitsat”.

The EVA began at 17:44 on February 3 with McArthur and Tokarev leaving Pirs in Orlan suits. They mounted RadioSkaf on a ladder and then released it. The transmitter worked for a little more than two weeks, transmitting its greetings until it gave out. Listeners reported that the transmissions sounded weak but still could be heard by amateur radio operators, listeners with police scanners and other radio devices with highly sensitive VHF equipment that could pick up the suit’s 145.990 MHz FM radio frequency.

Once that was done, the two spacewalkers moved a grapple fixture adapter for the Strela crane from Zarya to the Pressurized Mating Adapter (PMA-3) mounted on Unity. They moved on to the faulty cable cutter that had damaged the Mobile Transporter and attempted to drive home a safety bolt. Failing that, McArthur removed the cable from the cutter and tied it to a handrail with a piece of wire as a stopgap measure. Repairing the damaged cable was added to the EVA plans for the STS-121 mission. The crew moved on to Zvezda, where they took photographs of the module’s exterior. Tokarev retrieved the Biorisk-2 experiment, which studied the effects of long-term exposure to the space environment on biological samples. The crew returned to the Pirs airlock with an EVA duration of 5 hours and 43 minutes. 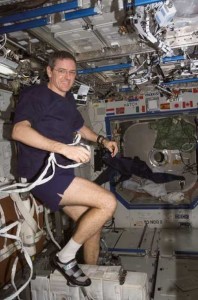 After the second EVA, Expedition 12 continued with more biomedical experiments, routine maintenance on the treadmill, and two firings of Progress M-55’s engines to boost the space station’s orbit. McArthur troubleshooted a faulty Mass Constituent Analyzer (MCA) meant to measure the air composition in the Destiny module. The flight of STS-121 was delayed until July 2006 but McArthur got a head start on preparations to install new experiment racks in Destiny anyway.

McArthur made practice runs with CanadArm2 on March 8, and then controllers in Houston used it to capture images of the cutter that had damaged the Mobile Transporter. Those images would hopefully be used to troubleshoot and plan for repairs.

Tokarev and McArthur moved the Soyuz TMA-7 spacecraft from Pirs to Zvezda on March 20 as part of preparations for the arrival of Soyuz TMA-8 and the Expedition 13 crew. Korolev congratulated the Expedition 12 crew for being the first to dock to all three of the docking ports designed for Soyuz spacecraft. For the rest of the month, they finished up final experiments and prepared for the crew transition. They also photographed a total solar eclipse on March 29.

On April 3, the Expedition 12 crew slept in the Quest airlock as part of a study for potentially revising procedures for preparing for an EVA. The pressure in the airlock was reduced at 19:45. Four hours into the sleep period, an alarm woke the crew and controllers decided to abort the experiment to stay on the safe side. The Expedition 13 crew had arrived just days before and the crew was more than ready to return home.

In the meantime, plans were being made to bring the International Space Station to the “Core Complete” phase. It included plans for sixteen more Space Shuttle flights before the Shuttle was retired. The revised plans also included moving up the launch of European and Japanese experiment modules and using robotic spacecraft from the ESA, Russia and Japan to deliver equipment that had originally been slated to launch on the Space Shuttle.