USAF Colonel Eileen Collins is the first woman to command the Space Shuttle. She also flew on STS-63 in 1995 and STS-84 in 1997 and commanded STS-93 in 1999. In this video, she talks about the Shuttle Return to Flight with STS-114 Discovery.

Remaining Obstacles For Return To Flight 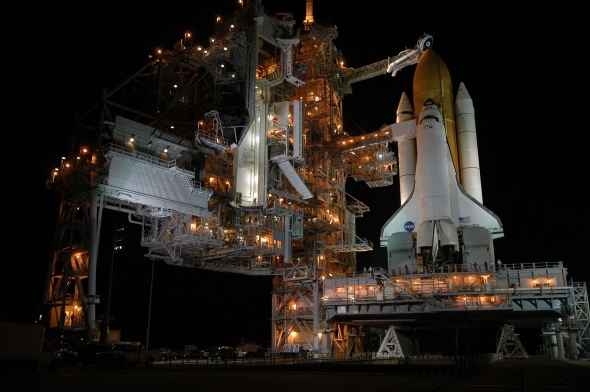 Discovery is ready for the Shuttle Return to Flight mission, STS-114.

The loss of Columbia on February 1, 2003, had put a crimp on the International Space Station’s schedule and caused a rethink in the plan for human space flight. Sean O’Keefe had formed the Return to Flight Task Group, which had been good about keeping NASA from jumping ahead or skipping recommendations even though it meant a series of delays in the launch of STS-114. One of the final tasks was to install a new External Tank that contained anti-ice formation heaters to help solve some of the issues that had caused the loss of Columbia.

The launch set for July 13 was canceled due to a faulty fuel sensor with a new date set for July 26th. This provided a convenient window for transferring the Soyuz from Pirs to Zarya so that Pirs could be used for a Stage EVA set for August. Krikalev and Phillips set the International Space Station to standby mode, and then sealed themselves in the Soyuz. Krikalev flew the Soyuz around to the Zarya module, handled station keeping for fourteen minutes, and then docked to Zarya. With the crew safely back on the International Space Station, they reconfigured it for occupation and continued their preparations for the return of the space shuttle.

As Narrated By The Astronauts 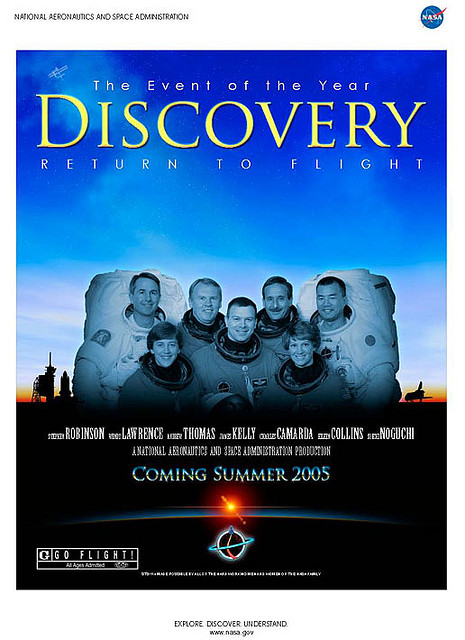 The new STS-114 crew was made up with members of two crews who had been in place before the STS-107 disaster. Mission Specialists Wendy Lawrence, Andrew Thomas, and Charles Camarda had been original STS-114 crew members. The original STS-116, which would have carried the original three-man Expedition 7 crew to the International Space Station, consisted of Mission Commander Eileen Collins, Pilot James Kelly and Mission Specialists Stephen Robinson and Soichi Noguchi. Most of the original logistics mission remained in place, including delivering the MPLM and a replacement Control Moment Gyroscope to help with repairing the ailing attitude control system.

Filmed by multiple cameras that took high-resolution video at 100 different angles, the launch went off smoothly at 10:39 on July 26, 2005. Analysis of the video revealed that the Discovery had lost a small piece of heat shielding near the nosewheel doors. An attempt to repair tiling in that area had apparently been insufficient to prevent the loss. A large piece of debris was also seen falling away from the ET. Fortunately, it did not strike the orbiter but it could have been fatal to the Discovery. It became clear that there was some more work to do before the Shuttle program could resume a normal schedule and NASA officials announced that the rest of the fleet would be grounded until the shedding problem could be solved.

Noguchi took video of the ET as it was jettisoned. The crew unberthed the shuttle’s Remote Manipulation System (RMS), which was a smaller robotic arm designed for use on the Space Shuttle, and used it to photograph the new Orbiter Boom Sensor System (OBSS), which replaced the older Ku-band antenna. Eileen Collins transmitted her respects to the crew of STS-107, “We miss them and we are continuing their mission. God bless them tonight, and God bless their families.” Once this was done, the crew began their first night in space at 16:00 and received their wake-up call at 00:39.

During Flight Day Two, the crew was occupied with using the RMS and OBSS to send sensor data and photographs down to Houston for analysis. Once the OBSS completed a laser-video scan of the Discovery’s exterior, it was re-berthed. Kelly and Thomas then used the RMS cameras to capture video of the Thermal Protection System on the crew compartment. Once this was complete, the crew extended Discovery’s docking ring and inspected docking equipment in preparation of rendezvous and docking with the International Space Station. 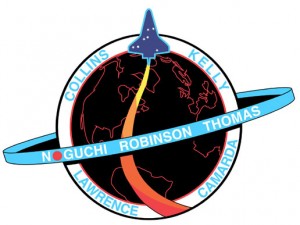 During the first full day of operations, Lawrence and Kelley operated the SSRMS to transfer the Raffaello MPLM from the Discovery’s cargo bay to its docking port on Unity. Once Raffaello was secure, electrical power was sent from the station to the MPLM and the hatches were opened. While unloading of the cargo began, Kelly and Phillips worked to move the SSRMS from the Destiny module to the Mobile Base System (MBS) normally used to house the robotic arm and positioned it so that its cameras could monitor the progress of Camarda and Kelly as they worked with the Shuttle’s OBSS. Camarda and Kelly then used the OBSS to survey six areas on Discovery’s heat protection system that ground controllers were most concerned about. While program managers were optimistic about Discovery making a successful landing, Collins later remarked, “Personally, I didn’t expect any large piece of foam to fall off the External Tank. I thought we had that problem licked.” Noguchi and Robinson continued preparations for their first EVA, slated fro July 30.

Here’s a snippet of STS-114 EVA in which Stephen Robinson removes a piece of tile gap filler from the underside of the Discovery. 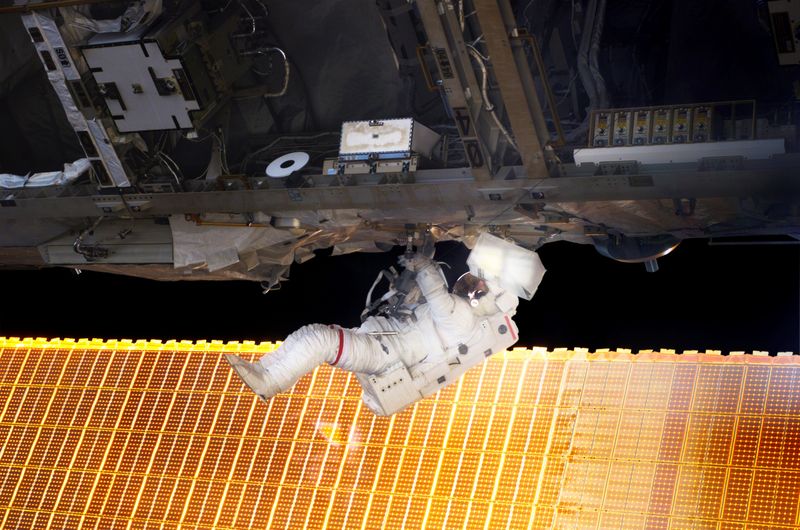 Stephen Robinson and Soichi Noguchi began their EVA at 5:46 A.M. on July 30, exiting through the Discovery’s airlock. Before beginning their tasks, they took a moment to admire their surroundings. “What a view,” commented Noguchi. Robinson said, “There are just no words to describe how cool this is.” In the meantime, the Quest airlock on the International Space Station was opened to provide an emergency entryway if the two spacewalkers needed it.

They began with a demonstration of methods for repairing damaged heatshield tiles. One method was known as the Non-Oxide Adhesive Experiment (NOAX), which used a pre-ceramic polymer sealant mixed with carbon-silcon carbide powder. It could repair cracks in the tiles used for heat shielding but wouldn’t be used for holes. The other was called the emittance wash application (EWA), which could be used for shallow tile damage and as a primer for improving the silicone-based Shuttle Tile Ablator-54’s adhesive properties.

With the demonstration complete, Noguchi and Robinson moved on to the exterior of Quest, where they installed the External Stowage Platform-2 Attachment Device (ESPAD) and hooked up its cabling. Noguchi replaced a GPS antenna on the ITS. Robinson gathered the tools for their next EVA and rerouted power plugs to send power to CMG-2, which had been offline since tripping a circuit breaker earlier that year. Houston began powering it up to return it to service as part of the International Space Station’s attitude control system. The astronauts finished up by gathering two long-term exposure experiments and photographing some insulation on the exterior of Discovery’s crew department. Then, they returned to Discovery’s airlock and the Quest airlock was closed. The EVA had lasted 6 hours and 50 minutes. 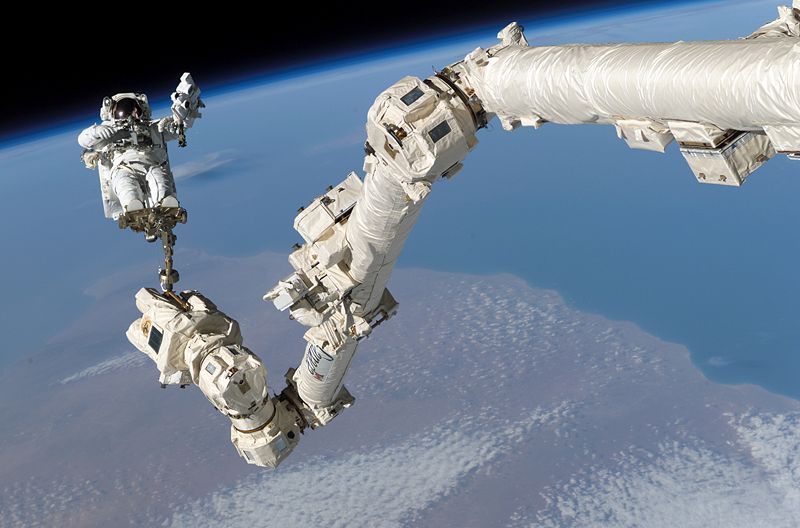 The combined International Space Station and Discovery crews spent most of July 31 unpacking equipment brought up in Raffaello and repacking it with equipment scheduled to return to Earth. They also handled interviews with reporters. Noguchi and Robinson prepared for the EVA scheduled for the next day while Lawrence and Kelly walked the Canadarm2 (SSRMS) to its position on Destiny.

On August 1, Noguchi and Robinson opened Discovery’s airlock hatch. While they prepared their tools, Houston turned off the electrical power to the Control Moment Gyroscope, CMG-1, they were going to replace. It hadn’t been functional since 2002 and this marked the first time the partners could bring up a new one in the more spacious Shuttle. The astronauts worked their way to the Z-1 Truss and Noguchi mounted the platform on Canadarm2. Inside the space station, Lawrence and Kelly used Canadarm2 to transfer Kelly to his workstation. During the ride along the truss, he commented, “Oh, the view is priceless. I can see the moon.”

The removal of the old gyroscope went well, with Noguchi lifting the device to ride with him back to Discovery’s payload bay. The new gyroscope was removed from its crate and the old one was stored for return to Earth. Noguchi took the new CMG back to the Z-1 Truss. Robinson and Noguchi worked together to install the new CMG and it was brought up to full power for testing. Controllers in Houston monitored its behavior for several hours and then added it to the station’s attitude control system. The two men returned to the Discovery after an EVA of 7 hours and 14 minutes. The combined crews spent the rest of the day transferring items between the International Space Station and the Discovery. 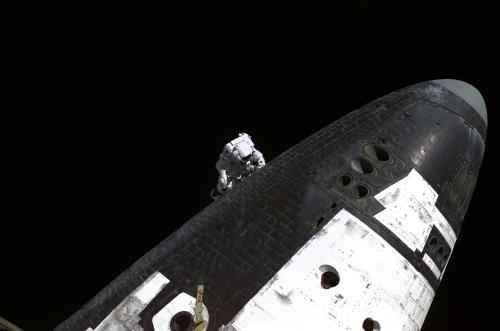 Preparations for the third EVA on August 3 included using Canadarm2 to remove the External Stowage Platform (ESP-2) from the Discovery’s cargo bay and some additional rehearsal maneuvers with the robotic arm using one of the station’s laptops. Houston decided to add an attempt to remove two protruding gap fillers on the underside of the Discovery to the EVA timeline. Noguchi and Robinson exited through Discovery’s airlock at 04:48 and made their way to the ESPAD that they had installed on their first EVA. Inside the station, Lawrence and Kelly used the robotic arm to transfer ESP-2 to their position. Noguchi and Robinson secured it in place and then Canadarm2 was transferred to the MBS on the truss structure. Noguchi installed the MISSE-5 material exposure experiment and removed the Rotory Joint Motor Controller from the ITS to place in storage.

Meanwhile, Robinson used Candarm2 to maneuver into place under Discovery’s nose. Removing the two errant gap fillers proved easier than expected. He told Houston, “It looks like the big patient is cured!” Noguchi and Robinson returned to the Discovery airlock with an EVA duration of 6 hours and 1 minute. 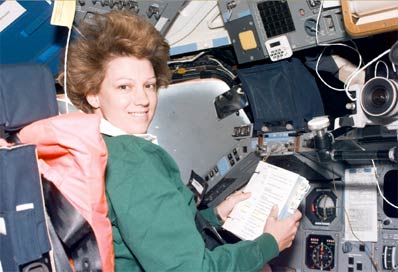 August 4 was a day of light duty that started with Lawrence and Kelly moving Canadarm2 from the MBS to Destiny. Krikalev and Phillips also made adjustments to the Unity’s CBM. Then, they used it to grasp Raffaello in preparation of moving it back to Discovery’s docking bay. They spent a lot of the day stowing equipment. Discovery took images of the station’s exterior for later analysis. Noguchi received a call from the Japanese Prime Minister and U.S. President Bush called to congratulate the STS-114 crew on their mission. Near the end of the day, they paused to pay their respects to the lost STS-107 crew along with all the astronauts and cosmonauts who had lost their lives in the exploration of space.

The next day, Canadarm2 transferred the Rafaello MPLM from Unity to the Discovery’s payload bay. It was loaded with 3,175 kilograms of cargo, some of which dated back to Expedition 6. The Shuttle’s OBSS was folded up along the starboard payload bay door. Equipment was stowed inside Discovery in preparations for departure. After a sleep period, the two crews had a farewell ceremony at 00:36, sealed the hatches for the final time, and undocked at 02:24 on August 6. Kelly performed a fly-around maneuver and then moved clear of the ISS. The shuttle crew had a relaxing rest of the day. Most of August 7 was spent stowing cargo for reentry while Houston took care of a last few items related to reentry and decided that none of them were very worrying. On August 8, two windows for reentry and landing at the Kennedy Space Center ended in wave-offs due to weather. The Discovery finally landed in the pre-dawn darkness at Edwards Air Force Base.

Krikalev and Phillips sent their congratulations from the International Space Station. In a speech, NASA Administrator Griffin acknowledged the risks involved in space flight and the fact that they still had a few issues to work out before the space shuttle returned to a more regular schedule. Though Administrator Griffin was optimistic about getting the remaining difficulties with the shuttle solved quickly, the next launch was pushed back to March 2006. The remaining External Tanks would be tested and modified based on post-landing findings.