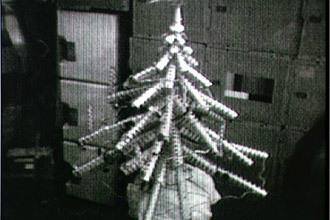 Do you feel sorry for people who have to spend holidays away from home? I’m bummed for military men on deployment, too. When you aren’t lucky enough to have relatives who send you a care package for the holidays, MRE packets don’t make for an appetizing holiday meal. It’s a little bit different for astronauts who spend their holidays in space. They really are creative about how they react to spending holidays away from their families. Astronauts probably aren’t going to get a genuine home-cooked meal, either, but holiday missions did create some of my favorite moments in the space world.

A series of delays in Gemini 6 led to an interesting series of firsts for the American space program. It was the first time that NASA had two missions in orbit at the same time and the first genuine rendezvous in space. Thanks to Wally Schirra’s well-known sense of humor, the Gemini 7/6 mission also led to the first reported UFO during a mission and the first time a Christmas carol was played live in space.

The same mission that brought us the famous “Earthrise” picture was also the first manned mission to orbit the Moon and the first time that the crew read from the Christian Bible’s Book of Genesis live over the radio. It did lead to a major flap between NASA and the atheist community, but it was simply the crew’s way of recognizing the significance of the season.

Besides setting a duration record in orbit, Skylab 4 boasted the first Christmas tree in orbit, apparently made from emptied food cans. Unfortunately, I couldn’t find a good video of a Christmas celebration on Skylab, but here’s Skylab 4 crewman Gerry Carr giving a presentation on America’s first space station.

What could be a better way to celebrate Christmas than a couple of spacewalks? Seriously, though, the Expedition 38 crew made Christmas 2013 awesome with two pre-Christmas EVAs to repair a faulty cooling system by American crew members Rick Mastracchio and Mike Hopkins. Two Russian Cosmonauts are scheduled to make a post-Christmas EVA on December 27. Christmas Day was marked by phone calls from orbit to family members on the ground and special holiday foods that were delivered by a Cygnus cargo ship.

What will the holidays look like when we start expanding to other worlds? Well, I sort of touched on that in another blog entry, but I’ll just say here that we’re likely to develop our own traditions. It’s possible that future Martian children will be watching for a Santa Claus in a red EVA suit riding a rocket ship pulled by eight Rovers. Holidays in space can be pretty cool if you don’t mind the fact that you’re travelling at an impressive speed miles above everything that’s familiar. It’s just a matter of being a little bit creative.

How Would Santa Handle This?

Let’s face it, delivering Christmas presents to children everywhere in one night is tough enough on Earth. What do you do when humanity begins to spread throughout the solar system? Santa knows the answer: just train some Elves for space flight!