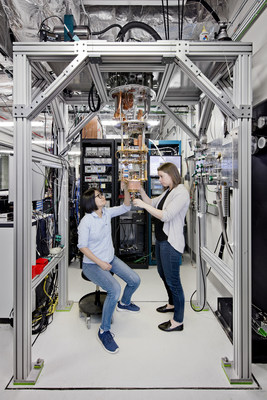 IBM has announced an industry-first initiative to build commercially available universal quantum computing systems. Known as “IBM Q,” this initiative will make use of quantum systems and services that can be delivered via the IBM Cloud platform. Traditional computers and supercomputers like IBM’s Watson are good at finding patterns in mountains of existing data and delivering insights that are useful to analysts in a variety of industries. Quantum computing will be capable of the computer version of “intuition” — making educated guesses in situations where there might be a gap in the data that prevents traditional computers from noticing a pattern. IBM is developing IBM Q to take any possibilities that need to be explored into account in situations where those possibilities are too enormous to ever be processed by classical computers.

The IBM Quantum Experience will enable connections to IBM’s quantum processor via the IBM Cloud. Users can use the quantum processor to run algorithms and experiments, work with the individual quantum bits, and explore tutorials and simulations around what might be possible with quantum computing/

“IBM has invested over decades to growing the field of quantum computing and we are committed to expanding access to quantum systems and their powerful capabilities for the science and business communities,” said Arvind Krishna, senior vice president of Hybrid Cloud and director for IBM Research. “Following Watson and Blockchain, we believe that quantum computing will provide the next powerful set of services delivered via the IBM Cloud platform, and promises to be the next major technology that has the potential to drive a new era of innovation across industries.”

IBM intends to build IBM Q systems to expand the application domain of quantum computing. A key metric will be the power of a quantum computer expressed by the “Quantum Volume“, which includes the number of qubits, quality of quantum operations, qubit connectivity and parallelism. As a first step to increase Quantum Volume, IBM aims at constructing commercial IBM Q systems with ~50 qubits in the next few years to demonstrate capabilities beyond today’s classical systems, and plans to collaborate with key industry partners to develop applications that exploit the quantum speedup of the systems.

IBM Q systems will be designed to tackle problems that are currently seen as too complex and exponential in nature for classical computing systems to handle. One of the first and most promising applications for quantum computing will be in the area of chemistry. For molecules such as caffeine, the number of quantum states in the molecule can be astoundingly large – so large that all the conventional computing memory and processing power scientists could ever build could not handle the problem.

IBM’s scientists have developed techniques to efficiently explore the simulation of chemistry problems on quantum processors, which can be found on Arxiv.org here and here. Similar techniques that can explore experimental demonstrations of various molecules are in progress. In the future, the goal will be to scale to even more complex molecules and try to predict chemical properties with higher precision than possible with classical computers.

Future applications of quantum computing may include:

“Classical computers are extraordinarily powerful and will continue to advance and underpin everything we do in business and society. But there are many problems that will never be penetrated by a classical computer. To create knowledge from much greater depths of complexity, we need a quantum computer,” said Tom Rosamilia, senior vice president of IBM Systems. “We envision IBM Q systems working in concert with our portfolio of classical high-performance systems to address problems that are currently unsolvable, but hold tremendous untapped value.”

IBM’s roadmap to scale to practical quantum computers is based on a holistic approach to advancing all parts of the system. IBM will leverage its deep expertise in superconducting qubits, complex high performance system integration, and scalable nanofabrication processes from the semiconductor industry to help advance the quantum mechanical capabilities. Also, the developed software tools and environment will leverage IBM’s world-class mathematicians, computer scientists, and software and system engineers.

“As Richard Feynman said in 1981, ‘…if you want to make a simulation of nature, you’d better make it quantum mechanical, and by golly it’s a wonderful problem, because it doesn’t look so easy.’ This breakthrough technology has the potential to achieve transformational advancements in basic science, materials development, environmental and energy research, which are central to the missions of the Department of Energy (DOE),” said Steve Binkley, deputy director of science, US Department of Energy. “The DOE National Labs have always been at the forefront of new innovation, and we look forward to working with IBM to explore applications of their new quantum systems.”

IBM believes that collaborating and engaging with developers, programmers and university partners will be essential to the development and evolution of IBM’s quantum computing systems.

Since its launch less than a year ago, about 40,000 users have run over 275,000 experiments on the IBM Quantum Experience. It has become a highly valuable research tool for scientists in over 100 countries and, to date, 15 third-party research papers have been posted to arXiv with five published in leading journals based on experiments run on the Quantum Experience.

IBM has worked with academic institutions, such as MIT, the  Institute for Quantum Computing at the University of Waterloo, and École polytechnique fédérale de Lausanne (EPFL) to leverage the IBM Quantum Experience as an educational tool for students. In collaboration with the European Physical Society, IBM Research – Zurich recently hosted students for a full-day workshop to learn how to experiment with qubits using the IBM Quantum Experience.

“Unlocking the usefulness of quantum computing will require hands-on experience with real quantum computers,” said Isaac Chuang, professor of physics and professor of electrical engineering and computer science at MIT. “For the Fall 2016 semester of the MITx Quantum Information Science II course, we featured IBM’s Quantum Experience as part of the online curriculum for over 1,800 participants from around the world. They were able to run experiments on IBM’s quantum processor and test out for themselves quantum computing principles and theories they were learning.”

In addition to working with developers and universities, IBM has been engaging with industrial partners to explore the potential applications of quantum computers. Any organization interested in collaborating to explore quantum applications can apply for membership to the IBM Research Frontiers Institute, a consortium that develops and shares a portfolio of ground-breaking computing technologies and evaluates their business implications. Founding members of the Frontiers Institute include Samsung, JSR, Honda, Hitachi Metals, Canon, and Nagase.

“We heavily invest in R&D and have a strong interest in how emerging technologies such as quantum computing will impact the future of manufacturing,” said Nobu Koshiba, president of JSR, a leading chemical and materials company in Japan. “Our pipelines of innovations range from synthetic rubbers for tires to semiconductor and display materials, along with products in the life sciences, energy and environmental sectors. By having exposure to how quantum computing can provide new computational capability to accelerate materials discovery, we believe this technology could have a lasting impact on our industry and specifically our ability to provide faster solutions to our customers.”