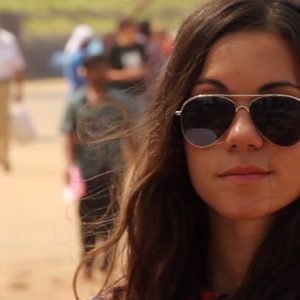 A still from the cbook Monsoon Tide.

But then there’s the story itself. To give you a very quick summary, it’s a story of an aide worker who goes to India in the wake of the Asian tsunami and she discovers her stepfather there. She used to live in India when she was a child, but she hadn’t been back for 15 years. She find the stepfather, who is haunted by the past, and soon discovers that there’s a big mystery around her mother’s death 15 years ago.

The rest of the story is really her finding out the answer to what’s happened to her mother and she enlists the help of the local policeman, for example, to do this.
As a story, it’s also set in two different timeframes. You’ve got 15 years separating the two parts of the story. As a book, you could write quite a lot about what happened in years in between, so there’s a lot of potential for writing a book around the Monsoon Tide story.
And, I suppose that one of the biggest things is that we made the film, Nick wrote the screenplay and he directed it. We worked with our own film to make the book. It’s not like somebody could go out there and just start cutting up any film and make a C-book. We had the rights to it.
HH: What was it like working together to create a seamless C-book for Monsoon Tide?
Nick: Well, we both knew the story, as well as each other, because Elsa had acted as my script editor throughout the writing process. Even though I’d written that screenplay, I really, when it came to the C-book, I wanted to have a different perspective. I wasn’t sure about writing it myself. There’s the fact that Elsa is a much better prose writer than I am. She seemed to be the logical choice. She knew the story, but she could also bring to the table some ideas around the movie, as well as her experience with the movie.
Elsa: Yeah, I mean, basically, we took 15 scenes from the film that we thought were very strong visually or pivotal points in the movie. I selected those and then I wrote 15 chapters in between those segments that joined them up, but also explored other parts of the story that weren’t in the film.
Basically, I would write a chapter and show Nick and Nick would sort of give his feedback. He would say, “That’s definitely the right lines,” or “I hadn’t thought of that. That’s quite interesting, yeah, keep that in there.” Most of the time we agreed and really, and then we obviously got other people who knew nothing about the story to view Monsoon Tide, the C-book. We had a website set up where they could look at it and we were able to see if they could follow the story in this format, whether it made sense to them, and they could. We thought, well, we must have done it right.
Nick: We must have done something right. [Laughs]
HH: [Laughs] Right. What has the public reaction to Monsoon Tide and C-books been like?
Nick: Well, it’s very, very early in the process. We can only talk about the reaction we had prior to launch where we had the test site and we got hundreds of people to come in to see it, to see if the thing worked. To see if they could flip from reading to watching, to reading to watching, because this was the biggest question mark for us, is it going to stutter the flow? Is it going to take you out of the story? Luckily, there was not one single person who flagged that up as a problem at all.
Our next thing was, let’s go get English teachers. In Britain we went to some English teachers to see what their reaction would be, because we didn’t have a clue whether they would like it, hate it, what are we doing, what are we doing to books, what are we doing?
Elsa: They really liked it.
Nick: They loved it! They said this is a great way to get reluctant readers into the kind of wonderful world of literature, whereas they hadn’t read before. It’s like when you read a big heavy book and you’ve got, after about 20, 30 pages, you know there’s some photographs there. It’s a visual treat to look forward to.
With our C-book, you have a short chapter to get through and then you have this visual treat where you’re transported to the time, the place, and that gives the reader incentive to read and the process is—they saw something in the process that they could really use. It really spurred us on.
Elsa: Now that we’ve sort of launched it, we’re really encouraged because we’ve had a lot of media interests. They’ve been furiously writing articles about the Cinematic Book and Monsoon Tide for lots of publications and we’ve been talking to people like you about the project.
Yeah, I think people are interested because it is something new and we think that it is a new way to experience story. Most people have kind of liked the idea, so that’s the feedback so far. But as Nick said before, it’s early days to see what the general reaction would be.
HH: Awesome. Well, that’s all the questions I’ve got. Anything you’d like to add?
Elsa: Well, I wanted to know, sort of, how do people access your—does this come out as a Podcast? What do you do with the interview?
HH: Well, I post it on YouTube and then I have it transcribed to put on my blog.
Elsa: What sort of people follow you?
HH: Technical people. Some of them really like—I bet of lot of them would like your idea of C-books.
Elsa: That’s good. If people are just—finally, to let you know, if people do want more information, we’ve got a website, which is cBooks.co. If people wanted to find out more, that would be the best place to find out more.
HH: Okay, I’ll go ahead and put a link to that in the video description.
Elsa: That’s great. It’s a real pleasure to talk to you.
Nick: Yeah, thank you.
Elsa: Thank you for calling us from over the pond! [Laughs]
HH: Thank you.