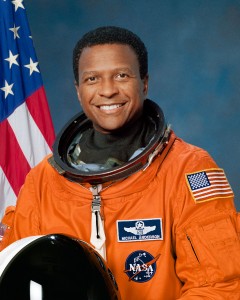 Born in 1959, Michael Anderson never doubted that he would become an astronaut. The Space Race was in full swing and he grew up watching shows like “Star Trek,” which included fictional role models like Lieutenant Uhura. Real-life heroes included his father, who was an Air Force officer. He also watched the first moon landing and memorized the names of astronauts.

Upon graduation from Cheney High School in Washington, he attended the University of Washington. He started out as a Mechanical Engineering major, but gravitated towards physics and astronomy. To pay for college, he joined the ROTC. After college, he joined the Air Force and learned to fly the KC-135 Stratotanker designed for mid-air refueling, and the T-38A, a relative of the jet trainer best known for serving the NASA astronaut corp. He logged more than 3,000 hours in jets and became an instructor pilot.

Knowing that education is very important for becoming an astronaut, he pursued a Master’s Degree in Physics at Creighton University in Nebraska, graduating in 1990. “It taught me to think like a scientist,” he said of studying physics.

He joined the astronaut corp in 1994 and spent the next years training to become qualified for crew selection. He was assigned to the Flight Support Branch of the Astronaut Office. At that time, only a few African-Americans were part of the astronaut corp. He envisioned a “really bright” future for minorities in space. Right before the final Columbia flight, he pointed out that three African-Americans were slated for missions scheduled for 2003. 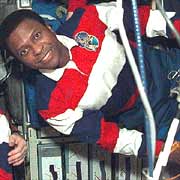 Anderson poses for a picture during the STS-89 mission. Image credit USA Today

His first crew assignment was STS-89 on the Space Shuttle Endeavour in 1998. The mission was the eighth Shuttle flight to visit the Russian space station Mir and they transported more than 9,000 pounds of logistical and scientific equipment. He remembered the transition between the 3Gs of launch to microgravity as a jolt forward in his seat. Everything began to float. Outside the window, water particles froze and broke off the Endeavour. “[T]hey looked like brilliant shining diamonds floating in the darkness of space,” he said of it. They weren’t tiny UFOs. The phenomenon of water coming off the spacecraft exterior had been well-documented since the days of the Mercury program.

Michael Anderson’s job included handling the actual docking with Mir. He felt like he had done this a million times in the simulator but the reality was much more thrilling. There was something different about bringing two actual multi-ton vehicles together. It was the reality of space flight and he was hooked. Upon returning to Earth, he declared, “I’m a lifer. I want to go back.”

There was stiff competition for every flight and he had to wait. Eventually, he was assigned to the crew of STS-107 as the payload commander. His duties included coordinating activities on board the Columbia and insuring that all of the experiments were designed to produce accurate results during the flight. Colleagues remembered him as a quiet and competent astronaut who could be counted on as a capable leader. He wasn’t very worried about the risk. He figured that the training process helped to inure astronauts to just about anything that could go wrong. 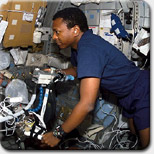 Michael Anderson works in the payload bay of the Columbia. Image Credit NASA

STS-107 launched on January 16, 2003. The crew conducted more than 80 experiments, sending results to scientists around the world on a regular basis. He spent most of his time in the payload bay where most of the experiments were housed. Experiments included a study of cancer cells that would hopefully improve treatment of prostate cancer. He told reporters in an in-flight interview, “We’re exceeding almost all of out expectations, and we’re getting some really good science.”

When the Columbia broke apart during reentry on February 1, 2003, Anderson lost his life with the rest of the crew. His surviving family members spoke of how he died flying in space, which he had always dreamed of doing even when he had no real African-American astronauts to look up to. “It was a future reality to him,” said one of his sisters, named Joanne. No other space shuttle flights took place that year but future Shuttle and Space Station missions included minorities as an integral part of the program. 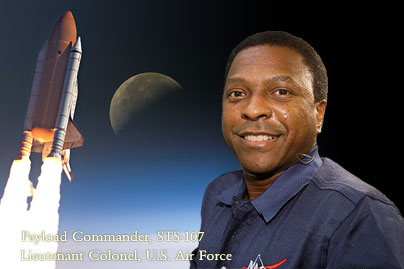