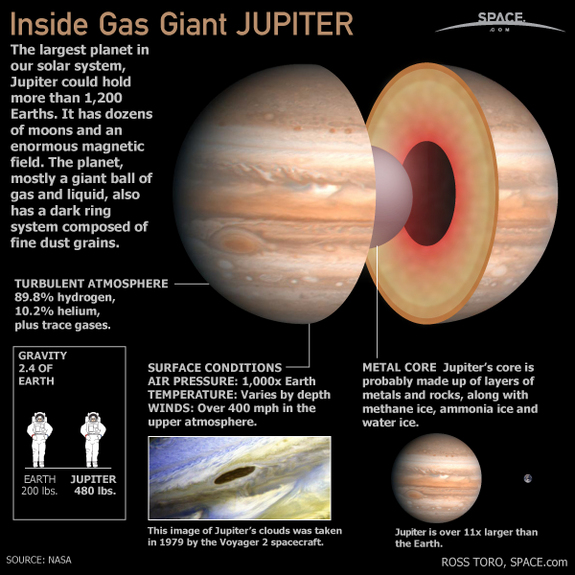 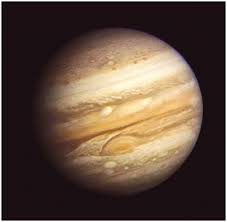 An image of Jupiter. Image credit The Big Foto

The second most massive object in the solar system and most massive of the planets, Jupiter was named for the Roman king of the gods. Its cloud belts and four largest moons can be seen using a small telescope. Jupiter and the other Jovian planets are occasionally referred to as &quot;gas giants,&quot; a misnomer since the tremendous pressures under the upper layers of Jupiter turns elements that would normally be gases, like hydrogen and helium, into liquids.

A Look At Jupiter

Jupiter by the Numbers

Does Jupiter Have A Solid Surface?

The interior layers of Jupiter. Image credit: Windows to the Universe

Nobody has ever directly observed a solid surface on Jupiter. “Landmarks” on Jupiter include the famous Great Red Spot, which is actually a gigantic hurricane. Astronomers believe that, under Jupiter’s cloud cover and atmosphere, the immense pressure creates an “ocean” of liquid hydrogen and, under that, a layer of liquid metallic hydrogen. (They call it “metallic” because pressures are so great that the hydrogen acts like a metal.) Under that, there may be a heavy-element core. 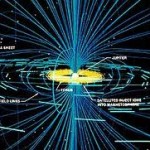 Jupiter has a magnetic field 14 times stronger than Earth’s. This magnetic field traps enough high-energy particles to produce strong radiation belts with a radiation output equal to one billion X-rays. These radiation belts actually damaged electronics in the Pioneer and Voyager probes that visited the planet and would kill a human if his spacecraft didn’t have sufficient radiation shielding.

As with Earth’s magnetosphere, Jupiter’s interacts with the solar wind to produce auroras. Some of the charged particles caught in the magnetosphere leak down into the atmosphere and produce auroras 1,000 times more powerful than Earth’s. They occur in rings around the magnetic poles. If you could survive a trip into Jupiter’s atmosphere, you would get an impressive show. 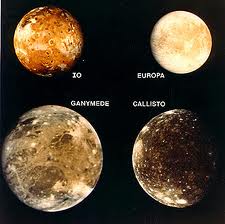 Jupiter has 63 known moons, giving it the record for most moons orbiting a single planet in the solar system. The four largest are Io, Europa, Ganymede, and Callisto and are called the Galilean moons. Galileo Galilei was the first to record observations of these moons in 1610.

Io is the most volcanically active body in the solar system. Its volcanoes are driven by powerful heat-generating tidal activity. Jupiter’s intense gravity tugs on Io as it orbits this planet, creating tides up to 100 meters (300 feet). Io’s volcanoes spout hot silicate magma.

Europa’s surface is covered by water ice, which covers a moon-wide ocean of water or slushy ice. Considering that life forms have been discovered in some of the most extreme environments on Earth, it is quite possible that Europa may have a habitable zone supporting some form of life. Jupiter’s gravity also creates tides and possible volcanic activity on Europa and there are signs that liquid water may occasionally break through the ice layer and freeze. Because it orbits within Jupiter’s radiation belts, it is constantly bombarded by high-energy particles that can damage the ice layer. This can cause water molecules to be broken up, causing a doughnut-shaped cloud that spreads around Jupiter and encloses Europa’s orbit.

Ganymede is the largest moon in the solar system and is slightly larger than Mercury. It has its own internally generated magnetic field, believed to be a remnant of greater dynamic activity in the distant past. (Remember the “dynamo effect” mentioned in the above section). It has a layer of liquid water about 170 kilometres below the surface and there are signs that some of this water broke through the surface to flood low-lying regions as the crust broke apart.

Callisto’s surface is heavily cratered. Many of these craters may date back to activity in the solar system. The surface is a mix of rock and frozen water, with a few patches that seem to be ice-free. A layer of liquid water may exist about 100 kilometers below the surface, kept from freezing by internal, heat-producing radioactive decay.

Io, Ganymede and Europa are locked into an eternal tug of war due to the way their gravity tugs on each other as they orbit Jupiter. For every time Ganymede orbits Jupiter once, Europa makes two orbits and Io makes four. Each time they catch up to each other, their gravity causes them to interact with each other. Sometimes this causes them to switch orbits! 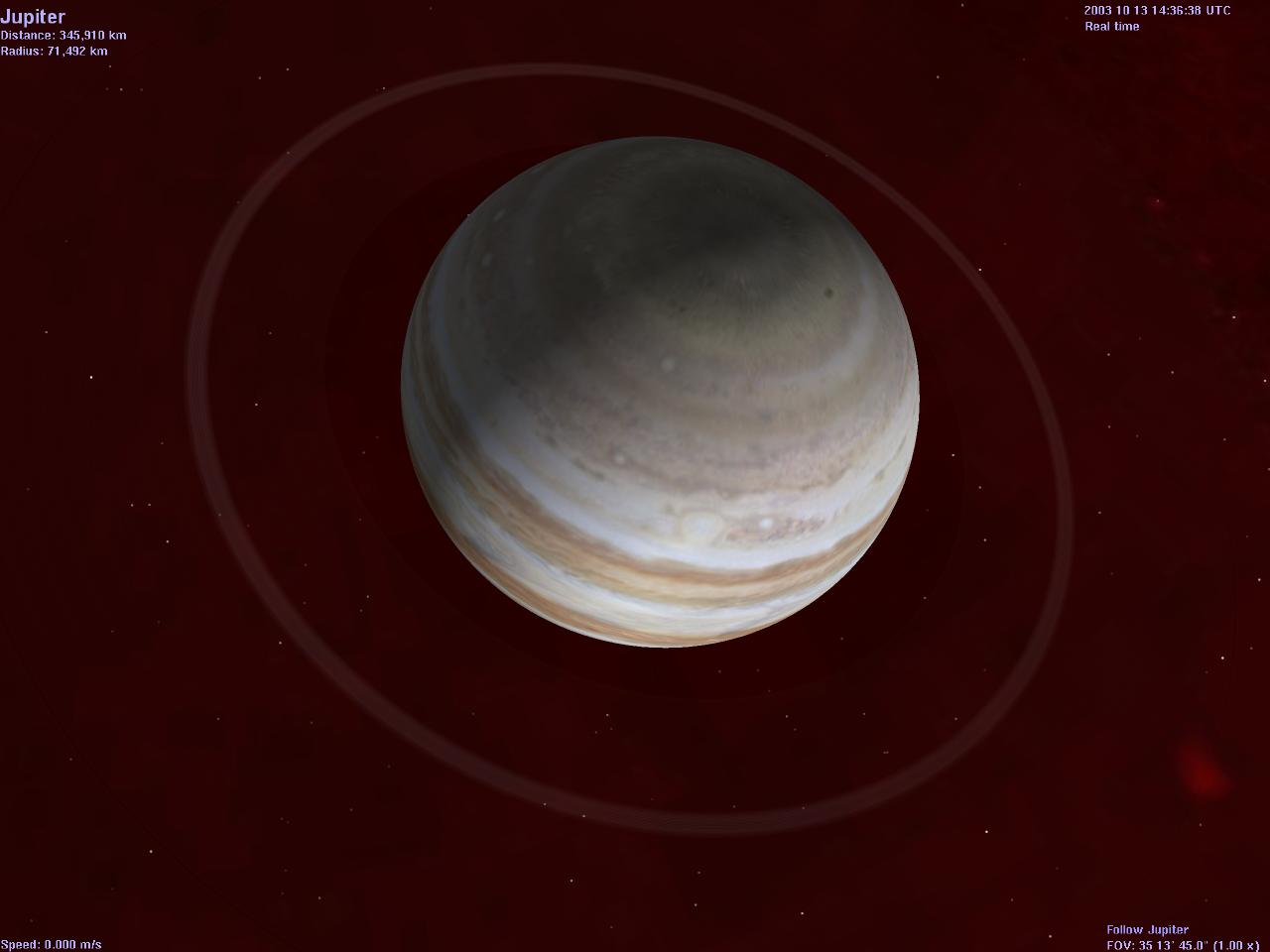 The first conclusive proof that Jupiter has a ring came relatively recently, when Voyager 1 sent back images in 1979. It is dark and reddish and only one percent as bright as Saturn’s rings. The ring particles are mostly microscopic and demonstrates a phenomenon known as forward scattering. Forward scattering occurs when particles have diameters that are approximately the same as the wavelengths of light, a few millionths of a meter. When this happens, there is no net change in the direction of motion of the scattered light. This results in the particles being very bright when lit from behind. It is possible that larger particles exist in Jupiter’s rings, but they have not yet been detected.

Jupiter’s ring is constantly disintegrating and being replenished by material chipped off from various sized rocks by meteorite impacts. Even as far as Jupiter is from the Sun, the pressure of sunlight works together with Jupiter’s magnetic field to alter the orbit of the particles. They gradually spiral inward toward the planet. Electromagnetic effects also force microscopic particles out of the ring’s plane to form a low-density halo above and below the ring. The intense radiation belts also grind the dust into even smaller particles. This is also proof that the material forming the rings are not left over from the formation of Jupiter.

The ring is densest at its outer edge, possibly being supplied mostly by material from the small moon Adrastea which orbits close to the edge, and by Metis, which orbits just inside the ring. The Galileo images also revealed fainter gossamer rings extending twice as far from Jupiter as the main ring. These rings are supplied by the small moons Amalthea and Thebe. The moons’ orbits also help confine the ring particles to certain boundaries by sweeping up straying dust.

I bet everybody who was old enough to witness this remembers how dramatic the Shoemaker-Levy 9 comet’s impact of Jupiter was.