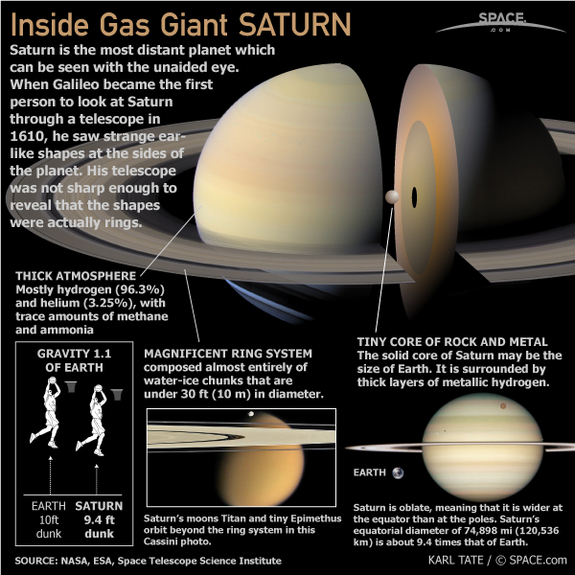 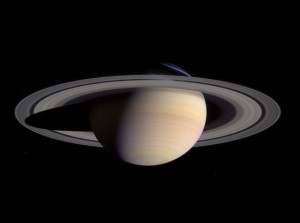 The sixth planet out from the sun, Saturn is named for the Roman god of the sowing of seed. Galileo is generally given the credit for discovering Saturn in 1609, but some sources believe that the Assyrians were the first to document observations of Saturn around 700 B.C. They called it the “Star of Ninib.” While observing the planet, Galileo believed that its spectacular rings were two separate objects, possibly moons. Christian Huygens recognized the rings as a disk in 1659, and Cassini sketched them as actual rings in 1676.

Saturn by the Numbers 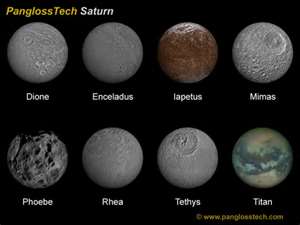 Saturn has more than sixty natural satellites. The largest and most interesting is Titan, which has an atmosphere and lakes of liquid methane. Some organic compounds, such as propane, have been detected. Titan’s atmosphere is mostly nitrogen with 1.6% methane. Its surface temperature averages -290 degrees Farenheit.

Phoebe is likely a captured Kuiper belt object with a retrograde orbit. Tethys shows signs of being geologically active, including volcanic activity. Enceladus is heated by tidal forces and may have liquid water beneath its icy crust.

Saturn’s moons regularly shed material through collisions and interactions with Saturn’s gravity, contributing to the rings. Small shepherd satellites sweep up material that strays outside the rings’ boundaries, confining them into narrow, well-defined bands. There is evidence that much of the rings’ material may have come from a moon that wandered too close to Saturn and was ripped apart by tidal forces. The rings will likely fade eventually as the ice particles they contain are either pulled into Saturn by its gravity, or are blown away by solar wind.

This dramatic image of Saturn’s rings, taken by Cassini, helped astronomers discover similarities between the dynamic activity in the rings and the behavior of a spiral galaxy. It also raised the possibility of new, undiscovered moons nestled in the gaps between the rings. 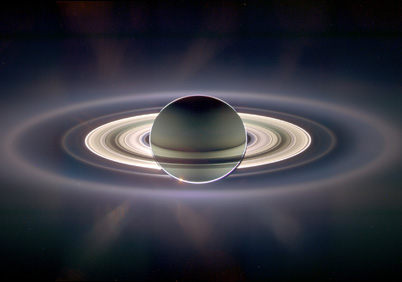 Launched on October 15, 1997, the Cassini-Huygens probe has been instrumental in unlocking many secrets involving Saturn and its moons. Since reaching Saturn, Cassini-Huygens has discovered that Titan’s surface features is likely influenced by weather patterns in Titan’s atmosphere and Titan has seasonal rainfalls, that there are ripples in Saturn’s rings that may be caused by collisions, and the moon Enceladus’s south pole is putting out more heat than previously thought. Cassini has also taken several spectacular pictures of Saturn. The Cassini probe is expected to operate until 2017.