You would think that it would be normal for employees to want to take their afternoon break to go out and see the solar eclipse even if they couldn’t take the entire day off. It’s a once-in-a-lifetime spectacle, especially if one is lucky enough to be in the path of totality. So what if a waitress working the outdoor dining area takes a moment out of pouring refills to admire the total eclipse and an accountant takes a moment out of creating financial reports to go outside and take a peek, right? If the manager is smart, he’ll probably be right out there watching the solar eclipse right alongside his employees.

However, NBC is trying to make this out to be a negative thing by saying that the eclipse could cost the economy $694 million in lost productivity, as if that time couldn’t be accounted for just from the breaks that employers are legally required to give their employees anyway.

Most state labor departments require that employers give their full-time employees two 10- to 15-minute “whatever” breaks and a half hour lunch break every workday. That’s time that’s going to be lost from a productivity standpoint anyway. So it should be considered no big deal if employees want to put off their lunch break until a few minutes before totality and take their lunches out to a nearby picnic table.

If an employee wants to take longer to set up special viewing equipment or a specialized telescope, that employee could conceivably take a personal day off. On the one hand, this could cause some inconvenience for small firms with a relatively small payroll. I experienced the kind of disruption this could cause while I was working in a mail room a few years back and the other person working in that particular mail room didn’t show up one Monday because she mistakingly thought that it was a national holiday. On the other, larger firms and ones that are organized in such a way that employees can back one another up when necessary may be better able to absorb the idea of several of their employees wanting to take the day off to view the solar eclipse. Some businesses and franchises do seem to understand the situation and hopefully some customers will be understanding for about three minutes too, if one goes by this notice that was posted on the door of one McDonald’s location: 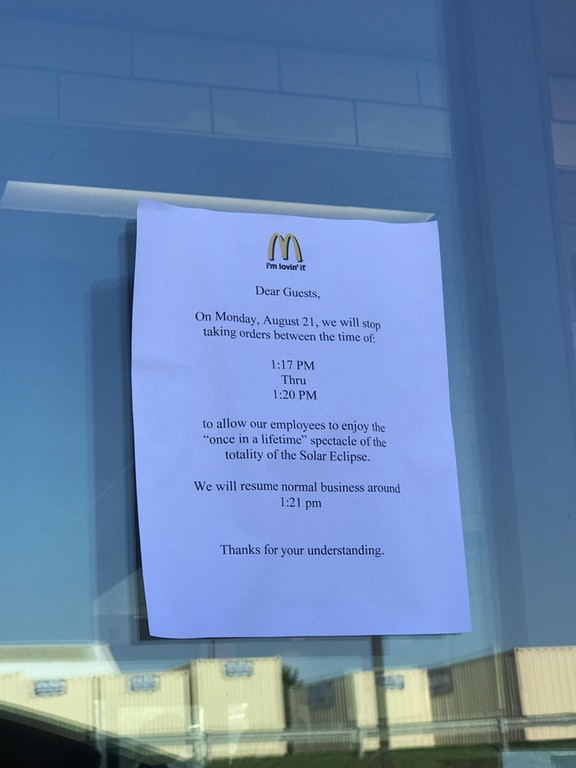 The outplacement firm known as Challenger, Gray & Christmas, which created the report that the NBC story is based on, was less quick to make this out to be any kind of negative thing or even much of a surprise. From a macroeconomic perspective, this momentary loss in productivity is a drop in the bucket. Annual events such as the Super Bowl, March Madness, and Cyber Monday have a larger impact just by being a distracting influence on employees. So why all the focus on the productivity loss caused by one relatively rare solar eclipse?

So if you are a business owner or manager, there’s no shame in giving your employees a slightly longer break for the solar eclipse. The cost won’t be that high. It’s not like they’re using company time and resources to create fantasy sports league teams or score some good deals on Cyber Monday. And you might score some PR points by snapping some good solar eclipse pictures during totality and posting them on your Facebook page too.