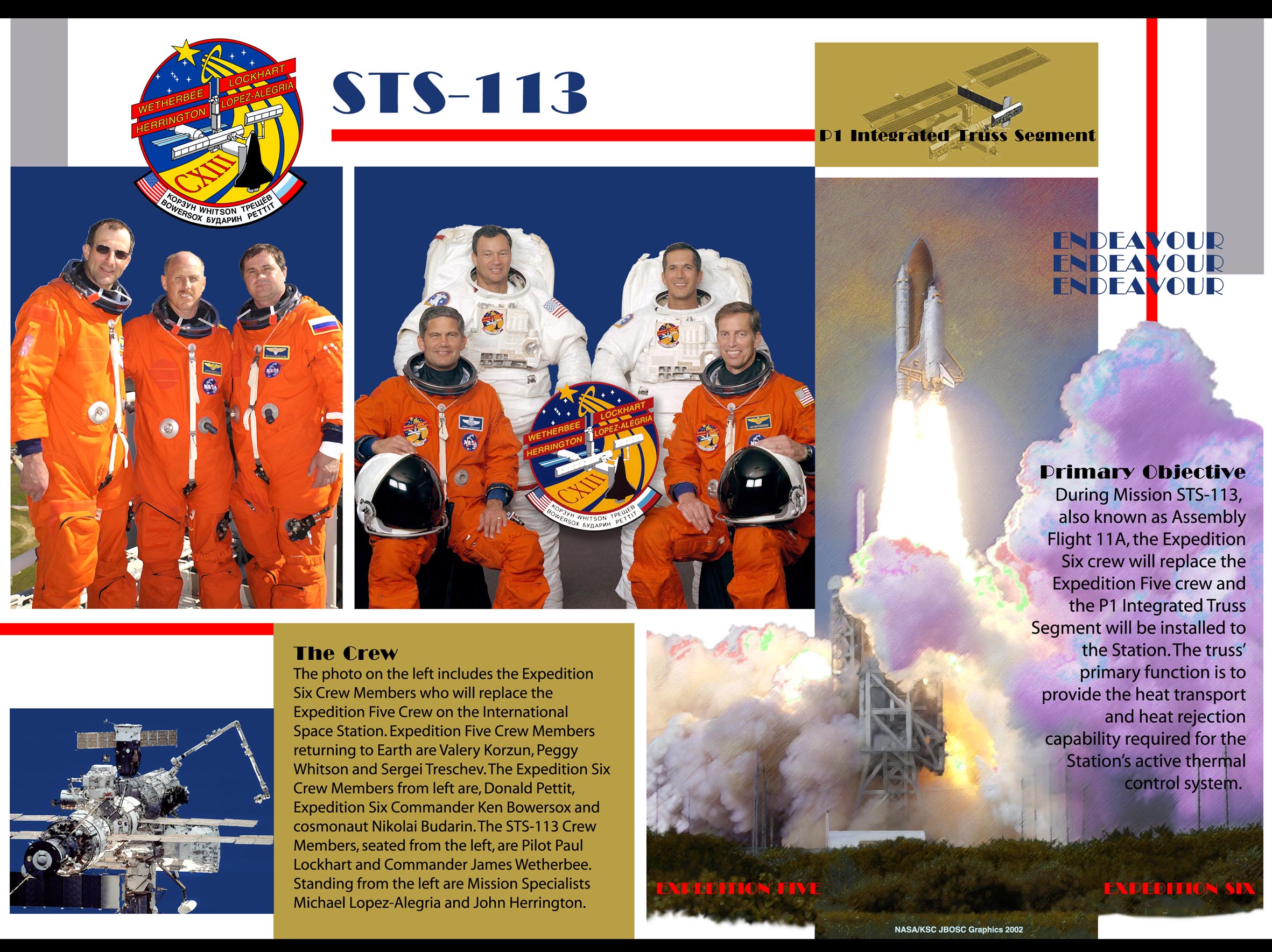 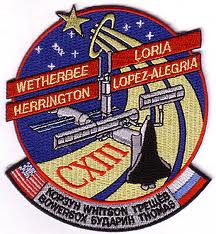 Endeavour rendezvoused with the International Space Station on November 25, 2002. As they inched in for docking with Destiny, Peggy Whitson teased, “You guys fly that like you stole it.” Endeavour was delivering the Expedition 6 crew of Station Commander Ken Bowersox and Flight Engineers Donald Pettit and Nikolai Budarin, along with the Port-1 (P-1) Truss. The two Expedition crews exchanged their seats between the Soyuz and Endeavour and made preparations for the handover. Officially, once the Expedition 6 crew confirmed that they were ready to head home on the Soyuz if they had to evacuate the International Space Station, they could take charge. Unofficially, as Bowersox put it, “[I]f you talk to the guys who are there now, as soon as we show up, they’re going home … and our job is to figure out how to get back.” They couldn’t know at the time that “getting back” would become more complicated than they planned on. 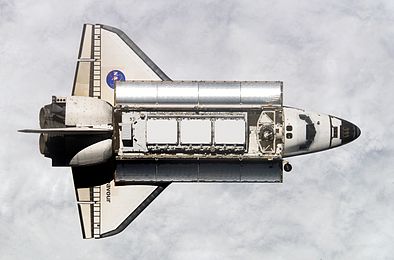 On November 26, Shuttle Commander James Wetherbee used Endeavour’s RMS to lift the P-1 truss segment from the shuttle’s cargo bay. He maneuvered it over to the waiting Canadarm2 operated by Whitson and Bowersox. They completed the handover and Canadarm2 transferred the P-1 segment to its new home on port side of the S-0 ITS. Motorized bolts were activated to hold the new truss segment in place. 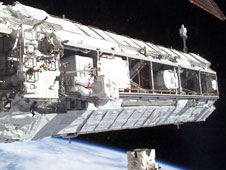 Later that day, Mission Specialists John Herrington and Michael Lopez-Alegria began their first EVA half an hour early. Herrington was the first Native American astronaut making his first and only spaceflight. He took a moment to enjoy the view as they made their egress through the Quest airlock: “The view is phenomenal, just fabulous. Life is good.” They connected electrical cables on the P-1 truss and also installed SPDs to prevent pressure buildup in the pipes. They also released locks on a second Crew Equipment and Translation Cart for the Mobile Transporter, removed drag links that had been used to support the truss during launch and secured them to the framework. Harrington refreshed his oxygen supply in Quest, and then he and Lopez-Alegria installed an antenna for the wireless video system called the External Tranceiver Assembly on Unity. This would allow controllers to see what the astonauts were seeing on a spacewalk without relying on equipment from a visiting shuttle. As they went back through the airlock, Mission Control congratulated them on a job well done.

November 27 was a busy day filled with crew briefings, cargo transfers, preparations for the second EVA and maintenance on the Carbon Dioxide Removal system on Destiny. November 28 was Thanksgiving Day in America and also marked another full day for the astronauts. The highlight of the day was the second EVA, which Herrington and Lopez-Alegria began 45 minutes early. They hooked up fluid jumpers to connect P-1’s ammonia lines to the main system, removed the starboard and port keel pins that had been part of the launch support system and put them in permanent storage, moved the second Crew Equipment and Translation Cart to its permanent storage point on the S-1 segment and secured it in place beside the first one, and installed a second antenna for the Wireless External Transceiver Assembly. NASA Space Station program manager Bill Gerstenmaier commented in an interview that the spacewalkers made it look easier than it really was. At the end of the day, the combined crews enjoyed a holiday dinner brought up by Endeavour.

Work on November 29 included swapping out the Protein Crystal Growth – Single Locker Thermal Enclosure System Unit 7 for the new Unit 10 brought up by Endeavour. The Plant Generic Bio-processing Apparatus was also transferred to its new home in the Destiny module. Whitson and Pettit did some troubleshooting on the malfunctioning Microgravity Science Glovebox. In the afternoon, the two Expedition crews held a ceremony to hand over command to the Expedition 6 crew. 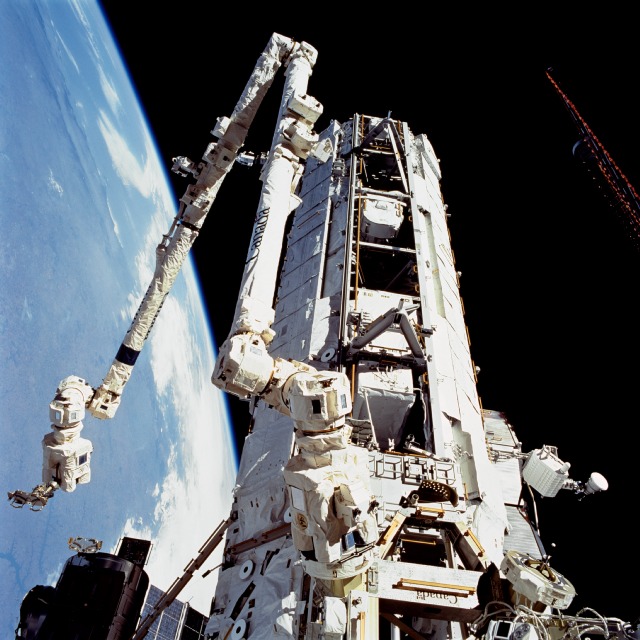 The Canadarm2 gets hung up for the first time ever. Image credit Astrosurf

The third EVA of the mission got off with a literal snag on November 30. Whitson and Bowersox tried to transfer Canadarm2 from Destiny to the Mobile Transporter by having its free end grasp the MT. It stopped just three meters from the transfer point. Herrington and Lopez-Alegria went through the Quest airlock and promptly made their way to the MT to search fro a cause. A UHF antenna had gotten tangled up on one of the MT’s umbilicals. Herrington untangled and deployed the antenna. Controllers on the ground reshuffled the plan for the EVA and the astronauts were confident that they could complete their job without help from Canadarm2. They installed 33 SPDs, connected the Ammonia Tank Assembly umbilicals and reconfigured a circuit breaker on the Main Bus Switching Unit. They reconfigured the Squib Firing Unit on a radiator on the P-1 truss segment. Their EVA lasted 7 hours.

December 1 was the last day of joint operations. With only a few briefings between the Expedition crews and a boost in the station’s orbit using Endeavour’s engines to go, the astronauts spent a lot of the day relaxing. On December 2, the crews said their farewells and Expedition 5 commander Valeri Korzun expressed his confidence that each Expedition crew would continue to improve on the last crew’s work. The Endeavour undocked the same day and landed on December 7. It was the last Space Shuttle construction visit to the International Space Station for three years. 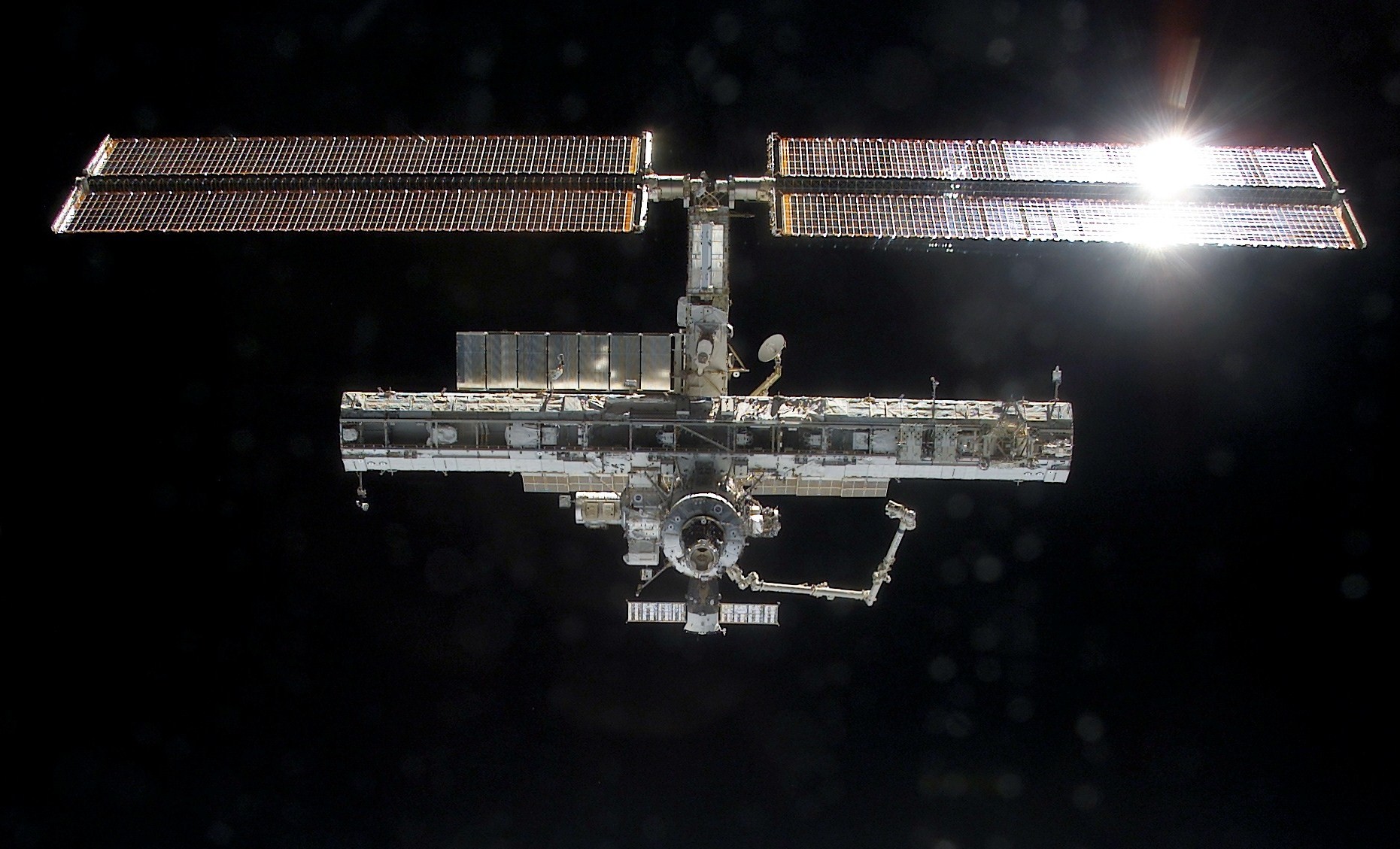