Do you get tired of the same old thing in your science fiction? If that hot new series isn’t centered around a space war, they’ve got futuristic vampires. You’d think they would come up with something original. The usual excuse is that the big publishing and media companies want a formula that’s proven to be commercially viable. Which is one reason why I like independent publishing. The authors don’t have to deal with the rejection letters or follow a formula. They can just get their book out there and the readers can decide for themselves whether it’s good or bad. But I digress. If you get sick of some of the formulaic newfangled stuff, there’s always the classics like the ones on this list.

As always when there’s a movie coming out, I recommend reading the book first so you can use your imagination. The book is usually better anyway. Ender Wiggins is drafted at a very young age into the Battle School and made into a military genius. As a kid in an adult world, he learns quickly to deal with being singled out from his peers and leads the Dragon Army to repeated Battle Room victories with the odds stacked against him. However, the strain takes its emotional tool and his handlers aren’t sure if he’ll be ready for the ultimate challenge in a “war” that he believes to be simulated. Meanwhile, Ender’s brother, Peter, concocts a plan to dominate the geopolitical landscape with sister Valentine as a reluctant ally. Its military themes have made it recommended reading in the U.S. Marine Corps and critical responses have questioned Ender’s motivation for violence. Is killing ever justified, even in self-defense or you don’t realize you’re doing it?

The Ultimate Hitchhiker’s Guide to the Galaxy

Douglas Adams tackles philosophy and politics in a usually humorous way. What is the meaning of life? Forty-two. What is the main duty of the President of the Galaxy? Distract attention away from the people with real power (and Zaphrod Beezlebub does that very well along with proving that two heads are not necessarily better than one). When the Vogons destroy Earth to make way for a space superhighway, Arthur gets an assist from Ford Prefect, hitches a ride on the Vogon spacecraft and now must learn how to get by on forty Alterian dollars a day. Along the way, he learns that Earth was actually an artificial construct designed to invent the Ultimate Question to the Ultimate Answer of “Life, the Universe and Everything.” As with a lot of series, the first book in the Hitchhiker’s series is the best one and the writing quality kind of tapers off after that. Don’t let that stop you from laughing at either Douglas Adams’ initial cleverness or the lousy writing of the later books.

The name comes from the temperature at which paper will burn. In a futuristic society that favors cheap entertainment more than new ideas, firemen are employed to burn any books found along with the homes they are found in. Most firemen enjoy their jobs and actually believe that they are performing a public service. However, one man begins to have second thoughts about his job. When he saves a book from being burned, he begins to turn away from his old habits and old humdrum life that includes a wife who has become emotionally dead to the world and more worried about the mess on her carpet than her husband getting sick. Over the course of the story, he loses everything that mean anything to him in his old life. He discovers that war is imminent and his current, indifferent society is doomed. After his city is destroyed, he teams up with some rogue intellectuals who plan on rebuilding a thriving society based on ideas. 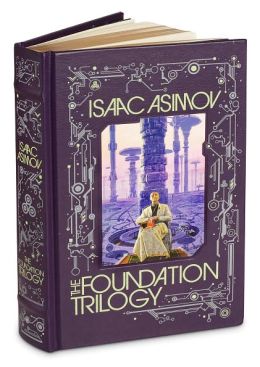 While developing the mathematics of psychohistory, Hari Seldon discovers that the Empire is dying. Backed by a seemingly immortal figure from the dawn of humanity’s colonization of space, he gathers the brightest minds in the Galactic Empire to revitalize civilization. His Plan sends the Foundation to the outer edges of the galaxy and on a path that will rebuild the Empire in a thousand years. Because the Foundation does not possess military might, it must use socio-economic forces to solve a series of Crises over its centuries-long power building. However, Seldon’s Plan has its weaknesses, one of which is that it calculated only for members of the human species. Can it survive challenges from people who are not quite human? And where does the mysterious Second Foundation fit into the picture?

A cautionary tale for anyone who believes they can defy the laws of nature, Frankenstein is the story of a rogue scientist who thinks he can bring the dead back to life. He discovers to his detriment that he’s not as clever as he thinks he is and his assistant, though not exactly the clichéd comical bumbler, mistakenly “harvests” the brain of a serial killer from a cemetery. The thing he has created is not a thing of beauty, but still looks like an animated dead creature. Fleeing his creation, he finds himself pursued and members of his family murdered. The monster catches up with his creator and insists that his creator make a mate for him, promising to find an isolated region to settle in. The scientist begins the process, but proves that he can learn from mistakes and destroys the female. He vows to kill the creature before anyone else can be murdered and the pursuit takes him into the Arctic Circle. When the monster kills his creator, he realized at the end that his vengeance has not brought him peace, but only increased his isolation.

The novel begins far in the past, when an alien monolith sparks both true intelligence and the advent of war among primitive ape-man tribes. Now well into the Space Age, a scientist on an established lunar base discovers a black slab with proportions that cannot possibly be natural. When uncovered, it sends a signal to one of Saturn’s moons. Taking that as a sign that an advanced civilization has visited Earth at some point in the past, Terran civilizations build Discovery One in a mission to hopefully contact this unknown civilization. Unfortunately, in their rush, they let a glitch in the computer called “HAL 9000” pass through quality control mechanisms. At first, it manifests itself only as a series of malfunctions. When threatened with disconnection, HAL begins killing the crew. With Discovery One compromised and HAL now disconnected, the remaining crew member faces no prospect of either rescue or return to Earth. As he approaches Saturn, he braces for the inevitable and winds up as part of the potential next stage in human evolution.

In another tale about the ethics of science, a mouse is made into a genius that can solve mazes for the enjoyment of it instead of a piece of cheese. With this success, the scientific team recruits Charlie Gordon to undergo a similar procedure. The tale is told using Charlie Gordon’s progress reports, in which he is initially presented as a person of low IQ who can barely spell and often made the butt of cruel jokes by the employees of the bakery he works at and shows his progress as the procedure begins to take hold. However, his emotional maturity does not change and, like many scientific experiments, this one has unintended consequences. It is a good look at the treatment of people who aren’t blessed with any great intelligence and, thus, are forced into marginalized roles targeted by bullies looking for an easy target. There is also an ethical slant: Should people be recruited by scientific researchers looking for research subjects when they cannot fully understand what they are being recruited for?

Do we have the right to tamper with the natural evolution of other worlds when we can barely manage our own? Some call it our destiny while others say that doing so amounts to putting ourselves in God’s place. Doing so will have many obvious benefits for humankind while others put Mars’ natural environment or their own greed above humanity’s future. Not even the crew of the first colony ship, naturally an international effort with Russia and America being the major partners, agrees on whether Mars should be terraformed. Geopolitics from back home intervene with corporate fat cats vying for control of the Martian colony. However, the colonists exact a price tag from the corporatists with revolts that lead to “Martian ingenuity” leading the way for colonization of the solar system and beyond.

When the Argus Project, led by Ellie Arroway, receives a communication from an advanced alien race with instructions for building a spacecraft, it sparks the usual international diplomatic wrangling while the nations of Earth decide exactly what to do with it. They decide to work together to build the spacecraft and select an international team of astronauts that includes Ellie to contact the aliens. The spacecraft passes through an intergalactic “subway system” consisting of wormholes and make contact with aliens capable of disguising themselves as people significant to each person. When they return, hours later from their perspective, they find that only seconds have passed on Earth and all their video has been wiped. Unable to convince anyone else without proof, the crew disperses with only their memories and Ellie begins work on a number that the aliens have suggested has significance in the fundamental fabric of the universe (it’s not 42).

Journey to the Center of the Earth

Now scientifically outdated, this novel deals with a German professor who discovers a hidden message in an old Icelandic manuscript. In a move unusual for professors and completely against the common sense spouted by his considerably less adventurous nephew, he decides to take a field trip to the center of the Earth along with his nephew and a guide. The small group encounters underground hazards that include an assortment of prehistorical animals and a giant ape-man that, in a rare moment of sanity, they decide not to bother. They get thoroughly lost, partly due to a compass gone haywire, and survive a volcanic eruption that lands them in Italy. Scientifically inclined readers can point out several places where the scientific views of the day were later proven incorrect and the tale would be considered closer to fantasy in the modern era, but it’s still an enjoyable read if you’re interested in the evolution of science fiction.