Has a news headline ever left you scratching your head? You’re not alone. The news is full of funny, strange and, yes, somewhat sad events. So, if you’re out looking for a headline to make you laugh, forget “The Onion” and just browse your local newspaper to see some funny news articles that have the advantage of being true. 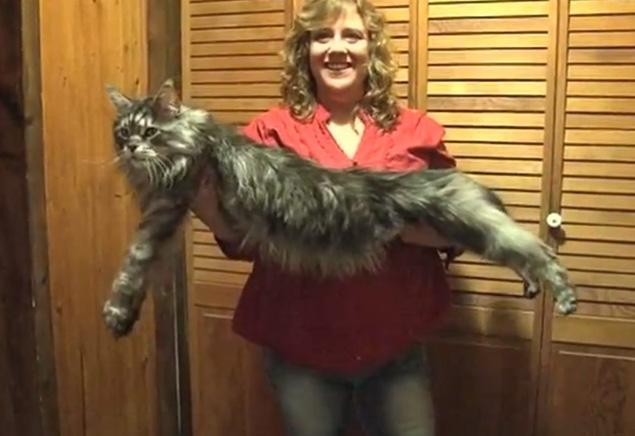 Maine Coons are known for being a lengthy cat. Stewie topped them all by achieving a “Guinness Book of World Records” entry for the World’s Longest Cat before his unfortunate death of cancer in early 2013. Measuring 48.5 inches, Stewie could almost reach to his kitchen’s countertop when he stood on his hind legs.

How do you play baseball in outer space?

A Japanese astronaut named Satoshi Furukawa demonstrates how to play baseball in orbit.

Need state-run health care? Rob a bank. That’s what James Verone did. He handed a teller a note saying, “This is a bank robbery. Please give me only $1.” His reason: He had health issues but no health insurance, and thought he could get free health care if he went to prison. The downside: He is charged with larceny, not bank robbery, so he might not get the three years in prison he hopes for. 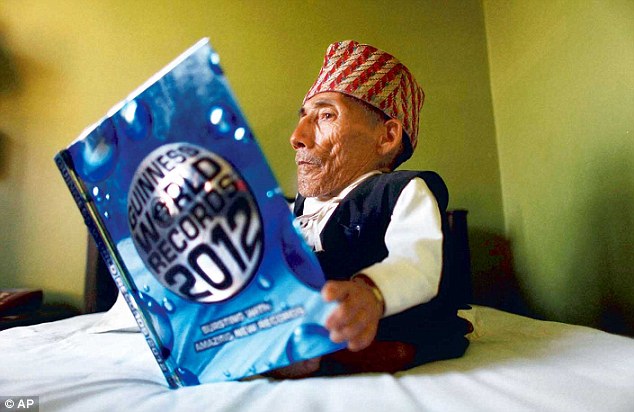 The Guiness Book of World Records has named a new World’s Shortest Man, Edward Nino Hernandez, who stands at 70.21 centimeters (2 ft 3.46 in) tall. He works in the family business, which makes pajamas, and enjoys dancing to salsa and raggaeton music. “I am very happy to be recognized as the shortest man in the world,” Hernandez told the Guinness World Records website. “Every person is different and unique. The more unusual you are the more you should fight and work harder.”

Mass. Woman’s Message In Bottle Turns Up In France

Every year, Ann Hernandez used to throw messages in a bottle into the ocean on her birthday, asking the finder to send a card to her home in Illinois. Her 2003 message was found on the coast of France, 3,000 miles away, by Michel and Daniele Onesime while they were fishing. The Onesimes tried to send the card, only to find out Hernandez had passed away the previous year.

A 7-11 worker was reported to the Humane Society for keeping her dog in the cooler while she worked. According to the customer who reported her, she spotted the miserable-looking American Eskimo “on ice” during a milk run and, when she returned hours later, the dog was still there. As it turns out, the dog’s owner thought that, since it was an Eskimo, it needed to be kept in very cold surroundings.

Some of these will surprise you…I can see hockey pucks occasionally thrown around, but a trash can?? It gets stranger!

…Or at least weird. In a clever attempt to disguise himself, a man wrapped his head in toilet paper and robbed a convenience store in Nebraska. According to the police, he was armed with a knife. No one was injured.

The headlines are by me. The stories are real. 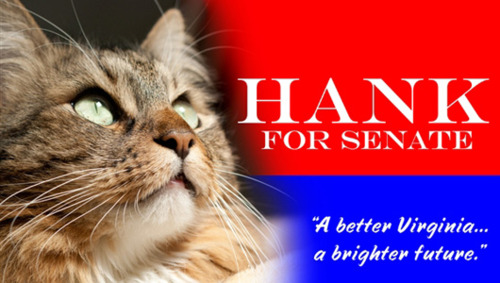 Would a cat make a better senator than most humans? Virginians got to decide in the 2012 election. Image credit Tumblr

If you live in Virginia, you might have noticed that one candidate was a little different from the rest during the 2012 election. He was a cat named Hank, an independent who supports spaying and neutering pets to help cut down on the unwanted pet population. He also supports job creation for Virginians so they can afford food and vet bills for their furry friends. As a survivor of the streets and recent adoptee, he understands what it is like to be homeless and hopes to raise awareness for pets who need a loving family of their own.

It Really Is Best To Be Prepared.

On the University of Florida’s web page, you will find disaster preparedness plans for hurricanes, pandemics…and zombies. According to the zombie preparedness plan, signs of an attack of “flesh-eating, apparently life-impaired individuals” include “documentation of lots of strange moaning.” The University of Florida apparently wants you to be prepared for any disaster, including a Night of the Zombies, however unexpected it might seem.

These are real tax deductions that people claimed, and either the IRS accepted it or tax court forced them to. Please note that this is not meant to be tax advice. That sun deck you added may not be tax deductible.

You can go all-out to win the neighborhood Christmas decoration contest this year. Or you can just do what the person in this video did.

Chinese Dwarfs Start Their Own Village

Sick of being discriminated against, a community of 120 people under 4 feet, 3 inches tall have started their own village. With no big people in Kunming, China, the dwarfs can do everything for themselves and have their own police force and fire department. They have also turned their village into a tourist attraction by building mushroom-shaped houses and dressing like fairy-tale characters.

This one was just too cute to pass up. 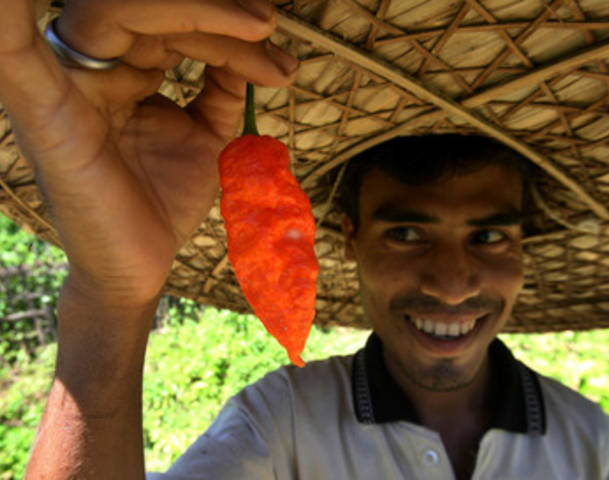 Do NOT eat this plain. You have been warned. Image credit AllVoices

The latest weapon in the war against terrorism has more than 1,000,000 Scoville units, the scientific measurement for a food’s spiciness. What is it? The world’s hottest chili! Known as ghost chili, the Indian military has used it to design non-lethal chili grenades for use in smoking terrorists out of their hideouts. “The chili grenade has been found fit for use after trials in Indian defense laboratories, a fact confirmed by scientists at the Defense Research and Development Organization,” Col. R. Kalia, a defense spokesman in the northeastern state of Assam, told The Associated Press. Traditional uses for ghost chili include a cure for stomach troubles and a way to fight the crippling summer heat.