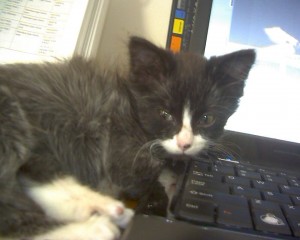 Rudy as a half grown kitten. He still likes my keyboard.

Almost three years ago now, we got a call from a neighbor who had a litter of orphaned kittens. A skunk had gotten into the barn and she wanted to know if it would be all right if she brought two of them down to our place pronto. We’d already agreed to take them on when they were ready and she would have preferred to wait a little longer, but didn’t want to risk it with a skunk around. Within 15 minutes, my sister and I were bottle-feeding two little black and white kittens, a boy and a girl. 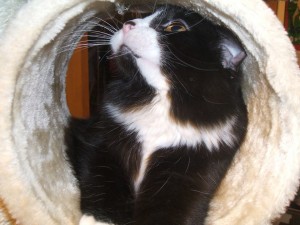 Rudy playing on his cat tower.

We lost the girl a couple of weeks later, probably from internal parasites. Of course I wasn’t happy about it, but the neighbor had done the best she could considering that they were orphans. The boy lived through the kitten equivalent of the “terrible twos” where he was attacking anything that moved. Learning how to take the stairs involved a few wipeouts that he seemed to mostly take in stride. He also survived a case of ringworm and a move across multiple states to Florida. (He did hide under a box most of the way down.) Now he’s almost three years old.

His name is Rudy, though I often call him “Dude,” “Buddy,” and sometimes even “Fuzzbutt” when he’s being ornery. His manners have improved in that department now that he’s an adult cat. Most of the time these days, he’ll tap my arm with a paw rather than bite when he wants attention. He still hates it when I have to ignore him, like when I’m doing an interview for my Youtube channel, but the worst he usually does is try to jump up on the keyboard. If you don’t see my hands very much in those videos, I may have been dealing with a little Fuzzbutt as discreetly as possible.

Rudy’s favorite treat. If your cat likes them as much as mine does, make sure you keep them where he can’t get into it. And remember, cats can climb.

Not that he’s a little Fuzzbutt all the time. At the moment, he’s just zonked out on my bed after a little bit of fur brushing. I do spoil Rudy, not that it’s very hard when his favorite toys are twist ties and one of those “stuffed toy mouse at the end of a fishing pole” toys. He loves most varieties of Greenies except for the awkwardly shaped dental care kind and I have caught him trying to get into the bag of treats a few times. I’ll even let him sleep on my bed with me most nights, especially when it gets cold – and, yes, January can get cold even in Florida.

Most importantly, the squeaking little ball of fur that was handed to me because a skunk got into a barn grew into a reliable companion when I’m not feeling particularly social. For all that he still wants attention from his “Mom” at regular intervals, Rudy isn’t that much different from most cats who can sleep for more than 15 hours a day and watch birds through a window. This is a quality that makes cats popular pets with freelancers like me who do most of our work at home. Rudy might be a little pistol at times, but at least I can get work done while he’s sacked out by the swimming pool and then call him over for a treat when I’m done. Anyway, there’s just something about having a little cat curled up at my feet when I’m sleeping that kinda makes the Fuzzbutt moments worth it.

Thanks to Marianne Ahlmann of Personal Capital for emailing me this highly informative infographic.

Cats like Rudy are not high-maintenance pets, but those Greenies do cost money! That’s why I’m happy he likes to play with twist ties. That means if you want to get a cat or a dog, you should plan ahead to make sure you’re financially ready for the extra expense and adopt from an animal shelter because they’re usually up to date on their shots and already spayed or neutered. This saves you a little bit on trips to the vet and eliminates the risk of an unexpected litter of kittens or puppies.

As you can see from this infographic, spending on pets is expected to top $60 billion in 2016 and annual expenses for a cat can go up to $940 based on the cat’s needs and how much the household is willing to spend. While that is less than some households spend on dogs, I like to ask my vet about any new product I’m trying and look around for a good deal. Sometimes I’ll even browse the charity listings at eBay Giving Works, which donates at least 10% of the sale price of each listing to a wide variety of charities, including some that support animal causes. So basically, I don’t skimp when it comes to buying stuff for Rudy, but I try to shop smart to make sure he gets the best stuff for the money.

It’s something to be aware of if you are considering getting a cat or a dog. Some pets are dumped simply because the owners didn’t do their research and weren’t ready for the financial responsibility. Of course, that’s unfair to the pet and that’s how you might see the occasional video like this one, in which a cat named Pickles went above and beyond to get somebody’s attention so he could get adopted.

Cute, right? However, you should plan ahead to make sure you’re not the one who is returning a pet to the shelter because you didn’t plan ahead. So please make sure you’re ready for it and, if you have kids, make sure they’re ready to handle having a pet around too. You’ll be doing yourself and the pet a favor.