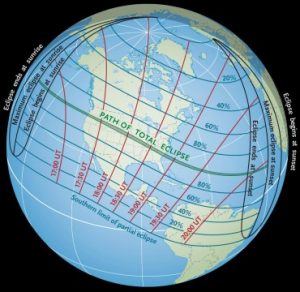 Globe showing the path of the solar eclipse and the percentage of obscuration that each region in North America is likely to see. Image credit Sky and Telescope

The astronomy community is abuzz about the solar eclipse that will occur on August 21, 2017. Most of North America will be able to spot a partial solar eclipse if they do their observing at the right time. Those who reside within a 65-mile-wide track that stretches from Oregon to South Carolina or do some advance planning to be within this zone on August 21 could observe a total solar eclipse that will last for up to 2 minutes 42 seconds. This is the first time that a partial or total solar eclipse will be visible across most of North America on the same day since 1918. Local astronomy clubs, schools and professional astronomers are already gearing up for this event, and so are the hospitality and travel industries. In fact, some hotels along the track that will witness a total solar eclipse are already booked to the gills and many others are boosting their prices. For this reason, the event is sometimes being called the Great North American Eclipse.

Some Tips For Observing This Eclipse

The most important thing is to relax and have fun while observing the solar eclipse, and especially do it in a way that won’t burn out your eyes. The Great American Solar Eclipse is on August 21st, so you still have time to plan. Just don’t procrastinate, because top destinations for observing the total eclipse is going to be booked fast.

NASA Weighs In on Watching The Eclipse