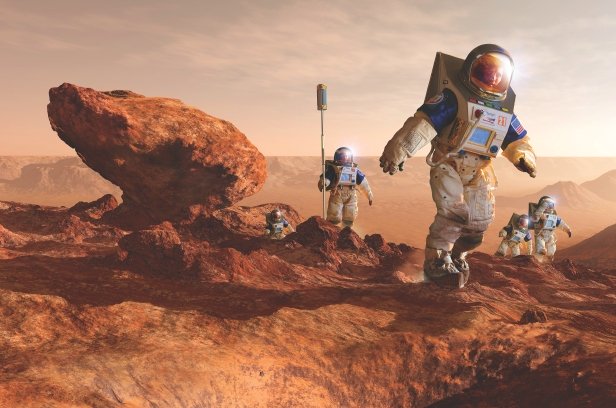 Robert Zubrin on Why We Should Go To Mars

This is one I hear a lot. Why explore Mars when we could be helping people who live in deserts with limited access to fresh water? My classy retort was essentially, “Look it it this way: The same water extraction technology they’re developing for manned Mars missions will also be useful for dry regions on Earth. And this is coming from somebody who supports charity: water.” That’s right; exploring Mars and helping people here on Earth does not need to be an either/or proposition.

There are some line items in the U.S. federal budget I wouldn’t mind trimming if it was up to me. This fiscal year’s military budget is $768 billion. You could do a creditable job of putting a manned scientific base on Mars for that kind of money and the 15 or 20 years it would take can make it look more palatable to taxpayers. Besides providing jobs for engineers, technicians and scientists, we could be exploring the kind of technology it takes to be self-sufficient in an environment that’s more hostile than the Antarctic. That kind of technology could improve the lives of the less fortunate in regions that aren’t very friendly.

I prefer to see people become self-sufficient in the same way that Martians would have to be, too. I don’t mind donating the occasional bag of food to a food bank, but I want to see more vegetable gardens in people’s yards. I want people to have easy access to clean water without having no choice but to buy it from Nestle. That way, it becomes a hand up and not a hand out.

This may take a little bit of a rethink of our way of doing things. I’ve made no secret of the fact that I was a Mars One candidate. Possible emphasis on “was” even though I’ve toyed with the idea of reapplying. Would I have signed up for a one-way trip to Mars if I didn’t believe in the idea of sending humans to Mars, despite the obvious risks? Probably not. I still think it would be awesome if I could be involved in Martian exploration in some way. However, for some people, justifying one or more manned missions to Mars requires more than just, “It’s plain friggin’ cool.” So, what are some practical justifications for sending people to Mars?

How often do you worry about a robot taking your job? Probably not often if your job involves being creative in some way. A robot could probably take every cliched plot point and turn it into a moderately entertaining science fiction action movie, but it’s not going to write an original novel like “The Martian.” If your job involves the ability to entertain an original thought, you’ll probably be retired by the time a robot capable of doing that job is being showcased at a top technology expo somewhere.

The Martian: A stranded survivor on the Red Planet. Cleverness and science are on his side, but is the NASA bureaucracy?

However, that does not mean that jobs won’t be displaced by advances in technology that make work more efficient. It has happened before and one common example involved the agriculture industry. Those three farm hands in “The Wizard of Oz” would have a hard time finding a job today because tractors are now doing most of their work. Fortunately for them, they would have had time to retrain for other jobs by the time it became an issue. What kind of replacement jobs are available today now that the automation of so many fast food jobs is rapidly becoming an issue? As importantly, would these replacement jobs provide a sense of fulfillment to the ones filling them, or would they be stupid make-work jobs that are as emotionally and intellectually deadening as the ones they replace?

Space exploration efforts create jobs, but only if related projects can get the cash flow. Imagine having to write a lot of pink slips because your NASA project got cancelled due to lack of funding. Former project managers will tell you that it’s not a good feeling because they know that every job that NASA and its contractors provide means one breadwinner with a family who isn’t collecting welfare benefits.

As importantly, space exploration efforts create meaningful jobs. Legend has it that President Kennedy was touring a NASA facility when he happened to spot a janitor intently scrubbing the floor. Kennedy asked the janitor, “What are you doing?” The janitor answered, “I am helping America land on the Moon!” For that janitor, his position meant more than just a meaningless make-work job and a paycheck even though it probably wasn’t exactly the best paying job at NASA. He was making a contribution toward a goal that he knew was bigger than himself by helping to maintain an environment where engineers and astronauts could focus on their work.

Growing Up As A Species

How often have you looked back at some event in your life and said to yourself, “Boy, was I ever stupid?” The human species is that way, too, when we look back at events from centuries ago and realize the foolishness that seemed normal and sometimes even desirable to our ancestors at the time. It’s a normal part of growing up as both a person and a sentient species.

This is the point of being able to remember the past. Scientific studies have shown that the human species was so successful partly because we could tell stories about events we faced and survived. If a hunter fought a frightening predator and lived to tell the tale, he’s going to tell his friends what happened and they’ll take away some tricks that could be used to fight that same type of predator in the future. And what of people who refuse to learn the lessons conveyed in these stories? It’s simple. They go out and face the same lion that their brother just fought off and, very likely, they get eaten.

The Evolutionary Value of Storytelling

Our Martian descendants will learn what works and doesn’t work when it comes to living on a hostile planet because they have the stories from the first people who lived and worked there. Very likely, the first Martians’ ten-times-great grandchildren will look back and wonder why we argue about whether we even should go to Mars. Yes, the fatality rate will have been atrocious, but they have the lessons from that experience because they remembered the stories.

Who Are We As A Species?

We evolved on Earth. More specifically, we evolved in Africa and were never designed to live in other climates. This hasn’t stopped us from not only surviving, but also thriving in frigid regions like Alaska and desert regions like the southwestern United States. We can handle these regions because our ancestors tamed fire, learned how to build shelter that could keep the elements off, and created clothing for when we absolutely had to be outside in an unfriendly environment. What makes Mars so different that we need to be afraid of it? No air to breathe and toxins in the regolith, right?

These problems can be solved with careful planning. Even getting stuck out on the Martian planitia at night need not be the end of the line if future Martians plan ahead and especially carry portable sources of heat, oxygen, food and water. This is one thing that makes humans different from most animals. We can foresee obstacles that we might face at some point in the future and plan to be ready to face them. Even considering the learning curve that could turn deadly, we’ll eventually succeed because (this again!) we can tell stories about what worked and what didn’t.

We can succeed at expanding our territory into regions that aren’t all that friendly because we’re clever, intelligent, pioneering humans and learning something new all the time. My earlier comment about water extraction technology didn’t just come out of nowhere. It’s something that can really be used by people who don’t have ready access to open bodies of fresh water regardless of whether they live on Mars or in the middle of a desert on Earth.

You can even extract water in a “wretched hive of scum and villainy!”

So Mars isn’t really something that needs to be an either/or situation. What we learn from living on Mars can be applied to Earth and can even teach us something about what it means to be human by looking the challenge dead in the eye and accepting it. This improves both the quality of life of all people on Earth and our self-esteem as a species by proving that we still have what it takes to make a new environment habitable.