Rocky relationships are not unique to Hollywood. What makes a Hollywood celebrity who has been married four times different from someone like Elon Musk, who married, divorced, married, and divorced Talulah Riley and word on the street is that the divorce from his current wife is now on hiatus? The difference may be that the Hollywood types are dysfunctional for the print space in supermarket-aisle tabloids. There’s a correlation between the size of the audience they can get the attention of and the amount of money they can bring in. People like Elon Musk have a better reason to have the occasional rocky romance. They’re dreaming big and, when you’re really serious about making your big dreams a reality, romance just becomes a low priority.

It can be pretty tough for big picture types to figure out girls. As Elon Musk put it once, “I need to find a girlfriend. That’s why I need to carve out just a little more time. I think maybe even another five to 10 — how much time does a woman want a week? Maybe 10 hours? That’s kind of the minimum? I don’t know.” It’s not really being clueless when he at least acknowledges that a truly meaningful private life takes time away from the busy schedule he must have when he’s responsible for running three companies and “take your girlfriend to work day” is not a thing. Anyway, once you’ve made your first billion, picking up the occasional date should not be a problem. 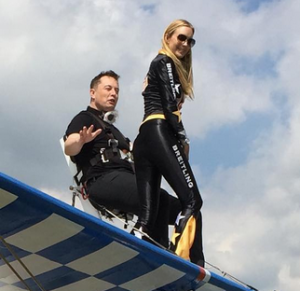 And, sure, he can come off as abrasive to the people who know him. There’s a disputed story in that recent biography that had him reaming an employee for skipping out on a meeting to attend the birth of the employee’s son: “You need to figure out where your priorities are. We’re changing the world and changing history, and you either commit or you don’t.” Musk denies that it ever happened. Maybe he doesn’t remember ever sending an email like that. Maybe the employee fabricated that story in an attempt to justify being a bitter former employee who sees Elon Musk as a tyrannical boss. However, that sounds like someone who is trying to change the world and isn’t going to have a lot of patience with employees who go AWOL. Imagine what being the girlfriend or wife of a visionary like him would be like when he drives his employees almost as hard as he drives himself.

He does know how to have fun. He was spotted wingwalking not that long ago. But, as he learned after a trip to Brazil and South Africa that ended up with him bedridden with malaria, “Vacation will kill you.” So it’s hard to blame him for preferring the long work weeks instead of taking the risk of repeating that experience. That’s going to put a crimp on his social life, let around any kind of romance that your everyday Joe would have.

There are times when I think Elon Musk’s life would be a good movie. There’s the comeback story where he brings Tesla back after a near-bankruptcy, the “Little guy against the heavy hitters” story where he takes on major aerospace companies like the United Launch Alliance and wins, and the pretty standard “Kid survives rough childhood in South Africa, comes to America and becomes a billionaire” story. Somebody ought to talk to Elon Musk’s agent about buying the movie rights for those stories.

However, this isn’t a man who jumped straight out of the fantasy land of Hollywood. This isn’t someone who is going to make tabloid headlines with a sham marriage that falls apart in a month. He’s just not that shallow. Big picture types have completely different romance problems. It’s kinda hard to get a romance going when your idea of small talk is, “Do you ever think about electric cars?” But he does all right for rejecting the Hollywood drama.