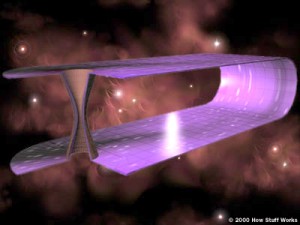 Wormholes could theoretically be used for travel through both space and time. Image credit HowStuffWorks

It’s a common enough scene in science fiction movies. A spaceship is about to activate its warp drive and falls into a wormhole. Somebody discovers a stable wormhole with an alien civilization inside. My favorite? Contact. They build a spacecraft that makes use of a wormhole “transit system.” Have you ever wondered how much people really know about wormholes and their dark cousin, black holes? Most of it is theoretical but there may come a day when somebody encounters a real wormhole and lives to tell the tale.

What is a wormhole? Wormholes are also referred to as “Einstein-Rosen bridges” and are basically shortcuts in spacetime. Matter can fall into one end and be spat out at the other. Destination? That’s tricky. Theorists say that wormholes can connect two distant points in space, two points in time, or even two parallel universes. So if you happen to fall into a wormhole, you can literally end up anywhere, anywhen. You might even spend hours, days or years in another time or place, come back, and find that very little time has passed. Without giving away any spoilers, that makes movies like Contact at least reasonably plausible.

What kind of shape would I be in if I happen to fly a spaceship into a wormhole? No one knows but such an adventure would certainly not be for wimps. Many physicists say that you would be subjected to such violent forces that you simply would not come out in one piece.

What is the connection between wormholes and black holes? Many physicists believe that black holes may actually be part of a connected pair that also includes their opposite, a “white hole.” If something falls into a black hole, it won’t necessarily be crushed by a singularity. Instead, it will be sucked into a wormhole and spat out by the white hole on the other end. The connected pair can be in different universes or on opposite sides of our own universe. No one knows.

What does string theory have to do with wormholes? Theoretically, “superstrings” can be used to construct stable wormholes like the one seen in Star Trek: Deep Space Nine. Don’t count on it being big enough to send a starship through, though. Superstring theory has been called a reasonable theory of everything. It unites gravity with a theory of radiation that can provide a solution to quantum wormholes. Using superstring theory, quantum forces are really vibrations of “strings” that produce weird effects like wormholes, black holes and other exotic structures. These strings can vibrate in 10 dimensions, six of which are too tiny to be detected except by measuring the ripples they produce.

Who discovered wormholes? So far, no one has directly observed a wormhole. Most of them probably open and close too swiftly for even a single photon to pass through. The theory comes from work by Albert Einstein and Nathan Rosen, who worked together in an attempt to eliminate “singularities,” places in physics where values became infinite or the mathematics simply broke down. Earlier work by Karl Scwarzschild demonstrated the existence of a singularity in which mass had been condensed down to a single point of infinite density, whose gravity warped space-time around it. This phenomenon became known as a black hole. In 1935, Einstein and Rosen published a paper that demonstrated how it was possible to draw a shortcut through space-time that connects or bridges two distant points.

Can wormholes become a feasible method for interstellar or intergalactic travel? Not for the foreseeable future. Perhaps our distant descendants will develop the technology needed to construct stable wormholes. For now, the speed of light is the practical speed limit. 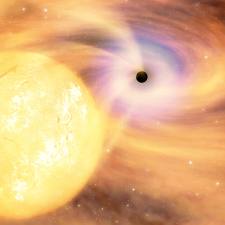 An artistic representation of a black hole sucking matter off a star. Image credit Daily Galaxy.

What is a “black hole”? Black holes are places where gravity is so intense that light cannot escape the intense warping of time and space that black holes produce. Because of this, we can’t see black holes directly. We can only detect them because they looks like, well, black holes and any matter surrounding them move in a manner similar to water running down the drain in a bathtub after a bath.

What is the event horizon? The event horizon is the point past which anything, including light, that falls into it will not escape. It is theoretically possible for light to hover eternally at the boundary, but it has to hit the event horizon at exactly the right angle for this to happen.

Why does matter close to the black hole revolve around it so fast? You might have seen a similar “whirlpool effect” when you let the water out of your bathtub. That water is going to fall into the drain eventually. You might have noticed that water close to the drain seems to move faster than water farther away. Matter around the black hole does the same thing. That’s the black hole’s gravity interacting with the momentum of the matter, pulling the stuff closer to it even as it attempts to move away. If the matter doesn’t move fast enough, it’s going to be sucked past the event horizon and into the black hole eventually.

How do black holes form? Most of the black holes that astronomers can actually detect form when the most massive stars die. A lot of the star’s matter gets blasted off in a supernova and the rest gets sucked in by the gravity of the dying star. It effectively collapses under its own weight into a black hole.

Do all galaxies have a big black hole in the center? Not all, but most of the large galaxies do. These are typically spiral galaxies like our own Milky Way or elliptical galaxies.

Can a black hole swallow Earth? Only if it is close enough and massive enough and, so far, that hasn’t happened.

Can our sun turn into a black hole? No, it’s not massive enough. It’s just an average sized star.

I kid you not, these things are huge enough to be scary. Cosmic Journeys gives you a look at some of the most massive known black holes, including a recently discovered record-holder.