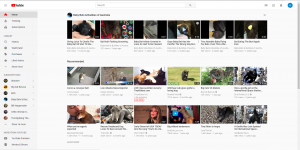 By now, BitConnect being a fraud is considered yesterday’s news. A lot of people posted Youtube videos and blog entries promoting it. A lot of people defended it even as it was in the process of disintegrating. A lot of people were burned by it. BitConnect’s founders are now defending themselves in well-deserved lawsuits.

Now YouTube has been added as a defendant in at least one of these lawsuits. The reason: YouTube could have taken down those videos promoting BitConnect the instant it became obvious to anyone who pays even a little attention to news coming out of the cryptocurrency world that the fraud was beginning to unravel. Does this surprise anyone?

Algorithms and Abuse May Be to Blame

It would be easy to say that we should be “fair” to YouTube. It would take an army of people watching videos all day and all night to keep up with every second of video content that gets posted daily. How much expense should YouTube be expected to take on just to protect idiots cryptocurrency investors who might occasionally make a mistake from fraudsters?

YouTube may have algorithms to get rid of abusive content, but one does wonder exactly how effective those algorithms are when a video on one of NASA’s many official channels got taken down due to a bogus copyright claim. Rational people might say that this is a case for possibly a nominal fine for abusing the DMCA request system and, anyway, maybe YouTube should have some way to verify that NASA TV is definitely legit as an official channel.

That is a fair point. So far, U.S. law does not provide protections against those who misuse the DMCA. Both YouTube and malicious actors who file fake DMCA take-down requests could use the cop-out excuse that it’s not illegal.

However, at the risk of using a cliche, being legal is not the same thing as being morally right. It doesn’t even help YouTube’s case that it will, at most, say “Whoops!” when it mistakenly takes down a video that is both in the public domain and posted by its original creators while, at the same time, fail to take down videos that promote criminal activities such as fraud.

YouTube will say that there’s nothing that can be done about the problem of channel owners using their platform to promote fraud and other criminal activity. It’s easy for abusers to get away with filing a fake DMCA complaint, for YouTube to yank the ability for small channel owners to earn advertising revenue on their videos, and for real criminal activity to run rampant because it means that YouTube employees don’t have to make judgment calls on a case-by-case basis. It’s like nonsensical Zero Tolerance policies in public schools: None of the decision makers care much about which innocent people might be harmed if it means that they don’t have to think about the situation. As the Steve Miller law firm, which is handling the BitConnect lawsuit, said:

“It is not about YouTube being the speaker or publisher of the content on its website. Instead, liability is predicated on YouTube’s failure to act after learning from content directly published on YouTube of the readily foreseeable harm posed by its advertising partners … As the saying goes, sometimes when you lay down with dogs, you get fleas.”

This and similar lawsuits may help to get the attention of YouTube and its parent company, Google, because even in cases that can be settled, lawsuits are not good for the company’s bottom line. The good news for those of you who can’t afford an attorney is that lawsuits are not the only way to hit YouTube’s finances, or at least its status as the biggest mostly-free video platform on the Internet. YouTube and Google don’t want content creators to know this, but there are a few alternatives that video creators can move their video content to if they get sick of YouTube.

If you have a YouTube channel, you should consider alternatives that are less quick to take down videos without at least analyzing the situation first. Vimeo is good for people who still want to be able to embed their videos on their own website. LBRY is decent for people who don’t care about embedding their videos quite as much but want a platform that can’t censor their content.

Whatever you do, you should always have a backup for your videos. I used to know a guy who lost all his videos because some jerk filed a fake DMCA complaint and, believe me, he was pissed because he never thought to make backups.

Until more popular channel owners are willing to move away from large platforms like YouTube, though, lawsuits like the BitConnect case are not only inevitable when YouTube crosses the line, but also one of the few ways to get the attention of media giants’ attention when they have their priorities upside down. They can do better, but like any big corporation, they need incentive to do so and their chief incentive is their bottom line. And it would be nice if the rest of us could provide that incentive before the next BitConnect rolls around.