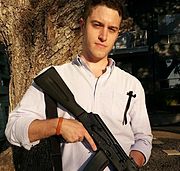 Cody Wilson poses with a gun that may or may not be 3D printed. Image credit Wikipedia

When Cody Wilson published plans for a 3D-printed gun, gun rights advocates cheered and gun control advocates groaned. If anyone can just download free plans for a gun and print it off on a convenient MakerBot, then what is the point of having gun control laws? Predictably, his actions drew attention from the U.S. State Department, who promptly demanded that Wilson take down his plans, citing International Trade in Arms Regulations (ITAR), which forbids the exporting to weapons.

Although Wilson complied, he still feared that the State Department would come after him. “I thought my life was over,” Wilson told a writer for Wired.

Instead of waiting for law enforcement officers to show up, Wilson decided to go on the offensive and file a court case challenging what could have been a misinterpretation of ITAR. He had not actually exported an actual, physical gun. He had simply made plans for the gun available for others who wished to create a gun on their own.

“If code is speech, the constitutional contradictions are evident,” Wilson said when he first launched the lawsuit in 2015. “So what if this code is a gun?”

The Department of Justice offered a settlement two months ago: It would respect what Wilson saw as a matter of free speech rights and Second Amendment rights. It would also change its rules in respect to most guns under .50 caliber and send regulatory responsibilities to the Department of Commerce, which is less likely to crack down on simply having the plans for a gun available online.

The court case approved the settlement, according to available court documents. Now that Wilson can now legally publish plans for 3D guns, he is relaunching his website at Defcad.com and uploading a collection of firearm blueprints provided by his nonprofit organization, Defense Distributed.

The collection ranges from Wilson’s original single-shot gun to AR-15 frames and plans for exotic semi-automatic rifles. All of these plans can be downloaded through an uncensored Internet connection, customized according to individual preferences, and brought to life using a standard 3D printer or computer-controlled milling machine.

“I consider it a truly grand thing,” Wilson said of his legal victory. “It will be an irrevocable part of political life that guns are downloadable, and we helped to do that.”

Not everybody agrees with Wilson’s assessment, of course. Gun control advocates fear that the ability to freely download and create guns at will and with limited government oversight will give people who would normally be barred from obtaining a gun the ability to create their own. Some mass shooters such as the man who went on a shooting spree in Santa Monica, California, in 2015 created their own “assault rifles” like AR-15s.

“This should alarm everyone. We’re passing laws in Connecticut and other states to make sure these weapons of war aren’t getting into the hands of dangerous people. They’re working in the opposite direction,” says Po Murray, chairwoman of Newtown Action Alliance, a Connecticut-focused gun control group created in 2013.

Wilson, however, remains unfazed by gun control advocates like Po Murray now that he has gotten a favorable settlement. He says his goal is not to arm the criminally inclined or harm innocents. He has simply won a victory for the First Amendment and Second Amendment rights of the average gun aficionado who might be inclined to customize his or her own guns without having to jump through bureaucratic hoops.

Anyway, any future talk of gun control will not change the fact that the files are out there. They can be downloaded, sent over the Dark Web, loaded onto a USB flash drive, and shared among friends who may be disinclined to plan a mass shooting, but aren’t very interested in letting the government tell them what to do either.

“All this Parkland stuff, the students, all these dreams of ‘common sense gun reforms’? No. The internet will serve guns, the gun is downloadable.” Wilson says now.