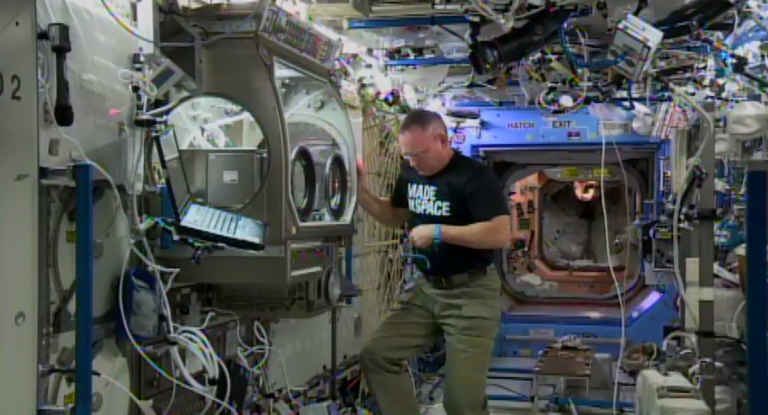 An astronaut works with the 3D printer that was sent to the ISS by Made In Space. With its new partnership with Axiom Space, making things in space by emailing the designs to a space station (as NASA famously did when it had to send a specialized ratcheting socket wrench to the ISS) may contribute to making long duration space missions more commonplace, inexpensive and sustainable. Image credit Forbes

The concept of moving manufacturing and construction capabilities have been around since at least the late 1960s, when the Soviet Union tested welding techniques on Soyuz 6 in 1969. Now two companies named Made In Space and Axiom Space want to make manufacturing in low Earth orbit a reality with a new agreement to cooperate in this arena.

Made In Space is interested in 3D printing technology and its applications in the aerospace industry. In April 2016, Made In Space provided a 3D printer called the Additive Manufacturing Facility (AMF) for the International Space Station. The AMF holds the distinction of being the first 3D printer to produce tools and parts in outer space. Made In Space also has a contract with NASA to 3D print and assemble structures in the vacuum of space using its Archinaut architecture.

These two companies agreed to make use of one another’s capacities to further their goals in the space manufacturing arena. The companies are working together to solve the inherent engineering and technical challenges of manufacturing in space, such as outfitting the orbital factory with equipment, providing utilities, power and thermal management to meet the demands on the factory’s infrastructure, and ensuring that payloads related to the factory maintain their quality as they are delivered to their on-orbit destination.

Made In Space is already pursuing one of the agreed-to tasks by developing a system to produce high-value optical fibers in space, planned to be used aboard Axiom’s station. Technology like this will enable the servicing and expansion of space infrastructure such as satellites and station capabilities.

Senior employees were reportedly enthusiastic about the new partnership. Michael Suffredini, President and CEO of Axiom Space and former ISS Program Manager said of Made In Space:

“Made In Space carries a rich legacy in manufacturing. This partnership marks an important next step in humanity’s reach into space. … In-space manufacturing provides a unique class of products beneficial to the communications, materials and biomedical industries on Earth. Made In Space is an exemplary company to collaborate with to meet the demand for in-space manufacturing, and we are thrilled to build a partnership with the individuals who have proven their abilities in zero-g flights and on ISS.”

Andrew Rush, CEO of Made In Space had this to say:

“Axiom and Made In Space are adding to the space ecosystem, serving a growing market and enabling innovative approaches from processes learned on the International Space Station. This partnership allows us to continue to evolve and develop new products and allow our customers to invest in space manufacturing knowing that there will be an ongoing human presence on orbit. [Axiom is] the ideal partner for manufacturing new technologies in space and leveraging our new capabilities.”

If successful, the new partnership between Made In Space and Axiom Space may call attention to new opportunities for off-world manufacturing that may enable less expensive construction and deployment of space-related infrastructure and hardware and will certainly build on capacities that have already been investigated by worldwide space agencies, including the old Soviet Union space effort and the current work being done on the International Space Station.