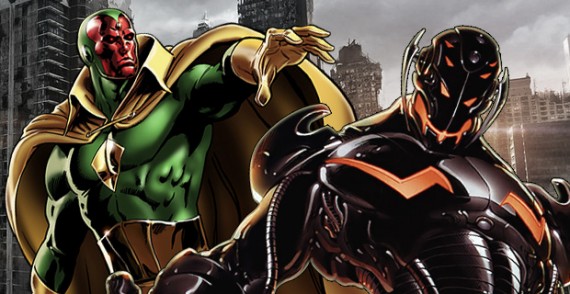 Vision and Ultron from Marvel Comics: Beneficial and malicious AI side by side.

If you’ve watched enough sci-fi action movies, you might be asking yourself, “How real is the threat of AI, anyway? Should we worry about a post-apocalyptic world in which machines rule?” It does sort of depend on who you ask. Movies like Avengers: Age of Ultron may convince audiences that AI can be dangerous to humanity, especially if the people implementing it fail to properly vet it first. If one can ignore Hollywood’s attempt to propagandize against the creation of AI, though, it’s more reasonable to assume that Homo sapiens will have to either compete with or learn how to cooperate with its own creation.

Will Self-Taught, A.I. Powered Robots Be the End of Us?

The well-known technological entrepreneur Elon Musk recently suggested that the human species should consider the possibility of merging with machines in an attempt to keep up with artificial intelligence. “Over time I think we will probably see a closer merger of biological intelligence and digital intelligence,” he said at an event in Dubai at which he was launching Tesla in the United Arab Emirates. He considers enhancing the capacity of the human brain and especially our ability to swiftly upload and download data between digital media and our brains to be especially important for staying relevant in a universe that includes artificial intelligence.

Rethinking our education system also will not be a bad thing. Criticisms of the public school system include too much testing, not enough free play time, too much rote memorization of inert facts, and too little emphasis on creativity, exploration and the natural aptitudes of each individual child. The current mainstream education model was created at a time when most people’s vocations were basically a choice between working on farms and working in factories. These were jobs that did not require a lot of critical thinking or creativity, so these two things got de-emphasized in the school system. However, this means that the modern education system is doing a disservice to modern children who have to get by in a world where there isn’t much demand for full-time farm hands anymore, factories, warehouses and fast food restaurants are increasingly being automated, and most jobs that are available to future adults will require a high capacity for critical thinking, creativity and an interest in continued learning. This will especially be highlighted when AI becomes advanced enough to start taking our jobs too.

In some cases, people aren’t just rethinking the way things are done in the education system. They’re actually doing it. Elon Musk has founded a private school for his employees’ children that emphasizes the idea of “unschooling” – basically, allowing children to have a say in personalizing their education by focusing on what they might be interested in at any given time. Unschooling says that a boy who wants to play trumpet for eight hours a day isn’t necessarily wrong. He’s just a boy who might grow up to be the second chair in the trumpet section of a large professional orchestra.

Opportunities for Careers in Robotics, AI and Machine Learning Are Rising Fast

The Roomba 880: An artificial intelligence that can navigate just about any room and sweep your floor. And not at all scary because this is an example of beneficial AI.

We’re pretty used to thinking of machines as things that serve us. The iRobot Roomba could be regarded as a sort of rudimentary artificial intelligence in the home that can navigate a room without input from a human, yet we just think of it as something that sweeps the floor. The makers of the Roomba recognize the importance of preparing young people for a world in which robotics and AI will become a growing part of our daily lives and have partnered with Congress to sponsor National Robotics Week, which will take place on April 8-16 this year.

The organizers are currently calling for submissions from all 50 states to participate in this event. The stated goals include celebrating leadership in the world of innovation in robotics, educating the public about how robotics technology impacts society, and inspiring students of all ages to pursue careers in robotics and other STEM fields.

As importantly, private organizations and businesses are interested in creating new opportunities in fields that include robotics and artificial intelligence. MathLogic recently announced that it is setting up a new Center of Excellence (COE) to encourage companies to improve their efforts to integrate machine learning and artificial intelligence. The goals for the Center of Excellence includes encouraging companies to embrace the new wave of analytics and stay relevant in the marketplace by looking at methods to process analytics and big data in ways that can reduce the amount of processing power required for large operations. If successful, the Center of Excellence will enable companies to successfully incorporate Machine Learning and artificial intelligence into their businesses.

Similarly, the nonprofit MassRobotics aims to support robotics startups by opening a shared robotics innovation space in Boston, Massachussetts. MassRobotics is leasing a 15,000-square-foot facility in Boston’s Seaport Innovation District with plans to expand with another 25,000-square-foot development. The five-floor facility includes a furnished office space for 30 people, shared workspace for up to an additional 60 people, 7,000 square feet of open workshop and lab space with workbenches, and 2,000 sq. ft. of shared lab/prototyping space with a machine shop, 3D printers, electronics lab and robotic platforms like a dual-armed collaborative robot. Companies can rent space as needed to suit their needs.

Thomas Ryden, executive director for MassRobotics said of it, “We are excited to now offer shared workspace designed to support companies, robotics technologies and the robots they are developing. The building, which can host everything from drones to self-driving cars, is a perfect location to help build the premier hub of robotics development in the country.”

Efforts like these can show young people that not only is Artificial Intelligence and robotics starting to move from the big screen to the real world, but they may also be able to find careers in these fields. Current home devices like the Roomba can show them that AI can be accessible and understandable even if it doesn’t have the voice of Rosie the robotic maid. That makes artificial intelligence seem not quite so threatening.

Shouldn’t We Program AI Not To Kill Us, Though?

That is a good point. Even the best AI will be influenced by its initial programming, just like we’re all influenced by what our parents taught us when we were children. In terms of science fiction, Data and Lore were about as different as two “brother” androids can be because their creator programmed them differently. What would the original source code say about the creators of real life AI that may malfunction or “go rogue” if it could be inspected by other experts?

Before we take the knee-jerk reaction of banning innovation in the field of artificial intelligence altogether, perhaps we could ask ourselves: What would we gain if a criminal organization develops advanced AI before we do? The Hydras of the real world simply will not have the ethical and moral codes of those who would be willing to develop AI in a way that benefits humanity. If criminals with access to money and power can develop and deploy AI for their own purposes – possibly violent ones – they are unlikely to ask permission before doing so. So it makes sense to train professionals who can develop AI in an ethical manner and also earn an honest living while doing so.

One good way to start the education of future AI developers is to make robotics “cool” for young people who are still in elementary or middle school. Arduino kits and robotics kits are fun ways to learn about coding and watch robots in action. Another good thing to do is support the AI and robotics industry in ways similar to MassRobotics; startup incubator and MathLogic’s Center of Excellence. That way, young people can see that the opportunities do exist when it’s time for them to start thinking about careers. They’ll be less likely to be lured to the Dark Side of technological innovations like advanced AI when they realize that they can go into this field legitimately and earn decent money without the risk of facing criminal charges for creating malicious AI.

It’s not AI that is going to keep AI from destroying us. AI won’t even be what sidelines us for being no longer relevant or useful. It’s human beings who can be mature enough and smart enough to avoid irresponsible practices when programming AI in the first place and can learn how to work alongside advanced applications of AI on an equal basis. Yes, this may include becoming cyborgs or learning how to upload our minds into an advanced digital form. However, whether we succeed or fail to adopt to the fact that advanced AI is going to happen, that will be completely on Homo sapiens and not our creations.