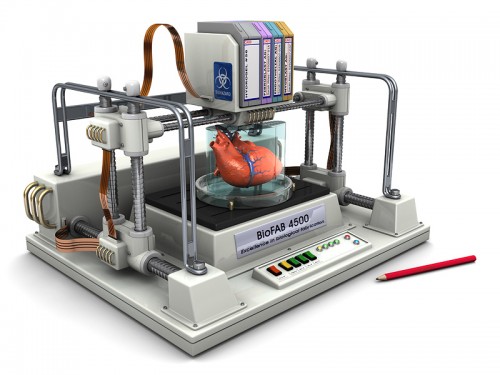 A 3D printer like this can be a game-changer in the medical world. So what are industrial chiefs so scared of? Image credit International Business Times

3D printers just keep getting cooler. They range from the little hobbyist models that can print off things like vases and rubber duckies, to the huge industrial 3D printers that NASA is experimenting with to print out rocket parts. There’s a model that can print off a perfectly square pizza. A preschooler in Cedar Springs got a 3D-printed robotic hand from the local robotics club for Christmas. But, apparently, when you start printing off actual human organs with one of these devices that are formally called additive manufacturing machines, you could easily run up against the ethics crowd who start screaming, “Frankenmonster!”

It’s the same crowd who have made stem cell research a controversial issue. Embryonic stem cells might have the potential to become human life, but potential is all it is. They could also be used to treat conditions like Lou Gehrig’s Disease if the opponents of stem cell research would just get out of the way and let scientists do their job. There’s a new way to turn mature cells into embryonic stem cells that will likely never become a human life and can be used to improve the lives of people with debilitating diseases. 3D-printed organs are pretty much the same way. With future advancements, they could shorten the wait time of the millions of people who need transplants and possibly save millions of lives. However, that will only happen if the ethics crowd wake up and decide whether saving lives is more important than the pure weirdness of actually creating an organ using a mechanical device.

I’ve heard talk that this pure weirdness could cause 3D printers to become banned by 2016, at the very least for the purpose of printing out these potentially life-saving organs. However, I happen to think that this is a flat-out mistake. It will only create a black market for 3D-printed organs that will be as unsafe as getting an abortion was before the Roe vs. Wade decision that ruled anti-abortion laws unconstitutional. Women who were determined to have an abortion were getting them in back-alley clinics and kitchen counters using highly unsafe methods. People who are truly desperate for a new liver will find the person with possibly the only remaining human organ printer in the country and, since that person will be using it illegally, he has no particular incentive to make damned sure that he’s giving the patient a liver that will actually work. So banning 3D printed organs are a mistake when it would be smarter simply to encourage improvements in the technology that will make the organs safe for actual use.

Sites like The 3D Studio are favorites with artists who want to sell their work online.

Already, the manufacturing industry is noticing the promise of 3D printing. Some industries are embracing it. General Motors recently announced plans to expand its 3D printing capability by adding metal laser sintering technology to 3D print fuel nozzles for gas turbines later this year. Other industries are raising a ruckus about potential infringement on intellectual property. This might not sound like a big deal when you are just interested in playing around with a hobby-level 3D printer to create forks or maybe that neat new robot model you found on The 3D Studio.

However, it is a big deal to companies who worry about counterfeit products hitting the market. You might know that if your Ugg boots came from China, they aren’t genuine Ugg. It’s harder to tell that the new iPhone case you got from a third-party seller for way cheaper than you could have gotten it at the Apple Store is a fake if the counterfeiter scanned in a case from Apple and printing it off on a quality additive manufacturing machine, and of course Apple is going to get the complaints if the case isn’t up to snuff. This is a legitimate concern for more than just consumer products. It’s possible for counterfeiters to actually sell fake parts to the military (who maybe need better checks of where the product comes from) and that can put troops at risk on the battlefield. So the owners of the original products are starting to insist on heavily regulating 3D manufacturing in an attempt to cut down on this problem, and this could end up hurting users of 3D printers who don’t actually use it to make a profit or even rip off copyrighted material for any reason. Imagine that you suddenly receive notice of a lawsuit simply because you printed off an alien figure that sort of resembles a Predator to put on your shelf. It could happen. Corporate lawyers are very good about protecting their particular company’s profit margin even if it means suing you for basically being a science fiction fan trying out a cool new technology.

This issue is also a concern for people interested in making a serious effort to get humans into space. 3D printing will be one technology that, at the very least, will be very convenient to have when we need a new part for the oxygen generator and the next supply ship is still four months away. That’s going to be difficult if 3D printers are suddenly so politically incorrect that future Martians are going to lose sponsors because we want to take a few to take maximum advantage of local resources. We see the effects of political correctness every time we go around and around about having a backup power supply that can work when Martian dust storms become intense enough to block sunlight from getting to our solar panels — a problem that has already caused the loss of the Opportunity rover. There has to be a safe way to keep a nuclear reactor in a separate facility that can withstand the effects of a Fukushima-like meltdown and run electric lines to the colony, but we keep getting hung up on accidents like Fukushima – and, really, the power plant has been mishandled so badly, both before and after the meltdown, that I’m surprised that I haven’t heard of a single case where somebody faced charges for that. I would very much like to avoid that level of controversy with a less dangerous technology like additive manufacturing. 3D printers aren’t going to release toxic levels of radiation if they just suddenly decide to malfunction and won’t even cause users to lose a finger if they are used properly. Really the only dangerous bit will be the superhot printing materials when a build is in progress, and one would assume that potential future Martian colonists will have enough common sense to avoid burning themselves.

Really, 3D printing has so many potential benefits that banning the whole thing would be nothing short of stupid. It’s a growing industry with experts anticipating that end users will spend $5.7 billion on 3D printing over the next three years. Additive manufacturing could make consumer products cheaper by eliminating many of the costs associated with the manufacturing process. It can be used to create things like prosthetic limbs that actually work for preschoolers and, once the technology has advanced far enough, even create a working heart for somebody who needs it and doesn’t have the time to wait for a new organ. So it will be a good idea to see exactly how far the technology can go, have a minimum amount of regulation where necessary, and keep the technology safe by not forcing it underground through banning it altogether.

Get Started In The 3D World

Get Your Own 3D Printer