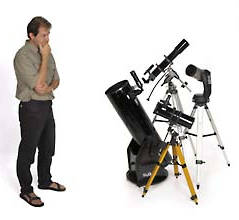 Are you looking for a new telescope? If so, you probably wonder what kind of options you really need. It might be tempting to get the most expensive one that could rival the telescopes that professional astronomers use. However, if you don’t plan on competing with Neil DeGrasse Tyson, you should consider a telescope that will match your skywatching habits.

Things To Consider When Choosing Your Telescope 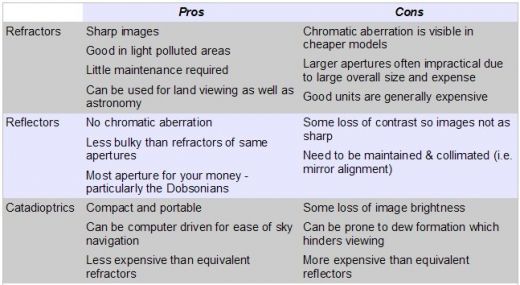 Pros and Cons of each basic type of telescope. Image credit Hubpages

Do you have a favorite category of objects to view? If so, you should consider one of the three most common types of telescopes.

This is always something to consider when buying a telescope or any high-priced item. What “options” are you really going to use? Some items to consider include:

Where Can I Find All This?

If you’ve browsed astronomy sites, you’ve probably seen the ads for telescopes. I’m partial to Orion, myself. They have a wide range of options for skywatchers of all levels of skill and enthusiasm.

Maybe somebody decided that they don’t use their telescope as much as they thought they would. In a lot of cases, it’s not the fault of the telescope. You might find a used, but still good, telescope if you look around for listings like these.