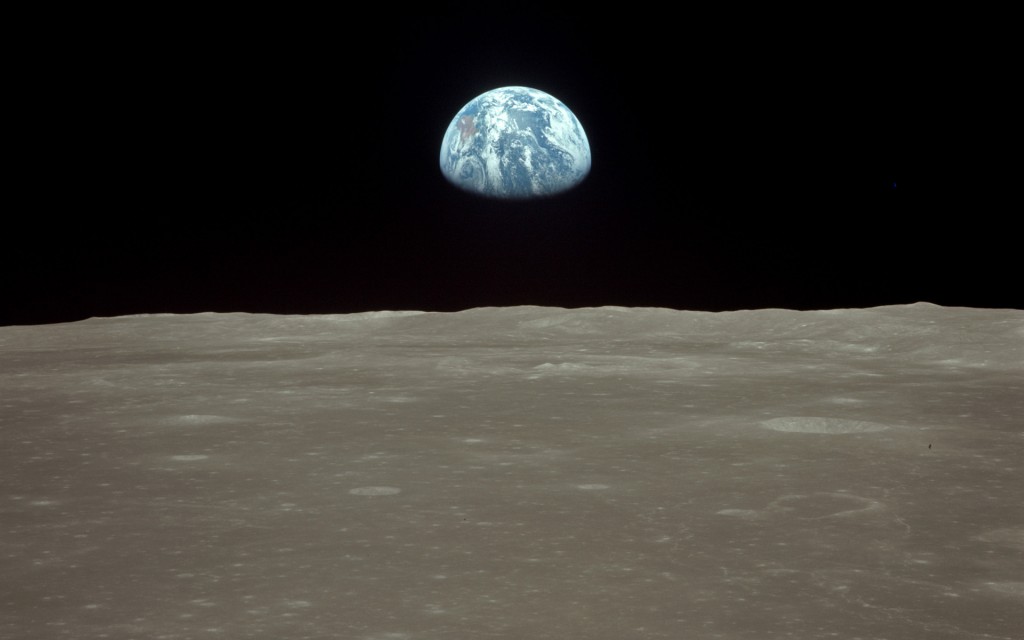 How many of you remember the first time you saw Apollo 8’s “Earthrise” picture? The crew couldn’t have done a better job if they had been professional photographers who deliberately spent several minutes setting up that shot. It was the first time anyone had seen Earth from lunar orbit. That picture hit home that we’re just one little pebble floating in a big cosmos.

Don’t worry, I’m not going to go on a rant about how we should protect that little pebble. Like most normal people, I recycle my cans and bottles because I care about not taking up more landfill space than absolutely necessary. We even dumped our cardboard boxes on the recycling guys after the last time we moved. However, I’m not going to tell you to turn off the lights when you leave the room because your carbon footprint is too large. At most, I might remind you that there is such a thing as an electric bill the next time you get too lazy to flip a stupid light switch. If you’re really worried about your carbon footprint and/or think your electric bill is way too high every month, there is some merit in creating a DIY renewable energy device like in the video below.

Most of the Apollo astronauts had seen roughly the same thing as Apollo 8 (the exceptions between Apollo 7 and 9). As Apollo 14 Moonwalker Ed Mitchell put it in a 1979 issue of People Magazine, “From out there on the Moon, international politics look so petty. You want to grab a politician by the scruff of the neck and drag him a quarter of a million miles out and say, ‘Look at that, you son of a bitch.’” How many of Earth’s problems would be solved if we all could just quit bickering and focus on solutions that actually work?

As “Earthrise” showed, sometimes you have to get out of the box before you even realize that there is a box. Trying to solve all of Earth’s problems without getting away from Earth would be like trying to fix your leaky roof without ever going outside and climbing on top of it. You might manage it, but it would be more expensive and frustrating than it needs to be. Even now, we have imaging satellites that can keep track of where deforestation is occurring and GPS satellites that indirectly created jobs with a multibillion-dollar industry that revolves around selling you a TomTom. How many problems could be more efficiently solved when we start getting serious about human expansion into space?

If you’re thinking that we should solve Earth’s problems before we do more with outer space than we’re doing right now, this is probably where you’re going to stop reading. Space travel is expensive – so expensive that Elon Musk will be giving us a bargain if he can really get the cost of colonizing Mars down to $500,000 per future wannabe Martian like he says. It’s dangerous, too, with a thin atmosphere, toxic regolith and dust storms that can be beyond annoying. However, humans are pretty good at thriving in environments that require some level of technology to even survive in. As Musk puts it, “It’s a fixer-upper of a planet but we could make it work.” If we wait until all humans are on the same level before we start the process, Elon Musk’s plan to make trips to Mars no more expensive than a house in a moderately affluent neighborhood is never going to happen.

What could we learn from such an effort? The sustainability movement that has seen an upswing recently ought to be delighted. Future Martians would be moving sustainable living out of the classroom and the laboratory and into everyday life out of pure necessity. Power, air, food and water would have to be produced locally with very little waste. Raw materials that can’t be extracted locally for spare parts would have to be recycled by running old worn-out parts through something like a Protocycler to make spools for the 3D printer. Basically, Martians will be showing Earth how it’s done.

We could also learn a little something about planetary engineering. Mars itself could be our laboratory for learning how to keep Earth habitable (yeah, don’t screw up, we only have one Mars). Plans for terraforming range from the blunderbuss approach of smashing asteroids into the poles, which would require a fine touch at the controls to make sure that we don’t miss and hit, say, Earth. Then there’s the more refined approach of releasing greenhouse gases into the atmosphere until the temperature warms enough to create a feedback look that could produce a more Earth-like water cycle that includes bodies of liquid water on Mars’ surface. Then just add plants. Considering that such a thing could take centuries if not millennia, I could see how some people would get impatient and come up with the asteroid approach. However, if we manage it, we could learn quite a bit about what goes into the Earth system. If Mars throws some unexpected curve balls at us during the terraforming process, we might even learn that we aren’t quite as important as we think we are as far as our ability to transform planetary systems goes.

They say “Earthrise” was the one picture that really helped to jump-start the environmentalist movement. It was a reminder that this is the only planet known to host life (and, yes, beer). Does that make us unique in the cosmos? While recent news indicates that Type III “supercivilizations” may be rare or good at not emitting light patterns that we would recognize as being produced by a technological civilization (or else it’s just the “speed of light” thing again), that doesn’t mean that life doesn’t exist elsewhere in the universe or that it wouldn’t regard us as particularly backwards children who refuse to leave the cradle and keep squabbling over shiny baubles. Anyway, if you were a parent, wouldn’t you remove your baby from a cradle that you had learned was being recalled by the manufacturer over safety issues? The same goes for Earth. If we wait until all the problems are fixed before we take the first toddling steps away from it, we may find ourselves living in an increasingly dangerous cradle when we find out that those problems aren’t going away and may even be getting worse no matter how much money we throw at those problems. I’d rather not be there when that cradle collapses on us, and anyway, learning how to live on an inhospitable planet like Mars could teach us a little something about living on that shiny blue and white pebble in the “Earthrise” picture.