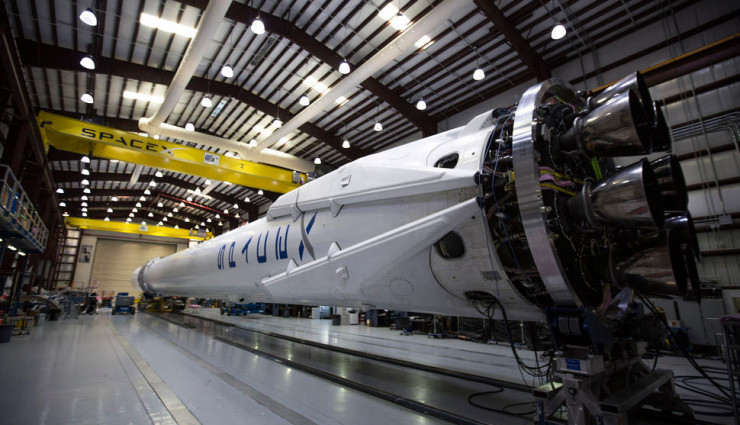 Internet satellites could be launched on a rocket like this. Image credit Ecomento

Elon Musk has put in an application for official FCC permission to launch 4,000 satellites that can provide Wi-Fi connections to the entire planet. If this goes through, this will have obvious positive implications like providing Internet service for underprivileged areas where ISP providers believe there is no market for Internet access. The problem is that many potential customers in impoverished regions have no means to pay for it.

…But the FCC could bog this down by making SpaceX jump through hoops.

Don’t worry; this post isn’t meant to blast capitalism. The problem isn’t capitalism. I’m hoping Elon Musk can push this through the FCC bureaucracy so that more people having access to the Internet creates a feedback loop that makes everybody richer. Musk’s plan still faces obstacles like the fact that rivals like OneWeb own exclusive licenses to provide satellite Internet services in various target regions. The only major problem I have with existing ISP providers is that they’re often dealing with investors who can’t see past the next quarterly report, so they hesitate to make any major investment in regions where most people live below the poverty line and don’t even have much in the way of access to mainstream financial services. SpaceX has the advantage of being able to take the long view without dealing with investors and that means being able to create the feedback loop of more people being online and being able to access markets where they can both buy and sell goods and services.

He isn’t even trying to make satellite Internet access a monopoly when Richard Branson has gone on record as wanting to do pretty much the same thing. Branson has even as much as said that he’d be willing to partner with Musk on this effort and is currently backing OneWeb, an effort to launch Internet satellites that can provide access to underprivileged regions and also provide connectivity to portable Internet access points that can help coordinate rescue and relief efforts in an emergency that has disabled Internet infrastructure in the affected region. At most, SpaceX will be one of several contenders to launch the first widely used satellite Internet service if this company can get a jump-start on launching the planned satellites.

One thing that a lot of people talk about a lot lately is the wealth gap. Why do some people seem to have more money than they could reasonably spend in a dozen lifetimes while others have practically nothing and starve to death because they can’t afford food? What I like about OneWeb and Elon Musk’s plan, both of which could give underprivileged areas access to Internet-based services that people could really use to improve their station in life, is that they’re actually doing something about it in a way that doesn’t demonize the people who seem to have won life’s lottery or penalize successful people for being successful instead of just talking about the wealth gap problem.

Four thousand satellites might sound like overkill when you’re talking about covering the entire planet. However, they’re going to be orbiting at an altitude of 650 kilometers. (For comparison, the International Space Station orbits at an altitude of between 330 and 435 kilometers.) The combination of the height and the fact that they’ll be providing essentially wireless Internet services means that the “bandwidth” of any single satellite is going to be slow. If you’ve ever had to move your antenna for your satellite TV because a tree was getting in the way of a signal, you know how annoying it could be to not have a direct line of sight to receive the satellite signal. GPS basically works because there are normally four GPS satellites within line of sight of any given receiver at any given time. More satellites means better redundancy in case one fails or a receiver can’t “see” any particular satellite.

In fact, it’s a shame that Elon Musk needs to file for approval from the FCC bureaucracy at all. There have been accusations that high-level government bureaucrats are in the pockets of large corporations that care more about their quarterly profit margins than about making large up-front investments designed to see a greater return over longer periods of time. This is exactly why SpaceX isn’t very interested in courting investors or issuing an IPO. Most investors don’t take the long view and, when you’re trying to change the world, you want to avoid that trap. That’s why I generally retort that at least Elon Musk is working on barge landings for rockets for an improved chance at launching and landing reusable rockets from areas in the ocean that are beyond U.S. waters whenever the topic comes up. The FCC will have less ground for complaint if he can score the PR points of providing Internet service to underprivileged areas without doing it in U.S. territory and, therefore, avoiding the need for their stamp of approval.

It’s a good thing. One thing I’d like to see is the combination of a greater percentage of the human population with reliable Internet service, greater use of cryptocurrencies by the 40% of humanity who don’t have access to mainstream financial services (only doable if at least one party in any transaction can connect to at least one node), and the feedback loop that comes with including more people in the mainstream economy and making everybody wealthier. That’s why I support efforts like Elon Musk’s plan to launch 4,000 Internet satellites.