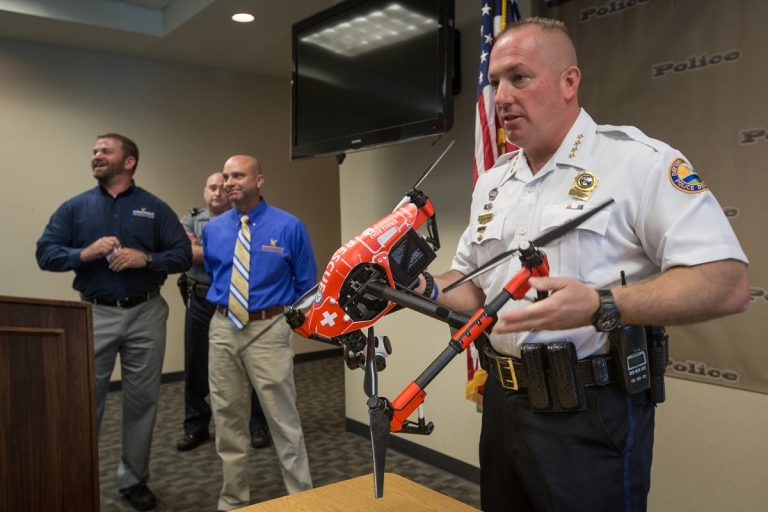 Chief Craig Capri holds a DJI Inspire UAV during a press conference to announce the implementation of a new aviation department, with help from Embry-Riddle at Daytona Police Department, August 10, 2017. Embry-Riddle faculty will be training officers from the Daytona Police Department to operate the UAV’s in search and rescue, disaster reconnaisance and to preserve and protect human life. (Embry-Riddle/David Massey)

DAYTONA BEACH, Fla. ­— When Hurricane Irma passed over Daytona Beach, tearing off roofs, twisting signs and knocking over a water park slide, professors from Embry-Riddle Aeronautical University were there to help assess the damage.

Using unmanned aircraft systems (UAS), or drones, from the university’s Daytona Beach Campus, three College of Aviation professors worked with police officers from the Daytona Beach Police Department not only to assess damage after the storm, but to photograph and document critical areas before Irma hit.

The professors were able to document damage to hotel roofs, businesses and city signage as well as damage to one of the slides at Daytona Lagoon Amusement Park that ended up on a roadway.

“The use of UAS provides an aerial perspective that can confirm suspected ground observations with great detail,” Cerreta said. “Our professors were also able to gain more experience and knowledge about disaster assessment.”

The assistance was provided as part of a collaboration implemented in August between the Daytona Beach Police Department and Embry-Riddle’s Worldwide and Daytona Beach campuses.

The police department started the new aviation program to enhance search-and-rescue operations and crime scene assessments. Selected officers are receiving training on unmanned aircraft from Embry-Riddle and taking online classes to become certified by the Federal Aviation Administration as UAS pilots. Embry-Riddle launched one of the nation’s first UAS degree programs in 2011, and now all three of the university’s campuses – Daytona Beach, Worldwide, and Prescott, Ariz. – have burgeoning UAS programs.

Embry-Riddle professors are also helping the police department develop policies and procedures on using unmanned aircraft systems that adhere to Department of Justice guidelines concerning respect for civil liberties, and with developing a safety management system to determine when it is safe to use UAS based on weather and other conditions.

Galante, who has bachelor’s and master’s degrees in Aeronautical Science from Embry-Riddle’s Daytona Beach Campus, retired full-time from the Daytona Beach Police Department in 2015. He started teaching at Embry-Riddle in 2016, and helped establish the aviation program at the police department. He said the use of drones after storms such as Irma helps communities return to normal more quickly by identifying areas with the most damage as well as downed power lines and road blockages.

“We are just trying to help the community as a whole recover from a disaster,” Galante said. “We were also able to live stream video back to the police chief’s office and department heads at Embry-Riddle so they could have instant accessibility to information.”

Robbins said the data and lessons learned are being used in classes at Embry-Riddle’s Daytona Beach Campus and are useful to students conducting service learning projects and internships with the police department.

“They can go out and work with real-world applications in a real-time environment on projects that will benefit society,” Robbins said.

Sgt. Tim Ehrenkaufer of the Daytona Beach Police Department said the professors were extremely helpful in assessing the damage from Irma and he looks forward to working with the university and students in the future.

“We were able to get a good overall perspective of areas we couldn’t see from the ground, which we will be able to use for reimbursement with FEMA,” he said.

Ehrenkaufer is supervisor of the aviation unit and has received certification from the Federal Aviation Administration to fly unmanned aircraft, along with three other officers. He said seeing Embry-Riddle professors use drones in a real-world application was also valuable.