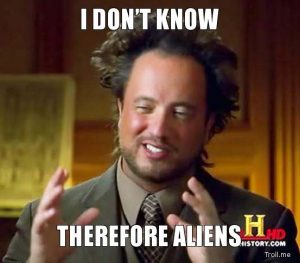 Fast Radio Bursts (FRBs) are very powerful radio bursts that can last less than a millisecond and emit as much energy than our sun emits in 10,000 years. It’s safe to say that there are very few, if any, carbon-based life forms that would want to be close to their source. However, there are some scientists who speculate that aliens could be generating these FRBs to propel interstellar solar-sail spacecraft. If so, those aliens must have a source of power that would make our sun look like a light bulb or aren’t using that kind of technology all that often (or both). If not, this may be a case of humans coming up with wild speculations to explain the inexplicable. Using super-advanced aliens to explain what our civilization doesn’t have the scientific and technological ability to explain right now sounds like a classic case of “God of the Gaps” reasoning: If I don’t know, it must be gods. Or aliens.

Classically, “God of the Gaps” has been used to explain bad weather, earthquakes and volcano eruptions. If there was a bad thunderstorm and the top half of a large tree was found shattered and toppled over afterward, clearly Thor was pissed off by something and that particular tree was in the way. Eventually, we found our scientific footing enough to start explaining the real causes of natural disasters and the gods began to retreat. Pele no longer had to burp to set off volcanic eruptions.

Unfortunately, this also opened the door for aliens to start replacing the gods. How could the Egyptians build the pyramids with no access to equipment built by Caterpillar? Did aliens do it for us? Could a rogue from an advanced civilization really have shown us how to tame fire (an event that, by the way, apparently scared that civilization’s governing body half to death because they thought that humans would learn how to advance to their level once we’d mastered fire)?

Or are the spreaders of these theories giving too little credit to human cleverness in an environment where they might not have had access to industrial machines? Plausible explanations for the pyramids include an internal ramp that the builders could have used to transport stones up toward the top – and of course, how hard would it have been to invent scaffolding or purely mechanical lever and pulley systems that could have lifted those stones and moved them into position? They could have done it without a single Caterpillar machine or oversight from a canine-headed alien.

Are Aliens Having Solar Sail Races, Though?

Watching aliens race three times around a dangerous track with solar sails might be entertaining but not a likely use for anything that could produce FRBs. Some scientists have theorized that propelling a solar sail this way is more likely to be used for interstellar probes, or possibly even larger colony spacecraft the size of 20 large cruise ships. (Doable with sufficient shielding to account for the fact that you’re basically using electromagnetic radiation to propel your spacecraft.) However, scientists also theorize that a device that can generate FRBs would have to be huge – probably at least as big as Earth!

So between that and the fact that they would basically have to collect all of the radiation from an “average” G-type star like our sun for 10,000 years to even be able to use it, a Kardashev Type II civilization might be able to pull it off because it can make use of the energy of an entire solar system, but it won’t be making use of an FRB generator very often.

Keep in mind that this is an event that Earth can detect from 3 billion years away. It might have some of the earmarks of artificial transmissions, but no one’s going to transmit a radio signal that strong just to say hello to someone in another galaxy. They may have also figured out that there are more energy-efficient ways to pursue interstellar travel by the time they’ve reached a technological level that makes building an FRB generator feasible (well, that and building a device the size of a planet is not likely to be cheap. That’s no moon!).

So it would make sense to keep searching for a natural cause for FRBs. Interestingly enough, they are theoretically more common in active dwarf galaxies that also see more gamma ray bursts and supernovae. More plausible theories include the merger of two black holes or the reorientation of a powerful magnetic field belonging to an exotic type of neutron star called a magnetar. Just like the pyramids, the “Alien of the Gaps” may not be necessary in the case of fast radio bursts.