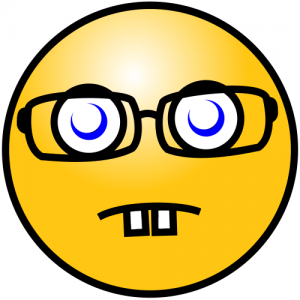 So you hear more people calling themselves geeks lately. That kid who used to get laughed at and bullied for having more brains than brawn is suddenly becoming the go-to person for Geek Culture 101. Computer smarts are becoming more essential in the real world, which can bring out the geek in all but the blondest of us.

You do have to know where to draw the line. There is no such thing as a fashion geek. Fashion is such a moving target that geeks know when they’re better off sticking with the basic T-shirt (preferably not red to avoid becoming a target for phasers) and geek glasses (the more quadrangle-shaped the better). How do you know when you’re a geek?

Bonus geek points if you recognize the guy in this video.

Been a while since a video last cracked me up. Who says (astro)geeks can’t hold a beat?

If you find yourself nodding your head to more than two of these, you could well be geek material. Go ahead and give yourself a pat on your back. In this modern world, geeks should learn that they are the ones in control. If somebody gives you a hard time for having no social skills, they might suddenly find themselves without technical support or, worse, a “Creeper” virus crawling around on their computer screens. That’s right. Don’t get mad, just get geeky. Geeks rule!