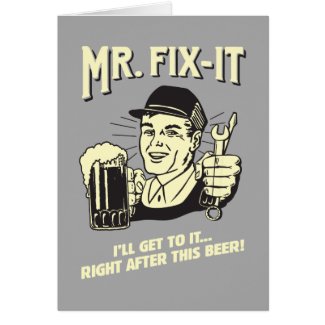 Some people don’t really put much thought into it. They might get a ridiculous card like the one pictured here and give it to their dad during dinner at their favorite sports bar. It’s kinda meh even when it includes a gift card for their favorite sports center. Hey, at least it’s good for a moment’s lighthearted humor, right?

And then there are the people who don’t do Father’s Day. That day kinda sucks for individuals whose fathers were never really in the picture or he was an abusive parent or celebrating Father’s Day means a visit to the cemetery every year. Those people might just decide to hibernate until it’s over if they don’t want to end up mentally ready to strangle the person who invented Father’s Day in the first place. So the point of this particular blog entry isn’t to pretend that the picture of a perfect Brady Bunch family that seems to happen around Father’s Day or Mother’s Day is at all realistic when, for some people, it’s just depressing.

Anyway, the lady behind Mother’s Day was right when she complained about how those days have become way too commercialized. For corporations like Hallmark, it’s a way to sell more cards and tacky gifts that might hold your parents’ interest for a minute. While I’m not against businesses earning a fair profit in a truly free market system (after all, that’s why businesses exist in the first place), surely you can do better than buying a novelty tie for your dad. It would be way cooler to buy your dad some new fishing gear to replace that well-used old tackle, and that’s if he’s totally into fishing. Or maybe (and I know this’ll be a shocker) don’t buy him a gift at all and just spend the day helping him nail down that home improvement project he hasn’t quite managed to complete yet.

Some people might say that you shouldn’t overthink Father’s Day. After all, he’ll understand if you just get him another cordless drill to replace the one that got burned out the ONE time that he wanted to put it to serious use. I say that, if you’re going to spend money on a gift at all, you should at least put enough thought into it to find one that will truly delight your dad. After all, he might one of those people who would appreciate the ability to fly a drone with his smartphone. That way, neither of you will be disappointed by a lackluster gift.