According to the International Potato Center, potato crops can produce 2-4 times the food value per hectare compared to most grain crops. A new potato plant can grow from a potato or a piece of potato that contains the eye or from potato berries that can contain 100 to 400 seeds. Because they can grow at altitudes up to 4,700 meters above sea level on Earth, can produce the same amount of food value with less water than grain, and in climates ranging from tropical to Arctic, they are considered an ideal crop for growing in impoverished countries where food supplies may be limited by famine or political strife. Now the International Potato Center has confirmed that potatoes can be grown on Mars. 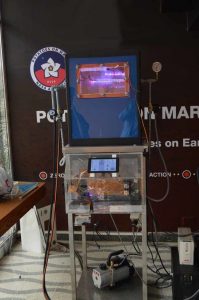 The CubeSat being used for the International Potato Center‘s experiments.

The International Potato Center is conducting a series of experiments to discover whether potatoes can grow in extreme environments like the atmospheric conditions found on Mars. A potato was planted in a specially constructed CubeSat on February 14, 2016. The CubeSat was built by the University of Engineering and Technology in Lima, Peru, based on designs and advice from NASA Ames Research Center. Preliminary results using Mars soil simulant are positive and show only that future Martians may only have to be prepared to do some light processing such as adding nutrients and preparing a loose soil structure so that the tuber can obtain sufficient quantities of air and water.

The CubeSat houses a container holding soil and the tuber. Inside this hermetically sealed environment the CubeSat delivers nutrient rich water, controls the temperature for Mars day and night conditions and mimics Mars air pressure, oxygen and carbon dioxide levels. Sensors constantly monitor these conditions and live streaming cameras record the soil in anticipation of the potato sprouting.

The experiments being conducted by the International Potato Center may also address concerns about the effects of climate change in regions that rely on local production of potatoes for food and may be hit the hardest by extreme weather events, an altered growing season or drought brought on by a changing climate. Besides seeing how the potato might fare in the Martian environment, the researchers are also interested in discovering how potatoes might survive in rapidly changing conditions caused by climate change.

Continued experiments will also show which of the 4,700 varieties of potatoes grown worldwide will fare best in extreme Martian conditions. This may help small farmers who grow potatoes in harsh environments that may grow harsher by showing which potato varieties are already the hardiest and can be bred to withstand harsh growing environments. It may also make the design of future Martian greenhouses easier if researchers discover that potatoes can thrive in environments with reduced air pressure compared to what they normally get on Earth.

“Growing crops under Mars-like conditions is an important phase of this experiment,” says Julio Valdivia-Silva, a research associate with the SETI Institute who has worked at NASA’s Ames Research Center (NASA ARC) and now works at UTEC in Lima. “If the crops can tolerate the extreme conditions that we are exposing them to in our CubeSat, they have a good chance to grow on Mars. We will do several rounds of experiments to find out which potato varieties do best.”

This is obviously good news if your name is Mark Watney. It’s also good (if unsurprising) news for anyone who is thinking of participating in a long-duration crewed mission to Mars or eventually joining a Martian settlement. Interested viewers can catch a live feed of the ongoing experiment on Potatoes.space/mars.