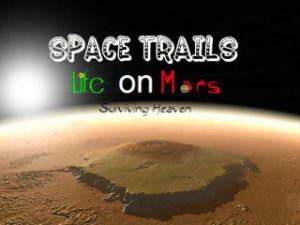 Earlier this year, I had the opportunity to interview Hank Slater, who was then running a fundraiser for a series tentatively titled Space Trails: Life on Mars. In this interview, Mr. Slater talks about a few updates to the project, including a new name for the project, Surviving Esperance.

Heidi: I understand you’ve changed the name you’re using and some names in the project since we last chatted. Could you fill us in on the new names and the reasoning behind the changes?

Slater: First of all, my name, I initially intended to use a screen name, which was fairly common in the industry. However, upon further consideration, I realized that my given name, Zack Kalinyak has a more memorable ring than Hank Slater. I was convinced to go back to the name of Zack Kalinyak, because it is more memorable.

The other thing that changed is because of the fact that the project is Space Trails: Life on Mars and there is a Chinese reboot of the UK television series, Life on Mars, that is currently popular, I felt that that was going to be—it was either going to take fans from Life on Mars or Life on Mars was likely to kind of be riding on the coattails of Space Trails and I didn’t want either. I wanted to stand up on its own.

Heidi: What sorts of new technologies and events have impacted your recent changes you made to characters and events in the show?

Slater: Changes to characters and events in the show, yes. As we completed casting, we discovered that some of the roles that we had in mind didn’t fit the actors we had to choose from for the completed casting, so we ended up going back and are reworking some of the aspects of the pilot and everything, one of which actually makes it slightly more diverse than we initially had, so that’s one of the advantages to doing it that way.

Slater: Initially when we were writing Surviving Esperance as Life on Mars, we intended for it to be a commentary about how to colonize Mars with Mars being the central point for refuge during a time at which no country on Earth is really a strong place to go—a good place to go for refugees.

However, in doing that, we did a little more research and discovered that NASA has plans to colonize Mars, one of which is with a—one of the options they’re contemplating is to use antimatter in the rocket, which prompted an idea for The Grave Endeavor. What are the benefits and detriments of using antimatter? That’s one of them.

Heidi: What advantages do you have as an independently-produced show?

Slater: An advantage to being an independently-produced show is, as I was researching, trying to find a producer who is more renowned than we are to handle some of the issues, for instance, the visas for foreign entertainment industry talent, which is important for Surviving Esperance international base. It would be better if we had someone who was more well known to assist with that.

So, I was trying to find that, and I discovered that Bryan Fuller, who did Pushing Daisies, which was a very popular series, had this series, Pushing Daisies, canceled because of too high piracy. Because the fan base grew higher than the amount of viewers the network had. Which when you look at that and see that yes, the independent producer who is going to be a streaming service who has free episodes available, limited numbers of free episodes available perhaps once a week, kind of the way television used to be, with back episodes being paid for by a subscription fee, that they have a greater reach because they use the pirate sites that networks are finding as a way of advertising the series.

That’s one advantage to being an independent producer, is that you can target the Achilles’ heels and use them as a marketing platform as opposed to competitive competition.

Heidi: What milestones have you reached since we last spoke?

Slater: Let’s see. We have got the cast largely completed. We are working on a fundraising campaign for Surviving Esperance on Indiegogo that is much better thought out for how to pitch a TV show, because Indiegogo fundraising campaigns are better are for producing gadgets and technology, not for TV. So, for TV, we’ve come up with a good pitch for Indiegogo that works well for a TV show and we will be getting that completed this weekend, is our goal, and to get it done around September the 1st. It may not make the September the 1st deadline, but it will definitely be in the first week of September. Our website is almost ready to go live, so those are a couple of the milestones that we’ve reached so far.

One of the other things that I consider a milestone is as we’ve been trying to get attention from producers, one producer actually gave us the huge compliment of saying our production company is too small and doesn’t have the budget for a project this size, that this is a solid concept and “you should keep trying to find someone better suited for it.” That was very encouraging, and I do consider that a milestone, that we got that compliment.

Heidi: Okay. When do you plan on releasing this show and where can the audience find it?

Slater: We are hoping to release it next spring. We are hoping that we will have it ready for release next spring. That is our ideal goal. We will have it on the First Fiction Productions website. It will be available on YouTube. I intend for it to be available on Vimeo and other free viewing sites. I think each country has their own. I will be doing research into that to ensure that we get the widest range of exposure possible because the space colony is an international colony. I think it will have international appeal, so I want to control the international advertising campaign through the free streaming sites. That is where the audience will be able to find it.

Heidi: Okay. That’s all the questions I have. Anything you’d like to add?

Slater: Yes, I forgot to mention this when you asked about the milestones. One of the milestones that I forgot is that we have attached Mo Brings Plenty, who is a Native American, well-known actor, to play the role of Medicine Man Bradley Sullers. I find that a positive sign, considering that he was another one who read the script—or read a small excerpt of the script—about his character, Bradley Sullers, and said, “I’m in.” So, I am very excited about those developments.