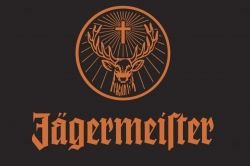 Jagermeister is Germany’s most popular exported liqueur. It has a mildly fruity taste without being too sweet and its exact recipe is one of the best kept secrets of the alcoholic beverage world. Jagermeister is rumored to include 56 herbs in carefully balanced measurements. It is a favorite for shooters and people who enjoy a relaxing after-dinner drink. It is also seeing increasing popularity in mixed drinks like rum and cola.

A Seat At The Table

Jagermeister is a 70-proof liqueur that has been made since 1934. All of its employees are sworn to secrecy about its exact recipe.

Place ice cubes in the highball glass. Pour the jagermeister over them. Add the soda.

Pour cherry soda into small glasses. Add Jagermeister. Top with one cherry for each glass

Everything But The Jagermeister

…Which you’ll have to ask your local liqueur store for.