How much network cabling do you actually see when you walk through an office building? Usually not much, but if you’re a network administrator, you can imagine exactly where that cabling is tucked in an out-of-the-way place that most people don’t get into. If you suddenly start getting calls from Accounting that their network access has dropped out, your first thought might be their router. However, if you can reach their router and confirm that the setting are correct, it’s also possible that one of the Ethernet cables has somehow become unseated or snapped. In fact, most OSI Level 1 (Physical layer) problems are more likely to be an issue with LAN cabling than WAN cabling because cables get moved, unseated and reseated and tend to be more prevalent in office walls than people who only care that their connectivity stay up and running usually realize. 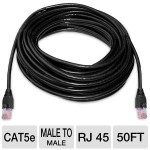 Ethernet cabling is mostly used in Local Area Networks (LAN) to make workstation-to-switch, switch-to-switch, and switch-to-router connections. Standard Ethernet cables use eight wires twisted into four pairs to counter electromagnetic interference (EMI), which can degrade signals, and crosstalk, which causes signals to jump from one wire to another. The regulatory organization ANSI sets standards for Ethernet cabling and has categorized cabling as Category (often abbreviated as “Cat”) 3, 5, 5e and 6. Each category has its own standards, specifications, distance limitations and maximum throughput rate.

Duplex helps improve speed by allowing data to flow in more than one direction at a time. Most modern cabling operates using full duplex, which makes use of previously unused wires to send data even when there is already data on the wire. In unusual circumstances or if the network uses older standards, the cabling might use half duplex, in which devices have to wait until the cable is clear of signals before they can transmit and collisions are more common.

If you are a networking professional who has worked for Internet providers, you know how customers are always pushing for faster, more reliable network access. You can set up your routers to automatically negotiate the actual speed on the Ethernet port or you can hard-set the speeds. On the router, you just access your Ethernet interface by accessing your Configuration mode, Router(config)#, and then accessing the interface used by your Ethernet (usually interface fast ethernet 0/0 but this can vary depending on the model of your Cisco router). Once you’re in the Interface mode, Router(config-if)#, you can see its currently set speed by typing speed ?. The output will look something like:

If you want to see more settings for your Ethernet interface, return to the Privileged mode of your Cisco router, Router#, and type in, show interface fastethernet0. The settings will usually look something like this:

FastEthernet0 is up, line protocol is up

The arrangement of the eight copper wires on each end of the cable will determine whether it can be used for connecting switches to switches, switches to routers, or switches to workstations. Each wire will correspond to the pin it connects to at the end. 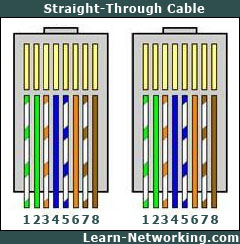 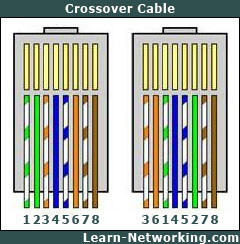 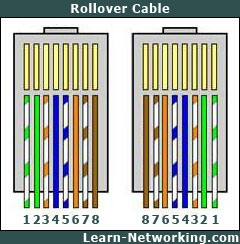