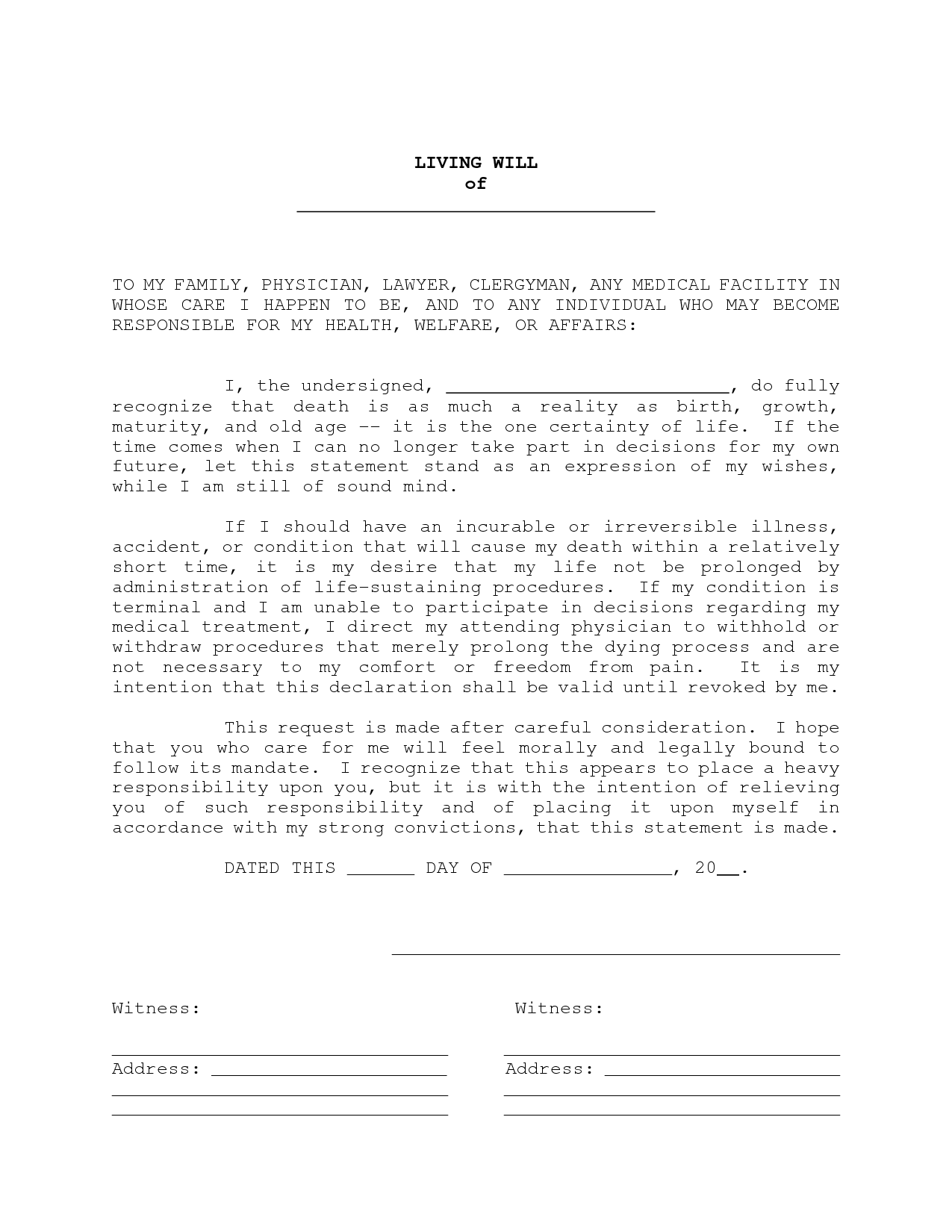 This is what a typical living will looks like on Earth. Will we need something like this on Mars? Image credit DocStoc

The idea of a living will and the right to choose what kind of quality of life you are comfortable with is a hot topic in many developed countries around the world. Do you want to be sustained on life support if you’re in a coma with no chance of recovery? How about if you have a disease you know is going to kill you slowly and painfully over the course of six months and you don’t want to rack up a huge medical bill? I know that euthanasia or “assisted suicide” is illegal in some countries even when that’s what a person wants, but these are decisions that responsible adults have to make well in advance so that medical care personnel know what your wishes are if and when an ambulance crew brings you to the emergency room.

If you’ve read my other blog entries, you might have guessed that I applied to Mars One. I did it knowing that there are risks, both of dying in a fireball during launch and of contracting a lethal form of cancer because I absorbed a little too much radiation. I did it knowing that there would be no flying me back to Earth for medical care if I get sick. What would I choose if there was just nothing growing in our hydroponics units that would help, even assuming that we have herbal treatments available? If it was bad enough, I would probably work for as long as I could and then simply choose not to be a burden to my crewmates. I even have a euphemism for Martians who choose euthanasia – the “long walk out the airlock.”

Morbid, aren’t I? However, I just see it as practical. I can already see the sidelong looks of my crewmates who wonder if what I have is contagious. It would have the same emotional impact as being treated like a Biblical-era leper, no matter how they try to reassure me that I’m still a valued member of the crew. They want to protect their own health even if it means isolating the person who is sick. Really, in an environment like the one we have with the planned Mars One settlement, I wouldn’t blame them. Nobody wants to be the next person who catches a disease that is incurable with what we have on hand.

Besides, it becomes a resource issue. It wouldn’t be very difficult to quarantine a sick person by removing the “hallway” to one habitat if somebody doesn’t mind sleeping on the couch in the other. Then you’re pretty much hoping for the best, that the person in quarantine is strong enough to overcome the illness on his or her own. However, that can get old real fast, especially when you have to sterilize the entire habitat after the person either recovers or dies before you use it again. (And the perchlorate in Martian regolith is good for one thing. It can be turned into chlorine for cases when you want to make sure those germs are really dead.) Before too long, many Martian settlers might just decide to save all that trouble.

Unless you happen to be a very twisted person who likes watching people suffer, you likely won’t want to watch one of your closest buddies dying of a very painful ailment. It’s like watching your elderly aunt progress through the stages of dementia. You had to make yourself visit her even though you knew she might not recognize you, didn’t you? And maybe at some point, you wished that things would just speed up so she wouldn’t have to suffer anymore. That doesn’t make you a bad person.

Now imagine that your friend who you’ve shared a habitat with for a few years had a bad accident during an EVA and now can’t walk. You both managed to make it back inside, but it becomes obvious that he’s been paralyzed. Do you just give him a monitor and hope he finds enough fulfillment in sitting around the habitat all day? Are you going to catch him dragging himself toward the airlock someday? Or do you listen to what he’s too ashamed to ask for when you see that all his will to live has simply drained out? I know it’s a tough call. However, he may well realize on his own that he’s not earning his keep like he used to someday. You don’t need to be the one who carries him to the airlock. Just let him know that he’s still your crewmate and you respect his right to decide how he wants to deal with being crippled.

When Martian colonies grow to the point where we can spare the resources for a decent sickbay, things should start improving. However, by that time, euthanasia may well have gone from a morbid topic that nobody really likes to talk about to a real fact of life that Martians just have to live with. We might have to lay down some ground rules to ensure that people who choose that route does it voluntarily and under no more duress than what is already happening to his or her body. Choosing the “long walk out the airlock” could become just one of many harsh but practical customs that are part of life in an unforgiving Martian environment.

What are you going to do if something happens before you’ve left Earth on your way to Mars? It’s like I tell people who talk about the risks of spaceflight. You could get into a terrible car accident on the way to work tomorrow. So it makes sense to have something on file so your family knows what you would have wanted.