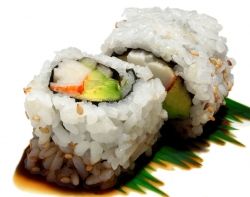 When most people think of sushi, they typically think of raw fish wrapped in rolls. Traditional sushi is actually quite good for you. The basic ingredients are vinegared rice, a type of dried seaweed known as nori, vegetables and fish. Many of the traditional sushi recipes are low-calorie while rich in fiber, nutrients and brain-building Omega 3 fatty acids. The trick is to build a healthy sushi while keeping in mind that, in the sushi world, the trick to getting the maximum benefit is moderation.

Rinse rice in a colander or bowl until water runs clear out the bottom. Shake off excess water and allow to sit for half an hour. Place rice in rice cooker, add water and allow to soak for 30 minutes. Cook the rice, and then steam for 15 minutes. Mix vinegar, salt and sugar in saucepan; heat mixture over medium heat until sugar dissolves. Spread hot rice on a large, non-metallic plate or bowl and sprinkle vinegar mixture over the rice. Use a non-metallic spatula to fold the rice. Do not smash rice with the spatula! Use a fan to cool and remove moisture to the rice as you mix it. It should have a shiny appearance. Use rice as soon as possible.

Combine rice vinegar and sesame oil in large bowl. Add cucumber strips; stir to coat and marinate for at least 4 hours. Remove from marinade. Whip the sweet potatoes until creamy. Prepare a clean surface to make your sushi. A piece of plastic wrap on a flat surface works well. Place 1/2 cup rice on your flat surface and flatten so it is about the size of a nori seaweed sheet. Spread a sheet of nori on the rice; top with 1/4 cup of sweet potatoes. Sprinkle sesame seeds on the sweet potatoes. Place 1/4 cup cucumber strips in the middle of the sheet. Begin rolling up from the outside, dampening the edge as you go to seal it. Rice should be on the outside of the roll. Chill for at least 3 hours to allow flavors to blend. Slice with a damp, sharp knife into 1/2 inch pieces. Serve chilled.

Take a little rice in your hand and form it into a patty about the size and shape of the tuna rectangles. Spread a little wasabi on the tuna. Don’t overdo it; wasabi is spicy and no more than 1/2 teaspoon per piece will usually suffice. Spread the rice block on top and press gently into the tuna to form the sushi. Repeat with remaining ingredients until you have several sushi pieces.

If you have uncooked shrimp, skewer from head to tail and boil in a pot of salted water for three minutes, then transfer to a tub of ice water to stop cooking. Peel and devein shrimp if necessary. Moisten your hands with a mixture of cold water and vinegar. Take 1 1/2 tablespoons of rice and form into 2-inch rectangular blocks. It’s okay if the edges are rounded. Spread small amounts of wasabi in the slits of the shrimp. Place rice blocks on top of wasabi and press gently into the shrimp. Serve with soy sauce or your favorite Asian dipping sauce.

Get More Sushi Recipes with These Cookbooks