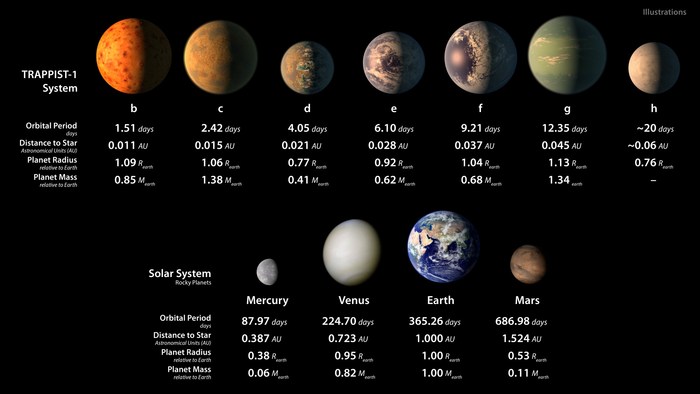 A comparison of the seven TRAPPIS-1 planets with worlds in our solar system. Image credit NASA

TRAPPIST-1 is rapidly becoming the talk of the entire Internet after NASA’s announcement that scientists have discovered a record-setting seven rocky planets orbiting this red dwarf star, which resides about 40 light-years from Earth. These planets are labeled B through H and three of them — E, F and G — reside within TRAPPIST-1’s “Goldilocks Zone,” which means they may be the right temperature to support life.

TRAPPIST-1 is a relatively cool star, which means that the “Goldilocks Zone” is pretty danged close to the star itself. For reference, Earth orbits our sun at an average distance of 1 AU. Planets E, F and G orbit at distances of 0.028 AU, 0.037 AU, and 0.045 AU from their host star, respectively. Naturally, this also gives them pretty fast orbits. Planet E whips around the star once every 6.1 days, F orbits every 9.21 days, and G orbits every 12.35 days. (Naturally, these are Earth days. Scientists believe that these planets may be tidally locked with their star, which would give them a “day” that is equal to the length of their “year.”) At these distances, the scientists behind this discovery believe that they probably formed farther out and drifted inward to their current orbits over time.

The star was named after the telescope in Chile that originally announced the discovery of three of the seven planets, which bears the name of The Transiting Planets and Planetesimals Small Telescope (TRAPPIST). Continued observations conducted using telescopes like Spitzer and the European Southern Observatory’s Very Large Telescope confirmed two of the planets and found the remaining five. Spitzer was used because TRAPPIST-1 is an ultra-cool dwarf star that shines brightest in ultraviolet light. The panelists did mention that it took some engineering effort to include Spitzer because this space telescope was not designed to look for exoplanets and, because it resides a fair distance from Earth, it was not possible to retrofit the telescope for this job.

As yet, these planets do not have official names, although the panelists who made the announcement on NASA TV did joke about proposing names based on Belgium beers when a social media participant posed that as a question.

The one labeled “H” still remains something of a mystery. Scientists believe that this planet has an orbital period of about 20 days and may have a high ice content. Other mysteries include whether any of these planets, especially the ones in the habitable zone, have a thick atmosphere and whether that theoretical atmosphere may contain high levels of oxygen, which may be an indicator of biological activities like photosynthesis.

“Answering the question ‘are we alone’ is a top science priority and finding so many planets like these for the first time in the habitable zone is a remarkable step forward toward that goal,” said Thomas Zurbuchen, associate administrator of NASA’s Science Mission Directorate in Washington.

Continued studies include work being done by NASA’s Kepler/K2 telescope, which is currently conducting observations that began on December 15, 2016, and will end on March 4, 2017. This will help scientists pin down the orbit of the seventh planet and may also help them refine their estimates of the planets’ masses and discover new planets in the TRAPPIST-1 system. All data from these observations will be made available to the public through an online archive.

The panelists at the NASA TV event announcing this new discovery were, naturally, enthusiastic about future developments like the planned launch of the James Webb Space Telescope, which will be better able to gather data on the composition of “rocky” exoplanets and their atmosphere if they have one. This telescope may, for instance, be able to detect free oxygen in an exoplanet’s atmosphere that may be an indirect sign of life on that planet.

Scientists involved in the discovery and continued observations of the planets around TRAPPIST-1 participated in a Reddit AMA after the announcement was made. Panelists included: