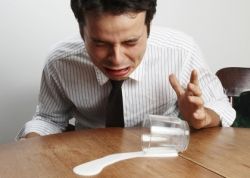 When you spill milk, the best thing you can do is just wipe it up and go get yourself another drink of milk, maybe with a lid this time. If you’re just plain having a bad day, I could see why you’d feel like crying, though. Sometimes a glass of spilled milk is just plain the last straw and that’s when people start looking at you funny, wondering why you’re sobbing over something so silly. Did you know there’s a whole day devoted to the saying, “Don’t cry over spilled milk?” That’s right, February 11th is National Don’t Cry Over Spilled Milk Day!

One Girl’s Solution To Spilled Milk

Those kids can be clever, can’t they? When things go wrong, just improvise.

Why Create A Day For Spilled Milk? 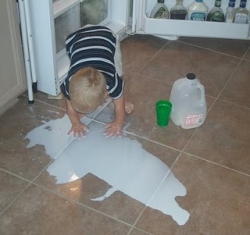 This kid has it figured out. Spilled milk can actually lead to a little fun if you’re creative enough. National Don’t Cry Over Spilled Milk Day is a reminder not to sweat the small stuff and the little accidents that happen in your everyday life. As we all know, accidents happen and sometimes they’re just not anybody’s fault even though sometimes we can be stubborn about doing things all by ourselves when it’s just plain not a good idea. When things don’t necessarily go exactly as planned, the best we might be able to do is turn it into a positive thing.

…It’s not worth being arrested over, either.

A 12-year-old boy faced charges of resisting law enforcement after he allegedly tried to run away from a police officer after refusing to clean up some milk he spilled. A law enforcement officer was helping to supervise in the cafeteria when the kid spilled his milk, refused to clean it up and tried to run off. The officer gave chase and the boy repeatedly kicked him in the struggle. The boy was handcuffed and later released to his parents. While there is no word on whether he was found guilty, he probably got off with a scolding and whatever punishment the school system and his parents had in store for him. And all this over a spilled glass of milk.

Recipe For People Who Don’t Cry Over Spilled Milk 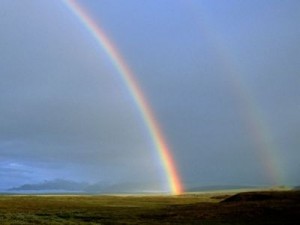 Take milk and cookies out to your sun deck. If you don’t have a sun deck, a room with plenty of windows works almost as well. Mix Rainy Day and Patch of Sunshine well. Look for the rainbow while you enjoy your milk and cookies. If you look carefully, you might even see a second, fainter rainbow not far from the first one. Share with your friends, and be careful not to spill the milk!

…but a little optimism does go a long way.